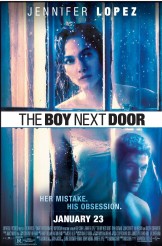 Movie Review: THE BOY NEXT DOOR

An old-fashioned (but for the sex) cheesy thriller

Back in the day, there were a lot more “woman in jeopardy” medium-budget thrillers and far fewer people questioned their underlying messages (unless the movies were made by someone like Alfred Hitchcock, in which case they were generally considered to be in some other genre).

In 2015, though, when Jennifer Lopez stars in THE BOY NEXT DOOR, it’s hard not to have questions about exactly what’s being said here, especially when an end tag informs us that the story is based on real events.

Lopez plays high school English teacher Claire Peterson, separated from her husband Garrett (John Corbett) for the last nine months due to his affair with a female coworker. Teenage son Kevin (Ian Nelson) hopes his parents will reconcile and Garrett is begging for another chance, but Claire is leaning toward divorce.

Shortly before the new semester starts, hunky young Noah Sandborn (Ryan Guzman) moves in next door to Claire and Kevin, there to help his ailing uncle. Noah is old enough to be in college, but “an accident” has held him back, so he’ll be attending the school where Claire teaches and Kevin is a student. Noah loves the classics and is able to quote Homer’s THE ILIAD, which delights Claire. Noah really, really likes Claire, and they can’t help notice they’re spying on each other from their upstairs bedroom windows, though Claire tries to hide this fact.

One night, while Kevin is away on a camping trip with his dad, Noah comes on to Claire. At first she says no, but then she gives in and they have sex.

And hold up here, people. In other hands, this could be the start of something dark and complex, but Rob Cohen’s direction and Barbara Curry’s script both make it very clear that we’re supposed to view this as a single mistake on Claire’s part.

And what a mistake it is. Claire says “no,” but instead of saying in firmly, she murmurs it, then stops saying it, kisses the guy back, and otherwise is clear to herself, Noah and the audience that she is an enthusiastic participant. To anybody who cares about the whole “no means no” discussion, this is already a disheartening development.

Noah is about to be a student at the school where she teaches, he lives next door and he’s clearly crazy about Claire. He’s also not chronologically an adult, which means that he’s at an age when people of all genders often equate the sex act with true love. This is visibly a recipe for disaster, even without – this cannot be really a spoiler to anyone who’s seen the film’s promotional materials – the fact that Noah turns out to be dangerously unbalanced.

Claire attempts to make it clear to Noah that this was a one-night stand and to prevent anybody else from finding out what happened. Since Noah goes from wounded adolescent to manipulative stalker to full-on psychopath in fairly quick order, we do have a measure of sympathy for Claire, but what she does is so unethical and just plain dumb that our main inclination is to wince. We can’t root for Noah because he’s too narcissistic and oblivious (and violent), but Claire takes every opportunity to let him down gently and instead makes things worse.

Lopez looks fabulous and gives a decent performance. Guzman finds the vulnerability in his character, and even manages to acquit himself reasonably as Noah becomes increasingly unhinged. Nelson is very likable as Kevin.

There are a couple of good scares, including one fake-out that’s so beautifully staged as to earn a gasp, a laugh and a bit of applause. THE BOY NEXT DOOR has its moments, but even though it is set in the present, it feels like a relic of a less reflective time in film history. Mostly, it takes a disingenuous road to a conventional destination.