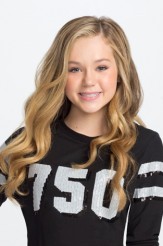 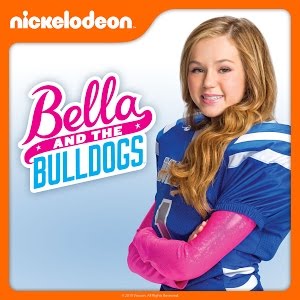 BELLA AND THE BULLDOGS poster | ©2015 Nickelodeon

In Nickelodeon’s new series BELLA AND THE BULLDOGS, Saturdays at 9 PM, Brec Bassinger plays Bella. Bella starts out as a Texas high school cheerleader who so impresses the school’s football coach when she tosses back a stray ball that he drafts her to become the team’s new quarterback. This doesn’t sit well with the team’s former male quarterback Troy (Coy Stewart).

Fifteen-year-old Texas native Bassinger previously costarred on another Nickelodeon series, THE HAUNTED HATHAWAYS, which she describes as a comedy. The young actress sits down to talk about tackling her new role as the first female quarterback in the history of Bella’s high school.

ASSIGNMENT X: Did you want to be an actress your entire life, or did you originally think you were going to be an airline pilot or something else?

AX: Did you ever have any thoughts about portraying a football player before BELLA AND THE BULLDOGS came along?

BASSINGER: No. I always messed around with football with my older brothers, but I never thought of playing it. But it’s really cool to play such an inspirational character, and I know so much more about football.

AX: Is Bella somebody who wanted to be a groundbreaker, or is this thrust upon her by her desire to play football?

AX: And what is her relationship like with her teammates?

BASSINGER: Well, she’s always a leader, but at first, they don’t like to follow her, because they don’t accept her, but after they’ve accepted her, they really do look at her as a leader.

BASSINGER: I think I just act like I think that person would act. I guess when I’m playing Bella, I just want to make sure she is very grounded. Yes, she has very good leadership skills, but she stays grounded and knows how to really talk to her team.

AX: Do you also do cheerleading on the show?

BASSINGER: I only did cheerleading in the first episode and then I became a football player, but yes, I did in the pilot.

AX: Does that experience – cheerleading in front of an audience – help with your acting?

BASSINGER: Yeah, absolutely. Cheer competitions, we had to get up in front of a whole crowd and try to do a performance perfect, and so because of that, I’m a little less nervous when I’m getting up in front of people.

AX: Does that give you more confidence in your movement as well?

BASSINGER: Yeah, it does. I feel a little better and more coordinated.

AX: Coy Stewart said that you both went to football camp for a couple of weeks to prepare for BELLA. How was that experience?

BASSINGER: It was really great. Not only did we of course work on form, but we worked on the overall cadence and presence of a quarterback, which I think is really important, especially when you’re playing one on TV.

AX: Can you give any specifics about what you learned that you’re able to use in your performance?

BASSINGER: Yeah. When you call the ball, you want to look around the field, give eye contact, stand up straight, show that you’re very demanding of your team but confident.

AX: When Bella gets tackled, are you in there at all, or are you standing there and they come up to you and then when you fall, they have your stunt double do that?

BASSINGER: Yeah, I’m there, and as soon as they come up to me, they bring the double in.

AX: Do you throw the football?

BASSINGER: Yeah. I’m the one throwing it, so that’s why I had to go to football camp. They really just wanted me to have the correct form, because they can CGI the football, but a lot of it really is my throwing.

AX: Is your throwing getting any better?

BASSINGER: Absolutely. The first time I threw it, it was horrible. I catapulted it and it had no spiral and now it’s tight and I’m a good throw.

BASSINGER: Right now, I’m mainly putting all my eggs in this basket and I’m really excited for it.

This interview was conducted during Nickelodeon’s portion of the Television Critics Association press tour.