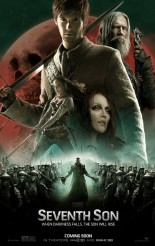 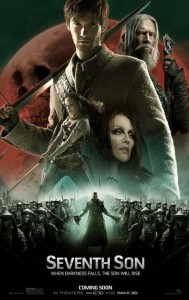 One can walk into SEVENTH SON knowing absolutely nothing about it and deduce within the first 10 minutes that A) it’s an adaptation of a young adult (YA) fantasy novel and B) that it was put together by people who don’t know how to tell one adaptation of a YA fantasy novel from another. The first turns out to be empirically true and the second seems the most likely explanation as to why SEVENTH SON seems so tone-deaf at almost every turn.

Based on THE SPOOK’S APPRENTICE by Joseph Delaney, SEVENTH SON introduces us to Master Gregory (Jeff Bridges), monster-killer and witch-hunter supreme in a nameless medieval realm. When one of Gregory’s seeming victories backfires badly, he finds himself in need of an apprentice. In fact, Gregory requires a seventh son of a seventh son, which leads him to Thomas Ward (Ben Barnes). Thomas craves adventure, but he may not have what it takes to kill people, even ones who aren’t entirely human.

This question of morality is a perfectly fine basis for a film, fantasy or otherwise, but SEVENTH SON doesn’t know what to do with it. Killing in the heat of battle isn’t exactly the same as killing a prisoner. While the movie gets as far as showing us a whole civilization that views Gregory as the monster, since Thomas is our protagonist and he never sees Gregory that way, there isn’t as much ambiguity as seems intended.

This wouldn’t matter as much if any part of the live action had some life of its own. There are transformation effects that are impressive and fun, but whenever characters start talking, momentum stops. The dialogue lacks wit, pathos and much in the way of personality, except for when Bridges or Julianne Moore as Mother Malkin is speaking. The filmmakers have unwisely insisted on forcing British actors Barnes and Olivia Williams as his mother to speak with American accents, which only makes this feel more generic.

There’s also some plain old laziness here. Being the seventh son of a seventh son is important here – heck, it’s the title of the movie – but Thomas has only two visible siblings (one a little sister). There’s absolutely no attempt to have any fun with the premise and, for that matter, anyone unfamiliar with the folklore about seventh sons won’t find much enlightenment. We never get an explanation as to why a key character who should have a very good notion of Thomas’ destiny has never shared this information with him. There’s also an eyebrow-raising detail here, which is that our heroes are white men, while all the baddies are women, minorities or both. If the intention was to create the atmosphere of an old-fashioned spectacle, there were better ways of doing it.

It is absolutely untrue that one fantasy quest film is much like another. Some are magnificent journeys, some are enjoyable if unmemorable jaunts and some, like SEVENTH SON, are long slogs, enlivened momentarily by moments of visual flair.