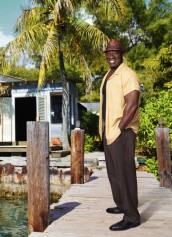 The actor talks the many different aspects of his character 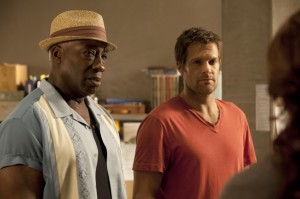 On Fox’s THE FINDER, which has its series finale tonight at 8 PM, Geoff Stults plays Walter Sherman, an Iraq war veteran who has survived a traumatic brain injury and is able to find anything or anyone.

Developed from Richard Greener’s THE LOCATOR series of novels by Hart Hanson, who also brought BONES to television, THE FINDER was introduced on BONES as a backdoor pilot, with Walter as an old frenemy of the older show’s Seeley Booth (David Boreanaz).

In THE FINDER, Walter’s best friend/lawyer/protector is Florida bar owner Leo Knox, who is played by Michael Clarke Duncan. Duncan, who hails from Chicago, had a number of film and TV gigs, including Michael Bay’s ARMAGEDDON, before he shot to fame as a supernaturally-gifted death row inmate in 1999’s THE GREEN MILE.

Duncan was nominated for a Supporting Actor Oscar for the performance. Since then, he hasn’t stopped working – some of his bigger film credits include Tim Burton’s PLANET OF THE APES, DAREDEVIL, SIN CITY, THE ISLAND and GREEN LANTERN – but THE FINDER is Duncan’s first series regular role.

This interview was conducted before THE FINDER was canceled by Fox.

ASSIGNMENT X: Were you looking to do a television show at this time, or did the character appeal to you, or how did you become involved with THE FINDER?

MICHAEL CLARKE DUNCAN: Well, you know, Hart Hanson got in contact with me, and Hart is one of the best executive producers I’ve ever met in Hollywood. He’s a down to Earth guy and he said this script was fantastic, he said that I could really grasp this character and take it to places that it’s never been. Once I got the script, I was all in, but really, once I met with Hart Hanson, I was all in.

AX: And your character Leo Knox is an enforcer, but he’s also very religious.

AX: So was one of the things that attracted you to the role that Leo has so many diverse aspects to him?

DUNCAN: You know what it was, really? I wanted to do something else that I’d never done before. I’d never done television, I’ve never done an hour drama, and this was a chance for me to break out of the rut of doing just the big guy roles. Even though I am still a big guy in this one, I put a little twist on it. I’m mean when I have to be, just like in real life.

AX: Do you have a favorite aspect of Leo?

DUNCAN: I like the badass parts. I was telling Hart Hanson I was going to co channel my Jack Bauer and be like 24, but there’ll never be anything like 24 again on television. So he said, “Michael, this is not that kind of show.” And I said, “Look, give me a gun, let me shoot some people and break some people’s necks and kill them, and I’ll be fine.” [They didn’t] let it go that way [laughs].

AX: In feature films, often actors are allowed to do more of their own stunts than they typically do on network television. Are there a lot of situations on FINDER where they’re saying, “You cannot do that”?

DUNCAN: I [like to reasonably] do as much as possible. I know you don’t want somebody to get injured doing something silly. We have stunt guys for a reason and I will let them do their job.

AX: Leo is also a poet. Have you written any of the poetry that he recites?

DUNCAN: I wish. [laughs] No, all that comes from a book. Maybe I should sit down and write some poetry, because I have a lot of emotions, so maybe I’ll try it one day, but no, it’s not from me. I’ve tried it, it sounded corny to me, so I tore it up.

AX: Danny Trejo showed up in the FINDER pilot as a Catholic bishop who’s a friend of Leo’s …

DUNCAN: I think Danny Trejo’s an excellent actor – I was watching MACHETE the other night, thought it was fantastic. I love everything Danny Trejo does, and we go way back. When I was doing commercials years ago, I met Danny Trejo, so he’s a good friend of mine. He’s a good actor and the tattoos are all real.

but he was late tonight. So when you see him, you let him know.

AX: Would you have wanted to do motion-capture rather than prosthetics if it had been available at the time?

DUNCAN: I always like to work. It all depends on what the script calls for, but I love my job and I love doing and being who I am. These apes [in RISE] were a lot stronger, a lot bigger than I was [laughs]. They turned over a bus collectively, so I don’t think we could have done that. But it was fun to watch.

DUNCAN: Taraji Henson and I have FROM THE ROUGH, and I have another movie called IN THE HIVE. It’s a Robert Townsend-directed movie and it’s really good. I’ve got a couple more things coming out.