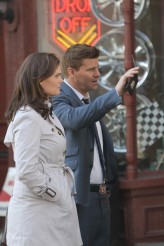 The character story is sweet and the murder of the week has an interesting twist, though there’s a B story that seems odd in where it doesn’t go

In the BONES episode “The Warrior in the Wuss,” the team investigates the murder of a short truck driver who was so defensive about his height that he wore lifts. On the home front, Booth’s (David Boreanaz) now eleven-year-old son Parker (Ty Panitz) comes for a visit, while at the lab, director Cam (Tamara Taylor) is perturbed by how much money Jack (TJ Thyne) is spending on new equipment.

The big arc aspect of the episode is obviously Booth and Brennan (Emily Deschanel) trying not to worry about how Parker is going to react to his baby half-sister Christine. When Booth catches Parker in what may be a minor lie (Parker says he’s been outside, but clearly has stayed indoors) and Brennan explores Parker’s room and finds that he’s apparently destroyed a toy and stolen photos, both adults become concerned that perhaps Parker is jealous. It turns out that Parker has simply been working on a surprise – a family-themed mobile to hang above Christine’s crib. Booth apologizes to Parker for chastising him (the lie was only in the cause of helping the surprise) and Brennan loves the gift and the thought behind it.

It seems unlikely that BONES would go down the road of severe sibling jealousy – this is not a show that could easily accommodate its main characters torn apart by a division of parental vs. partner/lover loyalties – but this is a particularly gentle and pleasing way of showing how Parker integrates into the Brennan/Booth/Christine family unit when he’s present. Bonus points: the mobile is really sweet, yet seems plausibly like something that a handicraft-capable kid could make.

On the murder mystery front, lab intern Clark Edison (Eugene Byrd) has clearly gotten over his squeamishness about hearing personal details from his coworkers. The victim in the case was stabbed to death. The lead-up to this turns out to have been that the man forced his young son to take martial arts. When the son was bested by the teacher’s child – a daughter (Peyton Roney, impressively controlled) – the man tried to pick a fight with the girl. The girl successfully defended himself, a video of the fight went viral and the victim got drunk and belligerent at a bar, with the result that he was killed by a competitor who saw an opportunity to take over a new truck route.

What’s cool about the structure here is that we really don’t expect the age and gender issues to come into the story, and when they do, everything plays out plausibly and almost poignantly. We see that bullying turned the victim into a bully, something that ultimately led to his demise, but we feel for him at the same time we deplore his tactics.

Then there’s the matter of Cambeing upset by Jack going over-budget. This seems like it might be a good time for Jack to fess up about being very, very rich and simply donate the expensive equipment to the Jeffersonian lab, rather than make it come out of sparse funds and cause Cam stress that could be easily avoided. Perhaps this is going somewhere; if not, this all seems a little churlish of Jack. It does provide a good dialogue exchange, with Camasking Angela (Michaela Conlin) to try to persuade husband Jack to return some of his purchases, and Angela replying that she cannot afford to use up wifely manipulations on something like the lab budget.

“The Warrior in the Wuss” is key in terms of illuminating the Brennan/Booth family dynamic, and also strong in how it deftly works an impressive amount of socio-psychological commentary into a deceptively smooth-seeming procedural.