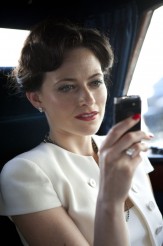 The literary figure Irene Adler lives up to her surname – she is the only woman ever to addle Arthur Conan Doyle’s famous detective Sherlock Holmes. With that sort of power, it’s no wonder the character turns up to bedazzle and bedevil Holmes in SHERLOCK, a contemporary take on the sleuth developed by writers/producers Mark Gatiss and Steven Moffat for the BBC. Season Two begins nex Sunday, May 6, on PBS at 9 PM in the U.S. (Season Two previously ran on the BBC starting New Year’s Day).

Pulver has a substantial stage career in her native England. She played Isabella in the recent BBC version of ROBIN HOOD and Sookie Stackhouse’s goblin fairy godmother Claudine in TRUE BLOOD. The actress is clearly delighted with SHERLOCK and has quite a few stories from the set – some of them even concerning THE HOBBIT, which features Freeman in the title role of the young Bilbo Baggins and Cumberbatch as the dragon Smaug.

AX: Had you read a lot of Sherlock Holmes stories before you became involved with SHERLOCK?

LARA PULVER: No. I’d read some of the Conan Doyle stuff in high school, but I hadn’t touched it once. I got the project and started two days later and fortunately, Steven Moffat had written such a well-rounded character that I went into it knowing she was of American origin and there were little things that I thought if I want to work them in [it can be done], but it’s knowing that they’re there, they’re somewhere in the layers of the character that I was building.

AX: Does Irene Adler have an American accent in this?

PULVER: Oh, no, because she didn’t spend the majority of her life there, I believe.

PULVER: There’s something in them both – they’re feminists in a weird way, aren’t they? [laughs] It’s using the power of being a woman. I feel for both characters. There are similarities. I’d say [the difference is more pronounced] in TRUE BLOOD, in the sense that she wasn’t who she really was. She was of the goblin world and protecting herself [by pretending to be] a fairy. In SHERLOCK, I’m not even sure that she’s aware – I don’t know that awareness of her being different even enters her mind.

AX: Irene Adler is famously the only woman to be of interest to Sherlock Holmes. Do you and Benedict Cumberbatch play your scenes as though Sherlock is an emotional, if not a literal, virgin?

PULVER: That’s not our intention at all. I don’t want to speak on Benny’s behalf, but I don’t think that’s his intention either when he’s playing it. I think [Sherlock has] never met his match in that way, and I think other things have always preoccupied his brain. I think on the list of one to ten, sex has been at the bottom [laughs].

PULVER: He’s a very charming man in essence. He’s also very intelligent and he has an intensity that’s quite alluring. In anybody else, it could be so intense that it’s too much, it’s repellent. For him, it’s completely new and he cares and he’s funny. He has a great sense of humor. He’s also a public schoolboy, a British schoolboy, and I don’t mean to generalize, but he and Martin have a wonderful sense of humor. They’re both very witty, funny men. And also, you have to be at the top of your game to do a show like SHERLOCK. You can take more risks, and so he has that freedom. He has this real freedom going on. He’s a sensitive being and he’s a great guy. I can’t speak highly enough of him.

AX: Was there any discussion among the three of you about playing non-humans, since Cumberbatch is playing a dragon, Freeman is playing a hobbit and you’ve played a goblin?

PULVER: No, but there was a wonderful moment where there was a picture of an Australian tribe dancing around in the Guardian newspaper. And Ben cut it out and [the people in the photo] had these masks on one of these funny kind of feet-claw things, and he said, “Look, it’s Martin Freeman in THE HOBBIT!” So there’s a great banter on the set with that type of stuff.

AX: It seems that, especially on British television, when characters are very intelligent, they’re sometimes given some very tongue-twisting dialogue. Did you have any difficulty with any of Irene’s speeches, or did you show her intelligence by not speaking?

PULVER: Both. A lot of what Irene is is what she doesn’t say. However, I sat there in support of Benedict, who has these wonderful kind of analytical deciphering monologues that he does at amazing pace. But yeah, that’s his bag and not mine, I believe.

AX: In the course of playing Irene Adler, you had a nude scene, which you did without what are termed as “modesty garments.” There was a production reason for this …

PULVER: [SHERLOCK director Paul McGuigan)  just said to me, “This is going to take so long to do, because if we’re not hitting marks exactly for every take, we can’t use it, because we’ll have [trouble matching the shots in editing if any of the protective garments show]. You’ve got a choice. We can either do that [try to avoid filming the underwear] all day, or we can get it all off and you have to completely trust us – obviously, we can’t use anything that exposes you anyway.” And yeah, that’s the choice that I made, that I was literally in shoes and earrings and lipstick. It was so weird. The first couple of takes, you’re very aware that you’re naked and it’s all that goes on in your head, and then all of a sudden, there’s something that changes the whole dynamic of the scene where I’m naked, and actually, I’m the complete power-head in the scene. I have all the power. It’s like Benedict said, it’s just a device to gain control over the most intelligent man she’s ever met. So the second you take that completely on board, it is just a device, so there will be a certain take where I turn to Martin and I would not continue the scene, because it was my line, until he looked at my breasts. Because I thought that’s what [Irene] would do. She would stand there, she would make him feel completely uncomfortable and then he would just literally give in and off he would go. It was like one-nil. It’s a complete game of chess.

AX: Did you have to do a special workout and/or anything else to prepare for the scene?

PULVER: Waxing was on the agenda. That was something we had to do. A friend of mine, Luke Evans, was in the recent IMMORTALS movie – for IMMORTALS, they put [the actors] on this training regime called Tabata, which is a form of circuit training. It’s literally just to get them lean and ripped. And I was like, “Okay, I don’t need to look gladiatorial, but quick, get me lean and ripped!” [laughs] And so he sent [the workout program]  to me, and for about three weeks, I jumped on that bandwagon. And it was great, actually. Obviously, you have to do the diet with it, which was just protein and salad or protein and vegetables every three to four hours. And I did that for three weeks during the shooting of SHERLOCK. And then after I shot that scene, the naked thing, the first thing the dresser did was say, “Do you want a Snickers?” And I went, “I so want a Snickers!” [laughs] And we shared a Snickers as a celebration.

AX: You had a different kind of challenge in TRUE BLOOD, working with the goblin makeup. Did you know going into it that you were going to have to wear prosthetics at some point?

PULVER: No, no, the goblin story was developed later on and it meant I was in the [makeup] chair for three hours.

AX: Had you ever done anything like that before?

PULVER: No, I’d never used prosthetics before, and they did an amazing job.

AX: Did that have an effect on your performance, make you feel that you wanted to be bigger or smaller?

PULVER: Totally. Well, working with [TRUE BLOOD show runner] Alan Ball gives you any license to do what you want anyway [laughs], because he encourages that craziness, but it definitely gave me a theatrical license.

AX: Are you mostly based in London or Los Angeles?

PULVER: Mostly, I’m inLos Angeles. I have a house in both. It’s completely project-based, because something that’s even American can often be filmed inEurope. It’s just one of those things. Something that’s British-based can film inSouth Africa.

AX: Is there anything you do to relax during downtime while you’re working?

PULVER: After a day’s shooting, I’ll make brownies and cookies. Often I take them to the set. The crew like me [laughs]. It keeps them happy.

AX: Were you able to bake while you were on the gladiator diet, or did you have to avoid baking during that time?

PULVER: I was in a hotel room, so I didn’t have kitchen facilities in order to spoil them. A happy crew makes for a happy show, so if that means feeding their bellies, great.

AX: You’ve been working steadily for a long time, but now you’re getting more public and press attention. Does that have any effect at all on your approach to your career?

PULVER: I’m mostly just living in the moment, because [press attention] can come and go. Longevity for me is everything. I think it’s more about the craft and the work, in theU.K., for sure. The fame element, if that comes, it comes. People I think are foolish to become an actor to get famous, because it’s too hard work. If you want to get famous, go do one of these crazy reality TV shows, or whatever it is, but acting is not an easy profession, and it’s gregarious and precarious and so therefore the fame element I don’t think is a part of it. It’s work, it’s a craft. Especially for so many of us [who go back and forth] from theatre to TV to film.

AX: Is there anything else you’d like to say about SHERLOCK?

PULVER: No, not that comes off the top of my head. Just watch it. Watch it.