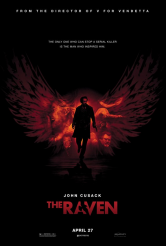 It’s very hard to pull off this type of plot with a straight face – THE RAVEN tries, but it doesn’t fly

There is a staple of detective police series, where some unhinged reader/viewer stages crimes described in fiction and/or film, and the author – after being ruled out as a suspect – is brought in to help with the investigation. This has been done relatively recently on BONES and CASTLE (both shows with mystery writer protagonists), the SCREAM movies, the Dirty Harry movie THE DEAD POOL, et cetera. Then of course there’s THEATRE OF BLOOD, with Vincent Price as an incensed Shakespearean actor killing his critics in manners suggested by the works of the Bard.

The notion of a killer staging deaths described in the manner of the stories of Edgar Allan Poe certainly has promise – Poe is still celebrated as one of the most potent horror writers ever. However, the movie THE RAVEN, as written by Ben Livingston & Hannah Shakespeare and directed by James McTeigue, fails to take into consideration one big challenge of their premise – it’s hard to take it entirely (if at all) seriously. In real life, serial killers who are trying to send a message to someone other than the victim are rare. The concept of murder as a form of literary criticism/commentary is generally fictional and audiences are aware of this now (if they ever were not). The projects addressed in the paragraph above address said challenge by being a little or a lot tongue-in-cheek. THE RAVEN, however, is very serious, and the dissonance between its dramatic intentions, its events and its execution generates something of a mess.

When we meet Edgar Allan Poe, played by John Cusack, he is sitting dying on a park bench. We are informed that no one knows exactly what caused his death. THE RAVEN puts forth one explanation. Poe is famous but impoverished, drinks to excess, is suffering from writer’s block and still mourning the death of his wife. However, all is not dark in Poe’s world – he is in love with the beautiful, young Emily Hamilton (Alice Eve), who reciprocates Poe’s affections. However,Alice’s wealthy father Captain Hamilton (Brendan Gleeson) loathes the penniless Poe and threatens to shoot him if he sees him.

Unknown to Poe in the midst of his wooing and attempts to cadge drinks, someone inBaltimoreis staging grotesque murders that are recreations of sections of Poe’s work. Police detective Emmett Fields (Luke Evans) recognizes an element of the crime scene and brings Poe in, first for questioning, then for assistance. Inevitably, the case becomes a personal life or death matter for Poe.

Let’s first note that there are some worthy scenes. Some of the dialogue is very witty. A masked ball, a la Poe’s “Masque of the Red Death,” is visually sumptuous, though in another one of the script’s problematic issues, is not staged by the killer but rather something that was going to happen in the movie’s universe, serial deaths or not. There’s a simply great bit where Poe is teaching a poetry class and says something wonderfully surprising, which demonstrates that the movie could have done better if it had kept this vision of its protagonist closer to the fore.

However, the overall melodramatic nature of the narrative aspires to emotional notes it cannot hit. There are attempts at irony that fall flat because the whole enterprise is overall very earnest, yet reaching for some kind of dramatic resonance. The plot specifics also require some faux-Poe prose that seems a little hubristic.

The story also leads, inevitably, to the villain explaining to the protagonist why all of this happened, and it sounds like a crock. Obviously, one can’t name the actor who delivers this speech without giving the game away, but he deserves praise for doing it as well as possible.

Poe is written here as a humbled yet word-proud man and Cusack, normally a wonderful actor, doesn’t seem entirely comfortable with the egomaniacal flourishes required. Evans is more comfortable as the dedicated, if not well-fleshed-out, detective. Eve seems far too contemporary for a heroine of the mid-nineteenth century, though the always solid Gleeson delivers as her father.

John Cusack, Edgar Allan Poe and a murder mystery seemed initially like a wonderful combination. However, when filmmakers are determined to go for tragedy at the same time they’re re-inventing the crazed stalker subgenre wheel, the results are likely to be what we get with THE RAVEN.