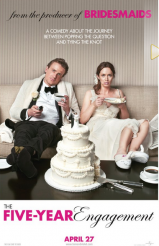 THE FIVE YEAR ENGAGEMENT is pretty much what you would (or have come to expect) from this particular niche of comedy. It’s almost like an R rated SLEEPLESS IN SEATTLE…which is not really a comparison, but more of an origin for this type of romantic comedy.

Certainly BRIDESMAIDS was a big part of the founding of this new off brand of adult comedy that pokes fun at being married, or getting married, or the road to the alter, but the two films (even though they will be compared because they were produced by some of the same producers) are pretty different.

ENGAGEMENT has its fair share of penis jokes, and body humor, but at its core it feels more like a chick flick movie than a down and dirty PORKY’S comedy. BRIDESMAIDS did have some adult (non sexual or fart related) moments that were about relationships, but those were few and far between. ENGAGEMENT is actually more of a focus on the relationship and disintegration of the relationship between Tom (Jason Segel) and Violet (Emily Blunt).

This is actually kind of a hard movie to describe and review. It’s a comedy with strong relationship drama hidden beneath the comedic plot. There’s lots of genuine emotion going on between the leads, but after the first 15 minutes the plot derails and the pacing slows way down.

Once the couple is relocated to the frozen wastelands of Michigan everything suddenly seems to crawl towards the inevitable break-up. Having done time in North Dakota, all of the scenes in the Midwest seemed very close to home, and the adjustment of Tom to the snow, ice, and basic bleh of living in winter was not only fun to watch, but also very true to form.

You want Tom and Violet to be together. Despite everything that happens between them, including some fur covered deer foot steins; you really want these two people to be with each other in the end.

The supporting cast is fun and Alison Brie just seems to be everywhere these days. Between movies, MAD MEN, and COMMUNITY she is all over the place! Plus in this film she has one of the best scenes, which also involves Elmo and Cookie Monster.

The film is fun, cute, and somewhat cuddly. It’s a sort of standard Jason Segel film where nice guys don’t always finish last. He and Blunt have really great on screen chemistry and there’s plenty of laughs even in the slower bits to keep the story going. Look for a hand-knitted tux to make a very special appearance.