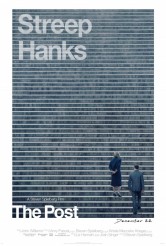 For some, the feel-good movie of the year 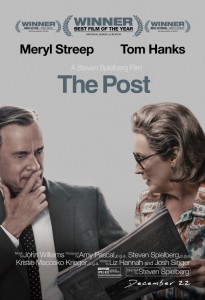 A 1970s-set drama about a newspaper in Washington, D.C. may not sound like the feel-good movie of the year. However, for those who felt 2017 was the epitome of an absurdist political nightmare, THE POST may bring perfect holiday cheer.

While Watergate ultimately got the bigger press – think ALL THE PRESIDENT’S MEN (which this film is a spiritual prequel to) and Richard Nixon’s resignation – the Pentagon Papers raised quite a lot of legal, political and moral questions. The Pentagon Papers is the popular name given to a top-secret Department of Defense study of the U.S. involvement in Viet Nam from 1945 through 1967. Daniel Ellsberg (played in the film by Matthew Rhys), a former military analyst who was appalled by what the contents revealed about the U.S. government’s attitude, leaked copies of the report to the New York Times and the Washington Post in early 1971, when most of THE POST is set.

The Times was the first to publish part of the story, so why is THE POST about the Post? Well, here is where the story has its twists. Katherine “Kay” Graham (Meryl Streep) is now owner and publisher of the Post, following the suicide of her husband, who had been given the paper after the death of its original owner, Kay’s father. Even though she’s technically in charge (and has an enormous amount of wealth), Kay has trouble getting any of the men around her, from Post editor-in-chief Ben Bradlee (Tom Hanks) to her board members, to actually listen to her, or even stop talking over her.

Part of what THE POST is about is Kay finding her voice and her backbone. Streep and writers Liz Hannah and Josh Singer make this transformation delicious to behold, a matter of small steps rather than grand gestures. Kay and Bradlee are presented with a series of challenges. The first is the papers themselves, which show up literally in a plain brown wrapper.  Kay is faced with an ethical conflict. Then the U.S. government weighs in, forbidding the Times to publish any more of the papers. Does the Post see that it’s surely next in line and back down, or does it publish anyway?

Since THE POST exists as a big-budget movie directed by Steven Spielberg, there’s not much surprise in the outcome, but there is still suspense. No one is trying to reinvent the wheel in terms of visual or narrative style, but everything is executed with crisp professionalism and enthusiasm. The spectacle of seeing people pondering freedom of the press versus the potential loss of literal personal freedom in a fight against the government is so timely that it feels like the movie was made as a response to 2017, although it was in the works well before last year’s U.S. presidential elections, to say nothing of the attacks on journalism this year. 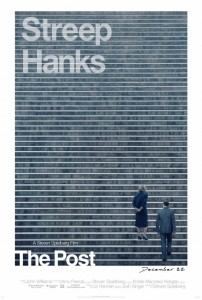 But THE POST isn’t a thudding message piece. It’s got a lot of humor, a driving sense of pace, smart details, a convincing period feel and ace performances across the board. Although Hanks at times seems to be struggling with an upper-crust East Coast accent, he’s still overall great as Bradlee, a joyous ruler of his newsroom kingdom.  Rhys is excellent. Others in the cast, all worthy of commendation, include Sarah Paulson, Bob Odenkirk, Bruce Greenwood, Carrie Coon, Tracy Letts, Bradley Whitford, Bruce Greenwood, Alison Brie and Jesse Plemons.

If you are looking for a story of a woman’s awakening to her own strength, a story of earned mutual respect, or a story about a victory of truth over propaganda, THE POST is the New Year’s gift for you.