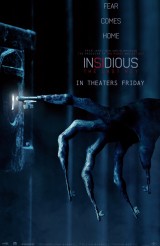 A horror movie with a welcome heroine 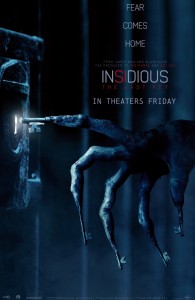 Leigh Whannell, who has written all the INSIDIOUS films (he shares screenplay credit on 2), is back to supply the script on this edition. He’s faithful to the mythology postulated in the first one, where a Purgatory-like dimension known as the Further contains both souls of the not-quite-dead and demonic entities who want to enter our world and wreak havoc. Director Adam Robitel is new to the franchise, but he proves adept at sustaining tension and staging jump scares that don’t generally come exactly when expected, which makes them work better.

In 1953, we’re introduced to young Elise (played as a child by Ava Kolker) and her little brother Christian (Pierce Pope). The family home is near a penitentiary, where their troubled father (Rob Stewart) is a guard. Elise can see and communicate with spirits, which is a problem in a house that’s full of them. A bigger problem is that her father doesn’t believe in her gifts. There’s also a presence that wants Elise to supply it with keys that open mystical doors.

As an adult, Elise (played by Lin Shaye in her fourth go-round in the role) is a parapsychologist who feels duty-bound to help people beset by the paranormal. When Elise gets a phone call from the understandably spooked current tenant (Kirk Acevedo) of her old family home, Elise hesitates, but ultimately takes the case. She and her two younger sidekicks, Specs (screenwriter Leigh Whannell) and Tucker (Angus Sampson), head out to face Elise’s old demons, both figurative and literal.

Certain storytelling elements can be anticipated, while others make great sense but we don’t see them coming. Perhaps the biggest narrative flaw is that the title issue of the key is never fully resolved, though this may be to provide story material for the next film (assuming there is one).

Something that should be addressed is the charm of a horror franchise that centers around Shaye’s unapologetically older woman Elise. Given that the genre is constantly being criticized (sometimes rightly) for its attitude toward women, INSIDIOUS is something to celebrate on this front. Elise has authority not because of sex appeal or even physical strength – she’s on the petite side and generally unarmed with anything heavier than a flashlight – but due to complete integrity. Shaye owns everything Elise does with wonderful conviction. Elise is always aware of her own psychic gifts, even when she is despondent at what they show her; Shaye’s joy in playing the role comes across in those darker moments as monumental determination.

As a horror movie, INSIDIOUS: THE LAST KEY is well-done and enjoyable. As a vehicle for an older actress, it’s pretty great.