MASTERS OF SEX: Creator Michelle Ashford on Season 4 and beyond – Exclusive Interview

The creator talks about the latest season of the Showtime series 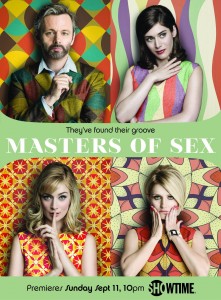 In Season 4 of Showtime Network’s MASTERS OF SEX, Sunday nights, we’re in the Sixties. However, things don’t start out too swinging for Dr. William Masters, played by Michael Sheen, who has lost his wife Libby (Caitlin FitzGerald) to divorce and his practice to scandal. He’s also lost beloved professional partner and sometimes lover Dr. Virginia Johnson (Lizzy Caplan) to another man, or so it would seem.

MICHELLE ASHFORD: It’s the most delicious time in history, the late Sixties, and so there’s a lot of fun with that. I really feel like the notion of revolution is really paramount in our season, that certainly is going out in the outside world, but every character is undergoing remarkable transformations. So it’s a revolution for everybody, and I think that’s really fun.

AX: Were there particular political points in that era that you wanted to get in that maybe were not immediately part of the Masters and Johnson story?

ASHFORD: Well, I knew that we started with that protest for the Miss America pageant. It was always in my mind as the beginning of the episode, because I was always really liked that notion. Because [the protesters] were screaming about not wearing bras, and Virginia Johnson actually is a woman who looks good in a bra and likes wearing a bra. So I thought it was a good way to show that the times have not only caught up with her but, in a weird way, have passed her by, so she went from being a revolutionary to a woman maybe who has more traditional views than some women. So that was one thing. But we didn’t cherry-pick events that we wanted to head for. We really were thinking about, “Where are our characters?” So we’ve really worked hard on that.

AX: Now that Bill Masters and Libby, played by Caitlin FitzGerald, are divorced, did you have to figure out how to keep Libby in the story?

ASHFORD: Libby has a fabulous story this season. Fabulous. In fact, she’s in a way the one who started as the most closed and a housewife and a very limited life. She ends up with a very big and interesting life. So she’s a fantastic character this season.

AX: Did you have to write Annaleigh Ashford, who plays Betty, out for awhile because of her Broadway work and her doing ROCKY HORROR PICTURE SHOW for Fox Network?

AX: Since there were several major plotlines dealing with Betty’s infertility, she’s one character who really cannot be pregnant …

AX: Is your writers’ room still the same?

ASHFORD: It is, yeah.

ASHFORD: We certainly would not go more than six, for sure. So yeah, about five or six. We’ll finish our story either in one [more] season or two.

AX: What’s the most gratifying reaction you’ve gotten so far to MASTERS OF SEX?

ASHFORD: It’s funny. Our fans are a really kind of great bunch. The people that love us – we’re certainly not for everybody, but the people that love us, love us intensely. And the greatest compliment I’ve gotten – I’ve heard it twice, from two different people – is that this is all they talk about in therapy [laughs], that they go to therapy and we’re the main topic of conversation. So I think, well, we must be tapping into something interesting.

AX: Do you have any other projects that you’re working on as well as MASTERS OF SEX?

ASHFORD: I always have had things I’ve been dragging around since before this even started, a couple of movies, and I have a miniseries at HBO about Lewis and Clark that I’ve been working on for ten years. It got all developed, and got far, and now it’s having sort of a reset. I’m part of the reset, so we’re resetting.

AX: And what would you most like people to know about Season 4 of MASTERS OF SEX?

ASHFORD: It’s a revolution, and they should show up for it.

This interview was conducted during Showtime Network’s portion of the summer 2016 Television Critics Association press tour at the Beverly Hilton Hotel.