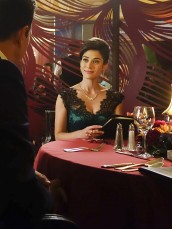 The actress talks how her character views her Season 3 relationships 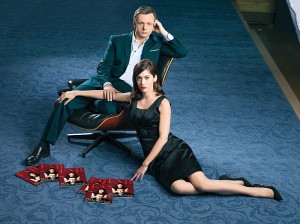 In Season 3 of Showtime Network’s MASTERS OF SEX, Sundays at 10 PM, we’re now in the Swinging Sixties. Virginia Johnson, the real-life sex researcher played by Lizzy Caplan, is frequently at odds with her collaborator/lover Dr. William Masters (Michael Sheen). This isn’t unusual for the two of them. What is different is that Virginia has allowed herself to try to have an actual relationship with another man, perfume tycoon and investor Dan Logan, played by Josh Charles.

Caplan, a 2014 Emmy nominee for her portrayal of Johnson, talked about what’s new for her character this year in MASTERS OF SEX.

ASSIGNMENT X: Do you think Johnson is genuinely interested in Josh Charles’ character Dan, or is that to just get out from under the stress of dealing with Masters all the time?

LIZZY CAPLAN: Well, in Episode Five, what prompts her to ask him to dinner the first time is an exchange between Johnson and her mother. So there are lots of things in play. Johnson at this point is looking for something that belongs only to her. She doesn’t have very many things like that. But does she see Josh Charles’ character as a romantic interest from the moment he walks through the door? Absolutely not. He’s not even the investor that she wanted to select. He sort of sneaks up on her. But the real story we’re basing this on, it’s one of the more interesting chapters of their story, because you get to see Virginia as this woman who has this unbelievably complicated romantic/non-romantic, convoluted, complicated relationship with Masters, which is the core of our show, and any other romantic interest that has come in and out has always been far more into her than she’s into him. All the men that she dates and any romantic relationship outside of Masters, she’s always in the power position, in the driver’s seat, and she always likes the guy a bit less than he likes her. The perfume character is interesting because it becomes a proper love story, and it’s really important to me for us to play this story in the show, because you never get to see Johnson fall in love in a romantic way and be treated with a light romantic touch, ever. And obviously, Josh’s character has far more layers than that, but that’s a big part of it.

AX: MASTERS executive producer/series creator Michelle Ashford took some dramatic license in adapting the biography by Thomas Maier for television. Playing her, do you see Virginia Johnson more as a historical person or as a created character?

CAPLAN: It’s a combination of the two at this point. I don’t see really how else I’d be able to look at it at this point in time. The first season, we were rooted very firmly in what was historically accurate when it came to the two main characters. The second season explored a period in their lives that was dark in terms of what’s available in the source material. There’s almost a decade between when they met, which was the focus of our first season, to publishing the first book, which is the focus of the third. So the second season, we were given quite a lot of artistic liberties to come up with what was going on behind closed doors between these two people. So going into Season 3, because so much of Season 2 was our own design, I now see her as this complete combination of the historical woman that I’m playing and the television character that I’ve created.

AX: How much is known about the real Virginia Johnson?

CAPLAN: Well, our source material is very limited. They were very, very private, secretive people when it came to their personal lives, and so the book, written by Thomas Maier, MASTERS OF SEX, that’s pretty much it. [The book is derived from] interviews with Virginia at eighty-eight years old, Bill Masters has already passed away at that point, and it’s an eighty-eight-year-old woman looking back on the most important relationship of her life with a lot of mixed feelings and a lot of, I think, justified resentments. And so from that, I try to comb what is true and what is revisionist history, because she’s an angrier woman looking back at some of the things that happened.

AX: Would you say that Johnson thinks she understands her feelings about Masters, and is she correct in her beliefs about what those feelings are, or does she not even think that she understands, because it’s so complicated?

CAPLAN: I think they both think they have a pretty good handle on it, but it’s a more complicated answer than that, because it’s such a difficult relationship to define, and because neither character ever says to the other exactly how she’s feeling or he’s feeling, and because it’s such a loosely defined relationship, they always have an out. They can always say, “Oh, no, it’s the work, this isn’t a romantic relationship.” Any time they approach vulnerability and it gets too scary for either of them, they have a way out, an escape route. And so I think she protects herself by not being able to define it. If they have that conversation about what they are, all of a sudden, she can’t deny what they are. So I think that she would keep that nebulous subconsciously on purpose.

AX: He did say to her at the end of Season 1 something to the effect of “I can’t function without you.”

CAPLAN: Sure. But he doesn’t say, “I love you,” and [what he says] could be defined as, “I can’t keep the work going without you.” It’s ambiguous on purpose always in this show.

AX: As a human being, that’s crazy-making, but as an actor, is that the most enjoyable?

CAPLAN: Yes. It’s not ambiguous to me. I have to understand what Virginia is thinking and justify everything she does so I can play the character in a truthful way. And then I have to make that make sense in this very confusing situation. So yeah, it’s challenging, but that’s the joy and the challenge of the job.

CAPLAN: I have two movies coming out. One is called THE NIGHT BEFORE, it’s coming out in November, it’s a Seth Rogen/Joseph Gordon-Levitt Christmas comedy, and then I did a movie called NOW YOU SEE ME 2: THE SECOND ACT that comes out next summer.

AX: Did you have to learn magic for NOW YOU SEE ME?

CAPLAN: Yes, I did. I had to go to cardistry school and work with magicians. It was one of the more fun experiences I’ve ever had.

AX: And what would you most like people to know about Season 3 of MASTERS OF SEX?

CAPLAN: There’s going to be a Season 4, so you probably should watch Season 3 so you know what’s happening.

This interview was conducted during Showtime Network’s portion of the Television Critics Association summer press tour at the Beverly Hilton Hotel.