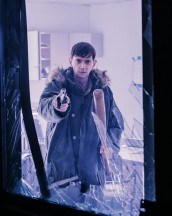 The actor talks the new season and getting physical 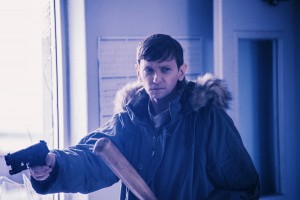 Actor DJ Qualls is at Amazon Studios’ section of the Television Critics Association to talk about his new Amazon Prime series THE MAN IN THE HIGH CASTLE. The pilot, about an alternate history where Germany and Japan won WWII, debuted last year; the rest of the series becomes available in November.

Our conversation with Qualls about HIGH CASTLE will run when the series premieres. Meanwhile, his Syfy series Z NATION, about a fast-running zombie apocalypse, is returning for its second season Fridays at 10 PM. Qualls plays Simon Cruller, aka Citizen Z, who’s been trying to keep scattered survivors informed from a remote Arctic NSA station where he’s stranded. The end of Season 1 left Simon – and everybody else – in dire straits.

ASSIGNMENT X: How are you scheduling the shoots of MAN IN THE HIGH CASTLE with Z NATION?

DJ QUALLS: This production [HIGH CASTLE] is lovely. They have accommodated every single request Z NATION has made for me, from Comic-Con to flying down there to press obligations to actually shooting the show. It helps, the fact that we’re in Vancouver shooting shooting MAN IN THE HIGH CASTLE, and they shoot Z NATION in Spokane, Washington, which is fairly close. So yeah, I shoot a week on [HIGH CASTLE], and then I head back [to Spokane] for four days.

QUALLS: By far, Z NATION is so physically demanding. Because my enclosure is destroyed this year, I’m out on the landscape, beating things to death with baseball bats, rolling off roofs, shooting guns. So I feel like [on HIGH CASTLE], it’s all cerebral, and I go up [to Z NATION] and it’s like four days of exercise.

AX: What would you most like people to know about Season 2 of Z NATION?

QUALLS: It’s more of everything that you loved from the first one. It’s gorier, it’s faster, it’s funnier. We really ramped up the action in Season 2. The stakes are much higher.