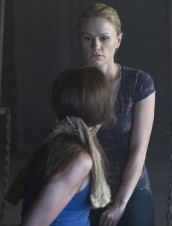 Bill Compton, we love you, but you’re an idiot 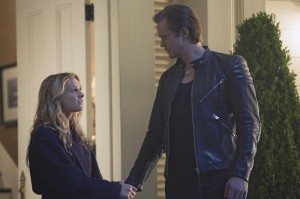 In last week’s episode of TRUE BLOOD, we were reminded why human/fey Sookie Stackhouse (Anna Paquin) and vampire Bill Compton (Stephen Moyer) fell in love in the first place and work so well together, as Bill opened up emotionally and sexually to Sookie and she responded. This week, in “Almost Home,” we remember why so many people get so infuriated with Bill – his suicidal guilt that wreaks havoc not only on him but on everyone around him. (We all recall what happened at the end of Season 6, when Bill was so tired of the guilt that he decided to drink Lilith’s blood and screwed up the world, right?)

Sarah Newlin (Anna Camp), hiding in the old Light of Day Institute grounds, has decided that she will die and be reborn to save the world, a la Jesus Christ. When Eric (Alexander Skarsgard), Mr. Gus (Will Yun Lee) and Co. find Sarah, Eric is ready to rip her throat out – until Pam (Kristin Bauer van Straten) points a silver-loaded gun at herself and threatens suicide if Eric destroys the cure for Hep-V. Eric drinks from Sarah, is promptly cured and feels a whole lot better about everything.

It turns out that Sarah is too perfect as a cure from a business standpoint, Mr. Gus explains when they’re all back at Fangtasia. Sales will be much better if they create a serum that has to be taken over and over for vampire health. Eric and Pam, not being terribly civic-minded about vampire-kind, think this is fine.

Eric goes to see Sookie at Bill’s house to let her know he’s okay. Sookie of course wants to know how Eric was cured; Eric hadn’t realized Bill was sick. Eric doesn’t want to tell Sookie about his business situation, but promises to come back the next night.

Sookie is afraid Bill won’t live that long, so she heads to Fangtasia. Eric is afraid Sookie will be killed if Mr. Gus finds out about their actual relationship, so he lies and says she’s just a fangbanger. He pretends to glamour her to make her leave; while Sookie is there, she hears Mr. Gus thinking he doesn’t trust Eric and Pam and there’s something in the basement.

Sookie breaks into the basement, finds Sarah, who is as nutty and self-centered as ever. Sookie is disinclined to rescue Sarah, but realizes Sarah must be the cure. Sookie returns with Bill and Bill’s progeny Jessica (Deborah Ann Woll) in tow at the same time Eric and Pam go down to the basement (Eric was planning to bring Sarah’s blood to Bill). Bill sees Eric is cured – and announces he won’t drink.

We can only hope that the next episode begins with Pam slapping Bill silly, since Sookie and Jess probably won’t and Eric wouldn’t want to risk getting Bill’s blood on him. All of this grief, danger, effort and Bill is now refusing the cure? Shame on him for putting everyone else through yet more misery on his behalf. It is, of course, in character, so this isn’t as though the writers are coming up with something out of thin air. It just confirms that Bill is, in certain respects, a jackass.

There is a very good scene where Sookie asks Bill why Sophie-Anne wanted him to seek Sookie out in the first place – turns out the late vampire queen wanted to institute a faerie breeding program – and why Bill didn’t bring Sookie to the vamp royal. Well, we all know that one, but evidently Sookie has to hear it and Bill has to say it, though now he feels all he had to offer her was darkness. Sookie says that wasn’t at all how it felt, but Bill is going into Bill guilt-land again. Stop it, dude.

Before the get-together in the Fangtasia basement, Jessica has been having a horrible time of her own. When she goes to try to rescue Adilyn (Bailey Noble) and Wade (Noah Matthews) from the vengeful Violet (Karolina Wydra), Jess is taken prisoner herself. Violet sends email photos to Jason (Ryan Kwanten), who heads to Violet’s house. Because Hoyt (Jim Parrack), who still doesn’t remember knowing Jason or Jessica, and his current girlfriend Bridget (Ashley Hinshaw) are having an argument over kids – she wants them, he doesn’t – Bridget jumps into Jason’s sheriff’s car and refuses to leave.

Jason leaves Bridget in the car and enters Violet’s mansion. Violet soon has him chained up as well, and enumerates the tortures she’s going to inflict on him, Jess, Adilyn and Wade. And then, bless him, Hoyt enters and shoots Violet through the back, killing her. He followed Jason. Hoyt is once again smitten with Jess, who is stunned to see him, especially in this circumstance. Andy (Chris Bauer) and Holly (Lauren Bowles) show up for a teary, happy family reunion. Later, Jess and Jason have a talk where they define their relationship as “a beautiful friendship” (Jessica’s words) and Hoyt can’t stop thinking about the gorgeous redhead.

Wydra has been a grand and funny and fierce villain, reveling in her role and since we’re this close to the end of the series, she creates some actual suspense until Violet starts monologuing. We might lose Jason or Jessica, but not this way. It is great symmetry that Hoyt, albeit he’ll probably never know it, gets to kill the woman who took his mother’s life. There’s great sweetness in Parrack’s playing of Hoyt once again entranced by Jessica, and some lovely touches in the writing, with Hoyt showing up to give Jessica the gift of his Hep-V-negative blood for Bill once he learns that Jess’ maker is ill.

As for the Bellefleur/Cleary part of the story, Bauer is so affecting in his paternal concern that we want everything to work out just for his sake. The big parent/child coming together is touching without being mushy.

Lettie Mae (Adina Porter) and Lafayette (Nelsan Ellis) are still digging up that front yard. The Reverend (Gregg Daniel) shows up to take Lettie Mae away, but he winds up persuaded to drink vampire James’ (Nathan Parsons) blood so that he can share Lettie Mae and Lafayette’s vision. What Tara (Rutina Wesley) wants to show them is that, as a child, she buried a gun rather than shooting her abusive father (Malcolm Goodman) with it. The father simply left the household after beating up Lettie Mae one last time. Tara feels guilty she didn’t protect her mother; Lettie Mae feels guilty she didn’t protect Tara. The two forgive one another and Tara dissolves into white mist.

While it’s good that Tara and Lettie Mae have a final reconciliation and that Wesley gets a farewell sequence, the gun seems a bit thin as a means of bringing the two characters together one last time. Lettie Mae having been abused and abandoned hardly excuses her serious maternal failings and poor judgment over the years. Tara hanging around in limbo so that she can show Lettie Mae she had the opportunity to shoot her father but didn’t do it doesn’t really make sense; we can believe that the living/undead Tara wouldn’t see it, but it seems like afterlife Tara should realize that shooting her father would not only not have made things better, it likely would have landed Lettie Mae in prison.

“Almost Home” is an eventful episode that keeps us wondering what’s going to happen next. This far into the story, that’s a true achievement.