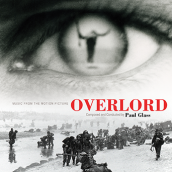 While reveling in such mainstream classics and well-known composers as Alfred Newman’s HOW GREEN WAS MY VALLEY and Dmitri Tiomkin’s IT’S A WONDERFUL LIFE, Kritzerland has also shown a penchant for such artier composers as Toru Takemitsu (RISING SUN) and Dana Kaproff  (WHEN A STRANGER CALLS). But of all the unknown gems they’ve put out so far, perhaps none is better timed, or shines amore beautifully than Paul Glass’ OVERLORD, an alternately modernistic and classical score composed for Stuart Cooper’s truly revolutionary war movie about the D-Day invasion, an amazing film which has also now received a blu ray debut from the cinematheque Criterion label to mark the invasion’s 70th anniversary. Made under the auspices of The Imperial War Museum, Cooper had the groundbreaking idea of seamlessly integrating a “new” black and white film with WW2 archival footage with the heart-rending story of an ordinary bloke in the attack’s first wave. It was an approach that needed an equally unique musical voice, one that Cooper found in American composer Paul Glass.

Probably best remembered among hardcore scorephiles for the thrillers LADY IN A CAGE and BUNNY LAKE IS MISSING, Glass’ OVERLORD stands as one of the best 70s scores you’ve never heard of until now. Combining Avant garde dissonant strings with lyricism worthy of such great bucolic Brit composers as Edward Elgar and William Walton, Glass conveys the sad sense of a soldier’s future that could have been. The music of OVERLORD‘s everyman protagonist is fearfully contrasted with music for footage the troops build up and immense war machines, giving a sense of hopelessness and sacrifice to a still-necessary endeavor, as well as immensity that goes beyond its character’s understanding. OVERLORD is at once poetically soothing and harshly demanding, its lush orchestral approach also given nostalgic 40s tunes to complement a country at its most valorous, and vulnerable – an aching tenderness that makes the movie’s shock ending all the more impactful. Though the human toll of D-Day remains unimaginable, Glass’ excellent score makes us feel for the sad destiny of an individual among thousands, a score frozen in time with an eye’s last vision.

If one might think that Glass’ style might be stuck in the 40s, a second disc offers Glass’ woozy film noir score for Stuart Cooper’s HUSTLE. You can positively feel the sexual heat and cigarette smoke brimming from Glass’ atmospheric work that hits the notes you’d want from the genre. Yet like OVERLORD, Glass shows a talent for impressionistic music, here with impressionistic strings and percussion to dance with the sweating brass and Hammond organ. It’s the kind of nervy orchestrations that make HUSTLE dangerously abstract and memorable while delivering the grifter goods. Also featured on this Cooper-centric album is Robert Farnon’s score for the director’s THE DISAPPEARANCE. Best known for hiply scoring the cult Brit show THE PRISONER Farnon’s work for this murderously re-cut Donald Sutherland assassin mystery (now on Twilight Time DVD) receives an interesting, impressionistic score that notably incorporates Ravel’s “Piano Concerto in G Major” to show just how well a solo, classical keyboard can signal murderous intent when accompanied by piercing strings and ominous percussion.

Click on the link to Purchase the OVERLORD soundtrack