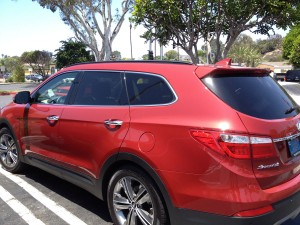 It is fitting that on a trip to San Diego Comic-Con 2014 for a whole slew of SHARKNADO 2: THE SECOND ONE events (which I directed), I was able to test drive a deep red colored 2014 Hyundai Santa Fe Limited on my journey  there with my family.

This was the first time I had a chance to drive a Hyundai and I have to say, the Santa Fe Limited certainly impressed. The space was impressive, capable of fitting six people comfortably in the car.

In fact, what I loved about this mid-size vehicle was its ability to give each passenger the feeling that they’re sitting in the passenger seat up front. It’s hard to create a car that makes everyone feel special, but the Santa Fe does that.

Driving from Los Angeles to San Diego for Comic-Con is not an easy trip and there’s strategy involved if you want to avoid an additional hour of bumber-to-bumper traffic. I’ve learned driving there on Wednesday night usually is pain free – a less than three hour jaunt and definitely tolerable. 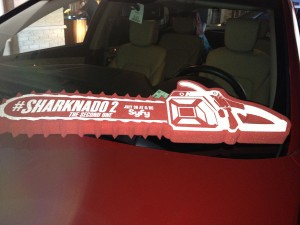 Since I had to be down earlier, my wife, daughter and I left for San Diego in the early afternoon on Wednesday. I knew it wouldn’t be an easy drive. Driving to San Diego is always hit and miss anyway, but this would not be easy and about halfway there, the traffic began.

Now the perk of having such a comfortable car like the Santa Fe, is that driving it is actually pleasurable and not a chore. There’s room, comfortable seats and Sirius radio that you can crank up full blast and discover whatever type of music strikes your fancy. If you’re going to be stuck in traffic, it should be with style.

Space-wise, I love the different permutations the Santa Fe offers. If I needed to bring a ton of stuff, it would have been easy to push the back seats down and, get the extra spacious room and still have three other passengers riding with comfort. 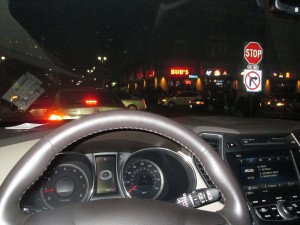 Cruise control proved to be easy until it couldn’t be used again until traffic started, and the strength of having a car as large as the Santa Fe, is that other cars are less likely to tailgate you.

Even though it took four hours plus to finally arrive in San Diego, it didn’t feel torturous, as it has in the past. The Santa Fe made it a pleasurable experience.

With three days planned in San Diego, the Santa Fe enjoyed a driving reprieve, the SHARKNADO events kicked in (from press, a panel, a Syfy party and an autographed signing session). I found people dressed as Sharknadoes, and the Syfy press team roamed the streets of San Diego giving away foam chainsaws and other promo items.

All the SHARKNADO merchandise was loaded into the vehicle and after the long weekend, it was back to Los Angeles. Unlike the drive down there, driving back we left much earlier – the morning of — to avoid traffic. This proved to be beneficial as there was little traffic and it was a more manageable and a faster trip.

Again, the Santa Fe proved to be a great vehicle to drive and another perk was the fact that one of the classic rock stations was having a Tom Petty station as a promotion for his new album HYPNOTIC EYE which was coming out in a few days. Being a big Petty fan, this was a great treat, especially since sprinkled throughout the various Tom Petty cuts were songs from that new album HYPNOTIC EYE that hadn’t been formerly released.

Upon returning, there were a couple more days with the Santa Fe driving it around city streets and the city and even in this atmosphere it was a joy to drive. I was sad to see the Santa Fe go.

Additionally, the gas mileage was incredible. We gassed up once during the entire way coming back and forth from San Diego – a pretty great accomplishment. 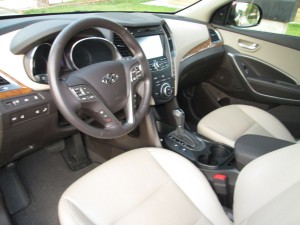 For a midsize car, the Santa Fe packs a whopping punch. Comfort is such a big part of the driving experience and when you actually own the vehicle, you want to know that it serves its purpose both on long and short trips. Santa Fe is a sturdy vehicle that I would be happy to fight an actual SHARKNADO with.