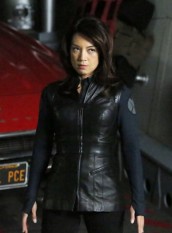 Another good episode where trust is hard to come by 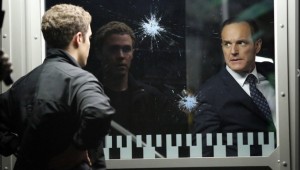 It seems that MARVEL’S AGENTS OF SHIELD debuted at the wrong time.

Had the series debuted in the mid-season and actually well-timed with what happened in CAPTAIN AMERICA: THE WINTER SOLDIER then maybe it wouldn’t have lost the vast number of viewers it has over the course of the season.

You see, the last three episodes of AOS have been the best all year. While it could be better, it is finally delivering on some of the promise that we had hoped for this series. Actual villains. Actual superheroes. Actual interesting plots that are more than just lousy recovering a lost piece of technology or investigating some kidnapping. Instead we had to sit through terrible episodes of this show that caused many viewers to abandon ship and a half-hearted tie-in to THOR: THE DARK WORLD.

Obviously the show is hindered by the fact that S.H.I.E.L.D. plays a primary role in THE WINTER SOLDIER and the events there have serious ramifications for a show that is centered on the agency. But had they debuted this in the mid-season, they could have avoided much of the bad sh** and gone right to the goodies. But it is what it is and we now must deal with Marvel and ABC trying to salvage the show.

With “Turn, Turn, Turn” it was all about rooting out the Clairvoyant and bringing an end to his meddling – one of the few continuing plotlines during the lousy 14 episodes prior to the three good ones. But as the title suggests, there were a slew of turns in a number of characters in a way that would even make shows like 24 proud.

The episode does a very good job of keeping you guessing as to who the real bad guys are. At first, the team tracks Deathlok aka Mike Peterson (J. August Richards) to a dude that appears to be the Clairvoyant where Ward (Brett Dalton) seemingly kills in cold blood because he has a hankering for Skye (Chloe Bennet) and wants to protect her … or so it seems.

Meanwhile, Fitz (Iain De Caestecker) discovers that Agent May (Ming-Na Wen) has a secret line to someone and has been sending reports to someone on the status of the team. Agent Coulson (Clark Gregg) questions her about it and she says it is Agent Fury who she has been reporting to. He doesn’t buy it but things get more pressing when Agent Victoria Hand (Saffron Burrows) turns the plane around and attacks the team.

Soon we learn that Hydra has come out of the shadows and is attacking S.H.I.E.L.D. on all levels (following THE WINTER SOLDIER). Hand appears to be one of the good guys but there are moles everywhere inside S.H.I.E.L.D. and soon discover that John Garrett (Bill Paxton) is one of them. Actually, he’s the head mole, the Claivoyant – not with mental powers but with the clearance to know everything going on inside the organization because of that clearance.

After a quick battle they take him captive and he is lead away by Hand and Ward to be taken to the S.H.I.E.L.D. jail. But along the way, Ward turns and reveals to be a member of Hydra as well, killing Hand and a number of other agents.

Now, hopefully this isn’t a ruse. They aren’t just playing Ward to be under mind control or working for someone else or whatever, cause then this really big turn would be completely wasted. Garrett’s change is a big one as well but it makes sense given he was there when they found that alien and the drug that saved Coulson and Skye. However, Ward was a bit of a shock and a good one. Hopefully he can become some big bad guy and we can really have something with this change of direction. But if they do it just for shock value and he turns out to be a good guy that will just really ruin it.