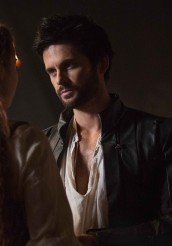 The actor talks the Starz series, plus what he learned on Broadway 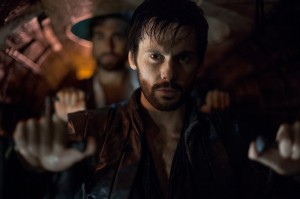 In Part Two of Assignment X’s exclusive interview with DA VINCI’S DEMONS star Tom Riley, he talks more about portraying Leonardo da Vinci in the second season of the Starz series, as well as how working on Broadway emboldened him as an actor – and what he thinks of SHARKNADO.

AX: You were on Broadway in Tom Stoppard’s play ARCADIA. Did that help you in any way anchor into the American entertainment industry?

TOM RILEY: Well, it’s a very British play, and Tom Stoppard, and it was directed by a Brit [David Leveaux]. Broadway’s a different beast [to television]. I absolutely loved it. It was some of the best six months out of my life. And the play is about genius. It helped me understand genius a bit more, what it was, and being sat with Tom Stoppard, who has obviously one of the fastest minds living, and being able to interact with him was a great way in.

As far as the American industry is concerned, I’ve kind of noticed the difference between how actors approach things. At the read-through – Brits have a style, where they just dip their toes in, “I might do it like this, or …” and then it grows and you work it out over rehearsal and you’ve got it on stage. The Americans knew what they were going to do. They came in with huge choices for the read-through. And you think, “Wow. That’s bold and brave.” And they were prepared to be [flexible] – if someone said, “That doesn’t work,” they went, “Oh, okay,” and started again. But that made me realize that sometimes – auditions here, for example, you just have to go into the room and give it to them, and if it doesn’t work, then it doesn’t work, and if it does, it does, but nothing’s worth just being like, “Is this okay?” [laughs] It doesn’t actually fly.

AX: Did you take that approach going into DA VINCI’S DEMONS?

RILEY: I had to, because it’s so many bold choices, and it’s such a bold script, and he leapt from one moment to the next. I had to just commit to choices, as crazy as some of them seemed, and then see how they mutated as the series progressed.

AX: Is there anything that you have to do to get yourself into the Renaissance mindset, or do you just play Leonardo as a contemporary person?

RILEY: [DA VINCI’S DEMONS creator/executive producer] David [S. Goyer] was always very keen that he should seem contemporary, that he should seem to be out of time, that he was from the future – not actually from the future, but he felt like if you dropped him in the twenty-first century [he’d fit]. Everyone else was going, “Who’s this guy?” He’s not constrained by period, he’s not constrained by the stiffness of period drama, he’s got a very contemporary delivery. I was back and forth about whether how much that worked in the first season, and I certainly in the second tried to make it more cohesive as a whole and move in a direction towards a more period style and likewise, for the more period characters to come the other way and just try to make the show more tonally consistent.

AX: What’s surprised you most about DA VINCI’S DEMONS so far?

RILEY: Well, I remember when we watched that first episode, we were surprised at how fun it was. We went, “Oh! It’s more entertaining than we expected, than any of us expected it to be.” It’s more of an adventure show. Because you do so many of these quite deep, difficult scenes, then you flip to the other thing – “Oh, it’s a romp.” And as it progresses season to season, it’s less so. It all gets a bit darker and the whole thing becomes more serialized. But certainly about the first season, I remember watching it and thinking, “Oh, okay, well, good. It’s that sort of show.”

AX: Has there been anything that, when you saw it in the final cut, you went, “I really wasn’t expecting it to look like that”?

RILEY: Yeah, I’m intensely critical of myself, among other things, all the time. And so there are always moments when you think, “Oh, okay, I would have preferred it another way.” In second season especially, I think the effects are astonishing. In Peru, I didn’t expect it to look quite as lush and beautiful and green, and you think, “Hold on, that’sWales? How did we pull that off?” So I think that every time I see it. And the music sessions, watching the music score, I sit in the ADR suite. I just watch the show and think, “Wow.”

AX: Do you learn from watching yourself, or do you feel, “Oh, I can’t watch myself”?

RILEY: Both. I can’t watch myself, and then I try and work out why. I go, “That’s not working. Why is that bugging me so much? Okay, maybe …” It’s all so technical.

AX: What have you learned from watching yourself in Season 1?

RILEY: There was more character stuff, really. It’s like, “Okay, well, there are the different versions of him, and this is who he is and what he is, and how can we make these things coalesce? How can that all come together into something, and how can that change? How can he mature, how can he grow, how can he be knocked off his pedestal?”

AX: You’re a producer on Season 2 of DA VINCI’S DEMONS. What does that entail for you?

RILEY: I’ve just kind of stuck within my wheelhouse, which is character, which is what I understand from an acting perspective, so I’ve tried to make sure that all the acting, all the moments, the small moments between characters, are protected – stuff that can get lost in the edit, when the bigger, more VFX things start coming in, you kind of lose just the human moments. So I’ve tried to be the safeguard of those.

AX: So you’re more in the editing suite and the writers’ room?

AX: Can you point to any of those “smaller moments” specifically?

RILEY: No, I wouldn’t dare. There are a few that I’m proud of that have made it into the show, that changed the shape of the show that were as a result of saying things, but then we’ve all been able to do that, so I’m sure it’s been a minor aid to the show, but at least it’s been interesting to see if you can make the smallest difference.

AX: You and the other DA VINCI’S DEMONS people have to talk to a lot of journalists in the course of promoting the series. Does having to talk about the work so much affect the work in any way?

RILEY: Sometimes it enlightens it. Sometimes you talk and you think, “Oh, yeah, that’s what this is. That’s interesting for the next season.” Certainly in between 1 and 2, I remember thinking, “That’s a great connection.” You talk about it so much that you find yourself examining characters in ways that you didn’t have time to do when you were shooting. As far as the actual circus of it all, it’s the only time that actors live the life other people think actors live. So it’s the only time you’re put up in nice hotels and flown business class and all that stuff, because they’re not paying you, so they have to be nice to you. Everything else, when you’re working, you stay in a tiny trailer off a motorway somewhere in the rain. It’s completely unglamorous.

AX: Do you enjoy American pop culture – for instance, SHARKNADO?

RILEY: SHARKNADO was one of the seminal moments of 2013 for me.

RILEY: I did. Of course! What a treat!

RILEY: Oh, a Sharknado. That would be extraordinary.

RILEY: I start a movie the minute I get off a plane from here, called KILL YOUR FRIENDS, which is Nick Hoult and a brilliant young director called Owen Harris. It’s a British indie about the British music industry in the Nineties and it’s based on a fantastic book by a guy called John Niven, a real cult hit. It’s a great script, it really is. I can’t wait to get started on it. In the film, I’m an A&R man.

AX: Is there anything else you want people to know about DA VINCI’S DEMONS right now?

RILEY: I think people should know that if they dismissed it early on, they should come back, because the show pays back your investment. By the middle of the first season, we took off, and I think the second season’s even better.