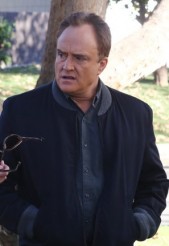 The actor also talks SAVING MR. BANKS and CABIN IN THE WOODS 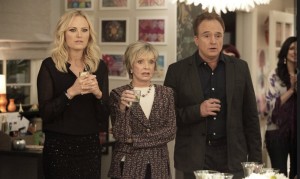 Whitford is a film and TV veteran, whose credits include starring roles in THE WEST WING, STUDIO 60 ON THE SUNSET STRIP and THE GOOD GUYS. At a party that ABC throws for the Television Critics Association, he takes some time to talk about TROPHY WIFE and some other recent gigs.

AX: Does Pete actually think of himself as the husband of a trophy wife?

BRADLEY WHITFORD: No. I mean, I think the irony of the set-up of the show is, he actually is with the right person. That she is a spectacularly gorgeous young Swede makes everybody else think it’s cynical, but it’s not. And if you watch it, it’s not.

WHITFORD: Yeah. There are obviously some pendulum swings going on there.

AX: How is it playing the parent of all of those kids?

WHITFORD: It’s really fun. They are delightful, non-cynical, non-showbiz-y kids, all of them. It’s really fun to go to work with them. How about Albert [Tsai]? He’s very talented and he’s just a very honest, interesting, bright kid. He knows everybody’s lines, everybody’s call time. He came up to me, he said, “Bradley, can I ask you a question?” I said, “Sure.” He said, “You’re playing a lawyer. What do you know about the Constitution?” And I said, “Well, what do you know about the Constitution?” He said, “Well, I know there are ten amendments.” I said, “Actually, Albert there are more than ten.” He said, “Oh, I was speaking of the original amendments, the Bill of Rights.” He’s a really sharp kid. He’s explaining to some guys on the crew what the Dow Industrial Average is. I mean, he’s a really bright kid.

AX: Why did he want to know what you knew about the Constitution?

WHITFORD: Well, he was just curious – he’s a curious kid.

AX: Can you talk about the differences in how you play opposite Marcia Gay Harden and Michaela Watkins as Pete’s exes?

WHITFORD: It sounds like a cliché that a guy on a TV show would say, but Marcia is just a spectacular actress and a joy to work with, and Michaela just cracks me up to no end, so it’s a lot of fun.

[Timothy Busfield, who is on ABC’s MIND GAMES, comes over to say hello to Whitford.]

WHITFORD: I met Tim on REVENGE OF THE NERDS 2: NERDS IN PARADISE.

AX: Were you a nerd?

WHITFORD: No, I was a jerk.

AX: In last year’s movie SAVING MR. BANKS, which was about the making of MARY POPPINS, you played real-life screenwriter Don DaGradi. Did you do research for that?

WHITFORD: Yeah. There was a lot. We had all the tapes of what exactly transpired [in the writers’ room with DaGradi, MARY POPPINS book author P.L. Travers, played by Emma Thompson, and songwriting sibling team Richard and Robert Sherman, played respectively by Jason Schwartzman and B.J. Novak], which was a fascinating thing to have. We had the wonderful Richard Sherman there every day, who could tell us exactly what was going on in the room. We read a lot of books about Walt Disney. It was a really great experience.

AX: Was Don DaGradi really as downtrodden as he seems to be in the film?

WHITFORD: Oh, yeah. If you listen to those tapes, this woman [Travers] was an ego-killing machine. These guys knew that they had the first line of their obituary in their hands and she came in and she hated America, hated animation, hated Walt Disney, hated musicals – I mean, it was awful, really tough.

AX: And years after the fact, but now it can be asked – any reminiscences of CABIN IN THE WOODS?

WHITFORD: Yes. That was a lot of fun. Working with Richard Jenkins, knowing that he was signed onto that movie – Joss [Whedon, who produced the film and co-wrote the screenplay with director Drew Goddard] is an old friend and an amazing creative force, and Joss’ imagination going crazy.

AX: Anything else you’d like to say about TROPHY WIFE right now?