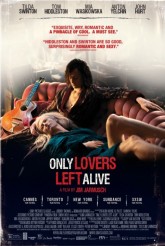 The charisma of Tilda Swinton and Tom Hiddleston vs. a very light vampire plot 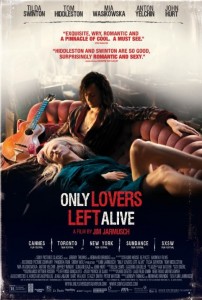 The notion of watching Tilda Swinton and Tom Hiddleston play characters who are besotted with one another will be enough to get quite a few people into the movie theatre, and those who come for that reason won’t be disappointed by the actors. However, ONLY LOVERS LEFT ALIVE is not only a love story but also a vampire film. Its narrative style suggests that writer/director Jim Jarmusch hasn’t turned on his TV in the last decade to catch TRUE BLOOD, THE VAMPIRE DIARIES, BEING HUMAN, et al, and even indie feature fare like THE HAMILTONS, and therefore doesn’t get that vampires trying to get by in the human world may not be an entirely novel topic.

Adam (Hiddleston) is a depressed musician holed up in Detroit, where he distributes his music via eager promoter Ian (Anton Yelchin), who has no idea that his hero’s eccentricities are blood-based. Eve (Swinton), Adam’s wife, is happily living in Tangier, but when it’s clear that he’s in a funk, she comes running – as fast as she can via connecting night flights.

We learn that the couple, while not the original Adam and Eve, has been married for centuries. What we don’t learn – and the question is even raised by another character – is why they ever separate, given that they are legitimately crazy about one another.

The world of ONLY LOVERS LEFT ALIVE may be our present, or it may be the near future. It’s hard to tell if humanity is actually succumbing to some sort of disease, or if it’s just Adam’s gloomy view – he calls regular humans “zombies” – that makes it seem like civilization is in decline. The airlines are still working, hospitals still see patients and have nice, quiet hallways and police still patrol the streets, so the trappings of contemporary order all still seem to be in place.

What happens when Eve gets toDetroitis the sort of thing that happens on some of the aforementioned TV shows, minus either party freaking out at the other. Something that is built up into a climactic crisis is handled in a way that makes us unsure if we’re meant to find a message here, or if this is just a playful sort of subversion of expectations. It’s hard to know if we’re watching the culmination of an existential crisis, or just a joke on our own powers of observation.

The main attraction here is not the film’s take on vampirism but rather the delightful performances. Swinton as the sweet, optimistic Eve is the perfect combination of wisdom and wonder, ever able to bring out the best in Adam. Hiddleston puts together wit, a kind of adolescent sulkiness and sweeping romantic gallantry. John Hurt provides fabulous support, while Yelchin, Mia Wasikowska as Eve’s trouble-making younger sister and Jeffrey Wright as a doctor all help liven things up.

However, there’s only so much even the most charming performances can do with a storyline this ephemeral. Events meander here. If this meant that time was being spent providing us with more detailed, nuanced explorations of the characters, it would be fine. Sometimes this is the case, but more often, filmmaker Jarmusch is simply bemused by the situations he sets up for his people, even though they’re not necessarily original in the annals of vampires in the human world. The results are consequently more diverting than visceral, though the company is interesting and agreeable.

There are horror elements in ONLY LOVERS LEFT ALIVE, but mostly it’s there so that we can enjoy seeing Swinton and Hiddleston et al in top form.