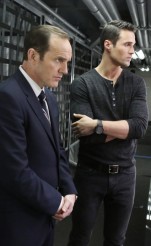 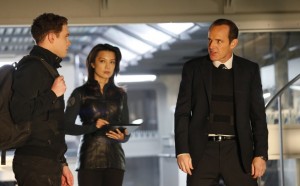 In the previous episode of MARVEL’S AGENTS OF SHIELD, Skye (Chloe Bennet) was shot twice and left for dead by an evil henchmen working for the Clairvoyant and Centipede.

In “T.A.H.I.T.I.”, the race is on to find a way to save her after the doctors inform Agent Coulson (Clark Gregg) that she won’t make it. Coulson with the knowledge that he was brought back from the dead figures if he can take her to the doctors that fixed him, maybe, they can work their magic on her – despite the whole wanting to die thing and the horrors he has gone through trying to piece together the past.

But when the doctors just up and disappear (how convenient), the S.H.I.E.L.D. team packs up Skye in a stasis tube and flies to where Coulson was operated on to find some miracle drug. Along the way, they pick up Agent John Garrett (guest star Bill Paxton) who is brought in to bring the evil henchman back to S.H.I.E.L.D. headquarters. But Coulson sweet talks him into helping them get the super drug.

They storm the facility, kill some guys that don’t seem so bad and then steal the drug off some weird half alien creature.

I really liked that they took some time to build the next episode. This is what they should start doing from now on. Give us an introduction to what we will see next week whether it involves a hero/villain or not. It is a great way to introduce subplots as well, which this series is sorely, sorely missing.

Speaking of this, the inclusion of Lorelei is a great move. This is the first time in the show’s season that an actual real villain is something that has been missing for some time. Those that are not familiar with her character you got a piece of it in this episode. She is an Asgardian with the power of seduction. This will bring along the first real hero that has been on the show in Sif (from the THOR movies), also an Asgardian presumably tracking her.  Now if they don’t muck it up too much (no guarantees there), this is the stuff I think most people were hoping for in this show. Real heroes. Real villains. Not this crap we have been shoveled from the get-go.

The strange half body of the dude that was used to make the miracle drug that cured both Skye and Coulson. Very odd stuff there and presumably not something we will see any time in the near future since the entire facility went up in smoke and fire at the end. But who was that guy? Why was he only a torso and a head? How did they know they could make a freaking super drug from him?

The inclusion of Garrett to the mix as hopefully a recurring character. Not only is Paxton a great actor but his character is actually interesting. In fact, it makes me wish his character was actually on the show all the time and not some of the lame people that are on the show regularly. I also liked his trainee as he seemed to also have some characteristics that are sorely lacking from the regular cast. Not a good thing when two guest stars are more interesting than the main people.

Skye lives. In a better series, Skye’s death would have been used to rally the team and get them motivated for revenge. Sure, there is numerous possibilities that they could have done with her character. But as bad as this show has been, killing her off would have sent a signal that at least this show is willing to take some chances. Instead, a miracle drug cures her and she’s back on the team and we are still treading water. In fact, it would be better if they would kill off everyone except Coulson, May (Ming-Na Wen), who is actually interesting, and Simmons (Elizabeth Henstridge), who is great eye candy. Everyone else is boring, expendable and completely uninteresting.

What is up with S.H.I.E.L.D. are they supposed to be the good guys here? If so, why are they building weapons (in THE AVENGERS), bringing people back to life that don’t want to be and hiding strange alien creatures to be used for super drugs? Doesn’t seem like an organization that is on the up and up. Maybe it is going somewhere. Hopefully it is going somewhere because right now, it doesn’t seem to be a lot of differences between the Centipede they keep trying to fight.