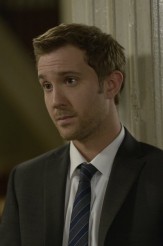 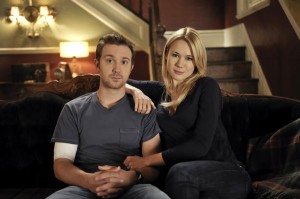 It’s been a big year for all of the characters in Season 3 of the U.S.version of BEING HUMAN, Mondays at 9 PM on Syfy (the season finale is tonight, April 8). Vampire Aidan (Sam Witwer) became immune to a vampire-killing virus and made his first new vampire in quite awhile. Sally (Meaghan Rath) was brought back to life, died again and is now once more a ghost.

As for our werewolf couple, Josh, played by Sam Huntington, and Nora, played by Kristen Hager, they’ve been through the wringer. Josh killed the werewolf who made him, hoping it would cure Nora, but only Josh turned human, leaving him odd-non-supernatural-man-out in the household. Then purebred werewolf Liam, played by guest star Xander Berkeley, turned up looking for his missing daughter Bryn, not knowing that Nora killed her. Fighting with Liam to save Aidan, Josh was scratched, meaning he’ll be a wolf again at the next full moon. Despite this and much more peril and craziness, Josh and Nora finally married in last week’s episode.

Huntingtonis a New Hampshirenative, whose credits include working alongside Gene Simmons in DETROIT ROCK CITY and playing Jimmy Olsen in SUPERMAN RETURNS; he teamed again with that film’s Brandon Routh in DYLAN DOG: DEAD OF NIGHT. Hager, from Ontario, Canada, has been a regular in a number of Canadian series and appeared in features including WANTED and ALIEN VS. PREDATOR: REQUIEM.

In real life, Huntington and Hager appear to genuinely be the best of friends, running with each other’s ideas during an interview in the midst of the Television Critics Association press tour.

ASSIGNMENT X: How did you feel about playing the de-werewolfed version of Josh?

SAM HUNTINGTON: Much to my regret, almost. I did this [killed the werewolf who turned him], but I really didn’t do it for myself. I was kind of trying to cure this one [indicates Hager], and the next thing you know, I didn’t.

KRISTEN HAGER: No, you did not cure me.

HUNTINGTON: No, I didn’t.

HUNTINGTON: I was little bummed out, I think. Josh was feeling a lot on the outside. 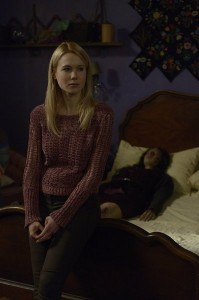 HUNTINGTON: And what was interesting was, when we were shooting it, Josh was feeling left out of the crew. He’s no longer a supernatural being, he can’t see Sally any more, that whole thing – but he can because of [Sally coming back to life, then can’t when she’s a ghost again]. But what was interesting was, as we were shooting it, I started feeling left out, too, just as an actor. It was like, “These guys are all supernatural, and I’m a human schmuck.”

HAGER: He did. His excitable rambunctious self was a bit quieter. Just a bit.

AX: When you both do the werewolf transformation scenes – these days, it’s usually just implied, but the transformations were initially shown in detail. Was that very physically painful for you, just to have to go into those contortions?

HAGER: Grueling for multiple reasons. You [Huntington] should answer the whole prosthetic aspect of it, because I haven’t had to do as many as you have.

HUNTINGTON: Yeah, the prosthetics are crazy and the makeup is insane.

HAGER: You just imagine that you’re entire body is literally physically ripping itself apart, your bones are protruding through your skin and you just have to go for it and imagine being in the worst pain of your life. And so it is exhausting, because you’re done and you’ve been screaming and, yes, contorting, and yeah, it’s physically draining.

HUNTINGTON: My body gets so tensed up, my neck the next day, and our voices –

HAGER: Both of us have a husky voice problem.

AX: Now, the relationship between your two characters has been pretty –

AX: What is the most fun aspect for you guys to play of that relationship – when one of you is upset with the other, or …?

HUNTINGTON: No. When it’s fun.

HAGER: Yeah. When it’s fun. We so rarely get to have a moment where the two characters are just having fun together and laughing that those are my favorite moments.

HUNTINGTON: Far and away. They’re just the best. It’s much fun.

HAGER: It’s so much fun.

HUNTINGTON: We show that we’re friends and it’s real.

AX: How was working with Xander Berkeley as your nemesis this season?

HAGER: We, and I, got to have a lot of scenes with him, because obviously he comes looking for answers about his children. I’m who he seeks out. And it was great. He plays a bad guy like no other, and I had a great time with him.

HUNTINGTON: And I think he really took it seriously, and that’s all you can ask for. Also, he was just a really sensitive, wonderful man.

AX: Have you seen the BBC version of BEING HUMAN at all?

HUNTINGTON: I’ve seen most of the first season.

AX: Did you see their Season 4? Do you think anything like that might happen on your show?

HAGER: I don’t think that will happen.

AX: Do either or both of you have any projects coming up that we should know about?

HAGER: I have a film, a romantic comedy, called THE RIGHT KIND OF WRONG, coming out in the fall. And fans of the genre should be interested, because it stars Ryan Kwanten, who is on TRUE BLOOD, and Sara Canning, who was the aunt on VAMPIRE DIARIES. So – familiar faces.

AX: And what would you guys most like people to know about BEING HUMAN right now?

HUNTINGTON: I’ve wanted to say that all day.