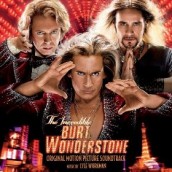 Lyle Workman pulls another energetic comedy score out of his hat

The swinging funk sound of SUPERBAD proved to be the hat trick that’s propelled Lyle Workman into the self-styled comedy score for THE INCREDIBLE BURT WONDERSTONE dealing with a Vegas populated by such other hot acts as Christophe Beck, Christopher Lennertz and Theodore Shapiro. All share a talent for combining today’s retro-pop grooves with the kind of orchestral magic appreciated by the David Copperfield generation. Like the best shows, Workman energetically swings from one style to the next with a constant sense of musical surprise. Brazen Latin rhythms do a reveal to Swingles Singers kitsch, while the screaming rock guitar of a mind rape street musician does battle with the oh-so rousing strings of our pompous magician.

Workman also shows his ability to replicate the goofball new age music that fill so many Sin City spectacles, complete with babbling ethnic vocalese, heavenly choruses and out-of-control rock stupendousness. But if there’s a reason that BURT WONDERSTONE is incredible, then it’s for the movie’s astute mix of lewd-crude comedy with heartfelt emotion and the joy of magic, a thematic earnestness that Workman nails with romantically upbeat orchestral-guitar melodies, sad sack harmonicas and gentle strings. Surprisingly cohesive and always enjoyable by the end of its entertaining soundtrack, Lyle Workman shows he’s more than got the stuff to remain a new top act in comedy scoring Caesar’s Palace with THE INCREDIBLE BURT WONDERSTONE.

Clink on the link to buy the INCREDIBLE BURT WONDERSTONE soundtrack