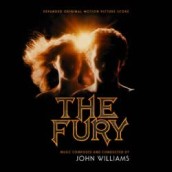 John Williams blows up with the spirit of Bernard Herrmann

Brian De Palma was lucky enough to get the real Herrmann deal to participate in his cinematically brilliant games of Hitchcock fetishism for SISTERS and OBSESSION. And just as James Stewart mooned over Kim Novak’s doppelganger, De Palma has since spent a good part of his thriller-centric career getting just about every composer since Bernard’s passing to dress up in his musical clothing, which has provided a pretty good fit for such men as Pino Donaggio (DRESSED TO KILL) and Ryuichi Sakamoto (FEMME FATALE).

Perhaps that dramatically macabre sound has never been tailored better than to John Williams, an artist who knew Herrmann, and provided the FAMILY PLOT swan song for Hitch himself. Given that pedigree, it’s almost as Herrmann himself had still been alive to score 1978s THE FURY as intended, his trademarked style given the equally distinctive, and melodically lush quality of the guy who did STAR WARS in 1977. Before the next decade in which he’d make the hysperspace jump into sci-fi and fantasy spectacles, Williams got to show his more horrific teeth with two JAWS pictures and DRACULA, but perhaps never more explosively than in helping take De Palma’s love for telekinetic destruction to the next level.

While Donaggio had done a remarkable job in conveying a girl’s broken heart along with her mental rage in his breakthrough U.S. score for De Palma’s CARRIE, it’s understandable that the filmmaker would turn to the epic abilities of Williams for this budgetary leap in the wake of that film’s success. Even with CARRIE‘s bucket of pig’s blood, THE FURY was a far more gory and nihilistic film, taking equal inspiration from the era’s pessimistic government conspiracy thrillers, as well as the possibility of makeup and special effects to make revenge-minded teenagers all the more formidable. Williams fills that canvas with the brooding, booming sound of Herrmann, not only capturing the over-the-top dark orchestral romance of the composer’s classic work, but also employing the giddily goofy electronic sound that possessed his latter exploitation years.

THE FURY  is also an exemplar of Williams’ near-supernatural thematic ability, from the central, vengeance-filled melody to his breathlessly suspenseful builds. Indeed, “Gillian’s Escape” still remains one of Williams’ best compositions as it matches De Palma’s brilliant editing and slow motion, turning the exhilarating joy of its TK teen’s flight into horrifying tragedy. It’s a sadness that makes THE FURY food for thought by using emotion as its central, suspenseful force- though the out-of-control calliope of “Death on the Carousel” and the shrieking, Cassavettes-splattering electronic shrieks of “Gillian’s Power” show that Williams had a hilariously sadistic sense of humor to match De Palma’s.

Coinciding with Twlight Time’s blu-ray release of THE FURY, La La Land Records has taken advantage of the collector label’s practice of using music-only audio tracks as a way to put out this definitive FURY edition, which had last been on a long out-of-print Varese Sarabande Club release. It’s hard to imagine anyone bettering this two-CD album, which offers beautifully remastered versions of Williams’ original tracks, as well as the re-performed and re-sequenced. album that was presented at the time of the film’s release. Add some fun pop-jazz-disco pieces that Williams wrote for secret agent Kirk Douglas gallivanting around Chicago’s E-train, and you’ve got a FURY that’s all the rage for a genre that Williams essentially left behind, as well as a wonderful valentine to pure Herrmann-Hitchcockian pastiche that puts Williams in very good company with the master of suspense’s ultimate love slave.

Clink on the link to buy the FURY soundtrack