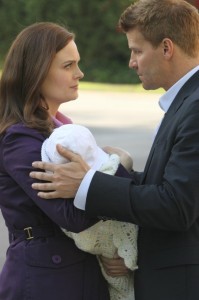 Fox has renewed BONES for an eighth season. The series, developed by Hart Hanson from the novels by Kathy Reichs, concerns the shared adventures of forensic anthropologist Temperance Brennan (Emily Deschanel) and FBI Special Agent Seeley Booth (David Boreanaz), who last season finally got together romantically and this season have a baby daughter and a home together. Tonight, the Season Seven finale airs at 8 PM.

BONES executive producer Stephen Nathan, who shares show-running duties with Hanson, talks in this exclusive interview about where the show has been and where it’s going, including some hints about what we can expect from tonight’s episode.

ASSIGNMENT X: Were you pleased and/or surprised to have BONES run this long?

STEPHEN NATHAN: Oh, my God, it’s fantastic. I’ve never done a show for this long, and I always thought it would be a nightmare, and it’s exactly the opposite. It’s been fantastic. So you’re always surprised in this business to last more than one episode, but seven years has been a real blessing.

AX: Obviously, there’s now a big ongoing arc with Brennan and Booth and the baby.

AX: The B, B and B arc. But are there going to be any more procedural arcs?

NATHAN: We do have a serial killer [who] [that changes] Booth and Brennan’s life in a pretty major way.

AX: Were there things that you wanted to do at the beginning that you wound up having enough time to do, or did the more you did it give you ideas like, “Oh, because TJ Thyne plays Hodgins this way, let’s have him do this particular thing”?

NATHAN: I think that [the latter] is the more common experience with a show. The show has a natural life of its own and it evolves on its own, so that you find out where the characters are going and what the strengths and weaknesses of the show are, so you kind of recalibrate things as you go along, and that changes all the time. And I think if you don’t, the show becomes dead.

AX: What is the division of responsibility between you and Hart Hanson?

NATHAN: Well, Hart and I have been doing BONES together for years, and this [past season], Hart was doing THE FINDER, so we kind of split duties, where I [was] doing BONES and he was doing THE FINDER and of course we talked all the time and share ideas, but launching a new show is a huge ordeal and what he was doing was superhuman. So he was off doing that and I [was] making sure BONES stays afloat. [On BONES when Hanson is there], we oft-times split episodes. I take three acts, he takes three acts, and then we swap them. We have a pretty good way of working.

NATHAN: I think we both kind of do both things and then we also have just a wonderful, wonderful staff of writers who are terrific, who will just give us wonderful stories and great murders. They’re all terrific writers, so we’re blessed.

AX: When Emily Deschanel became pregnant in real life, was that a dilemma in terms of the story arc as to whether Brennan the character should be pregnant on the show or whether you would try to hide the pregnancy from the camera?

NATHAN: Well, actually, Hart and I had been talking about that scenario on our own, even before Emily was pregnant, because we wanted to advance that relationship [between Brennan and Booth] without doing the, “They fall in love and then they’re all goo-goo with each other.” And this was just a perfect storm in a good way. And so when she announced that she was pregnant, it was just a natural thing for the show to incorporate that into the show.

AX: Was the reveal of the fact Brennan and Booth slept together when Brennan talked to Michael Conlin’s character Angela – forgive me for putting words into your mouth if this isn’t it – the show’s way of going, “It’s really not a big deal in terms of their characters, they aren’t changing, the relationship really isn’t changing …”

NATHAN: Well, obviously, they’re changing because they’re a couple and now they’re going to have a baby, but they’re the same people, and that’s what we wanted, more than anything. We wanted to keep the dynamics of the show the same. So now they just have a more intense situation to disagree about. Rather than the audience seeing the same situations played out over and over again, this is all new ground. And it takes us into a whole new area. Not only with Booth and Brennan, but with Angela and Hodgins, with Booth’s family, with her family. It’s a big change.

AX: Last season, Ryan Cartwright’s character Vincent Nigel-Murray was killed off and his death resonated through the other characters. Was he written off the show because you needed an emotional death, or was that because Cartwright was cast as a series regular on ALPHAS?

NATHAN: He went and got another job. We love Ryan and it was as sad and as painful for us to see him go as it was for the audience. We didn’t want to see him leave, [but] “Ryan’s not going to be here.” And also, there was something so sweet and emotional about him as a character, and his death seemed like it would be the most painful at the time, so it worked out well for us, although we were very, very sorry to see him go. He’s brilliant always.

AX: Has there ever been anything on BONES that’s grossed you out?

NATHAN: Yes, there was one thing that I actually said, “We can’t put it on TV. It’s just too revolting.”

AX: Did you put it on anyway?

NATHAN: No, I actually didn’t. And I’m the guy who does all the disgusting stuff. I love the revolting stuff, and it’s fun for me, and I find it amusing, but there was one thing actually in the episode [“The Crack in the Code”] – there was a shot that I said, “We’ve got to cut it out of the show, it’s just too horrible” [laughs]. It was too horrible, it just took me out of the show. Usually, we have more decomposed bodies, so we can have more fun with them, if that’s valid to say without sounding like a completely sick human being. But this was a freshly dead person – a dead body that [the production team had constructed] and the way he looked in a couple of shots was just too awful.

AX: Between Brennan and Booth’s daughter and Angela and Hodgins’ son, are you worried about all the toddler wrangling that will be going on of necessity next season?

NATHAN: No. Because I don’t have to do the wrangling! [laughs]

AX: Is that going to wreak havoc with the shooting schedule?

AX: Are you looking forward to making an eighth season?

NATHAN: Absolutely, no question about it. I’m chomping at the bit.