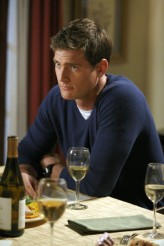 Captain Awesome is back – and a badass. Ryan McPartlin, who endeared himself to five seasons of CHUCK viewers as the title character’s brother-in-law Devon, aka Captain Awesome, has a new gig. However, neither the role itself nor the venue for the show is typical.

DAYBREAK, produced by Tim Kring of HEROES and TOUCH and directed by 24 veteran Jon Cassar, looks exactly like a pilot episode of an action mystery TV series, but instead of airing on network or cable television, it is running – one ten-minute episode every Thursday night at Daybreak2012.com. The Web series is sponsored by AT&T, which is also introducing a line of DAYBREAK-related apps.

In DAYBREAK, McPartlin sheds his awesomely warm CHUCK series persona to play Eric, an extremely tough cop who suspects Ryan Eggold’s protagonist Ben of murdering a journalist. At the premiere party for DAYBREAK on the roof of the Sunset Tower, McPartlin talks about his new gig, what else he’s been doing, and of course, the end of CHUCK.

ASSIGNMENT X: Had you and Tim Kring run into each other through NBC when HEROES and CHUCK were both on the air?

RYAN McPARTLIN: We definitely knew of each other, and I’d see him at Comic-Con, but we never really got to interact that much, but once this came to fruition, we definitely said, “Hey, let’s bring the CHUCK fans and the HEROES fans together and get them on-board for DAYBREAK2012.COM.” 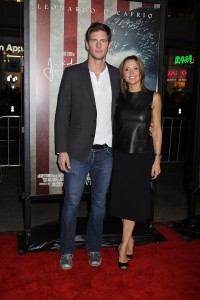 AX: Had Jon Cassar ever directed you on CHUCK?

McPARTLIN: No, Jon was busy with 24 for most of our time on CHUCK. But when I heard him and Tim Kring were on board for this – it’s like Tim Kring is a brand in himself. You mix the Tim Kring brand with the AT&T brand and you’ve got a winner.

AX: Do you have fun playing with the DAYBREAK apps? If you weren’t in this, is this something that would appeal to you?

AX: Are you still hearing from the CHUCK fans?

McPARTLIN: I am. I actually got on Twitter because I was losing touch with the CHUCK fans, so it was so nice to have them embrace me. I’ve got a bunch of followers that are hopefully coming over to DAYBREAK and spreading the word.

AX: Were you happy with the way CHUCK ended as a series?

McPARTLIN: I was very happy. People talked about, “What do you think happened? Did [Sarah, Chuck’s amnesiac wife] remember or not remember [her marriage to Chuck]?” I’m like, “You know what? She fell in love all over again,” and that’s all that mattered to me.

AX: This is a very fannish question, but did you think, “Oh, but Sarah’s not going to remember her brother-in-law Awesome”?

McPARTLIN: I’m playing a badass – daybreak2012.com – spread the word. I heard that the servers [for DAYBREAK] already crashed tonight [after it was advertised].at the end of TOUCH, the East Coast, everybody tried to log on to the website at once.

AX: Have you played a badass before?

McPARTLIN: I did. At the end of the run on CHUCK, I went over to CSI: MIAMI and I played a villainous character. I’m not going to say I’m the villain in this, because I’m not – I’m just a hardass and I’m a cop and having fun with it, so it’s just a departure from Captain Awesome.

AX: What did you do on CSI: MIAMI?

McPARTLIN: Malcolm McDowell was the villain who corrupted and manipulated my character in the CSI: MIAMI lab, and I took the whole team down. To be honest, the whole series ended in the last episode [laughs]. But they did kill me before the series came to an end.

AX: They were really mad at you ending the show.

McPARTLIN: Yeah. So I killed off the show, is what we’re basically saying [laughs]

AX: So you were on what turned out to be the series finale for a show that ran ten seasons, but they didn’t know for certain at that time they were going to be canceled. Did it seem to you like the CSI: MIAMI people had a feeling the show was coming to an end?

McPARTLIN: They had a little bit of a feeling. It was ten years, it was a long run, everybody was up for a new contract, it was an expensive show [to make], but at the end of the day, they enjoyed what they were doing and they felt they still had more stories to tell, so I don’t think they were happy. But yeah, they knew it could have come to an end.

McPARTLIN: Well, on CHUCK they never let me touch a gun, they never let me do the stunts. [The stunts on DAYBREAK] are actually right up there with those stunts. This is more of a dramatic-driven show. With CHUCK, even on the stunts, there had to be an element of comedy, so they’re both equally impressive, but this is all about death knocking at your door.

McPARTLIN: For Safeco Insurance, I’ve been doing an endorsement for them, called LivelifeLocal.com. We’re utilizing the Web to bring viewers to their website and make it a user-generated website for local activities in your area. So they’re sending me out to [participate in] some of those local activities, like white-water rafting and extreme tennis and stuff like that, just for people to get excited and get on board. They’re videotaping me [doing these activities for the website]. They’re putting me through the rigors or learning extreme tennis and white-water rafting and whatever else people are posting on the website. One of our fans won a trip with me, so he’s going to come and join me in one of these extreme adventures. That’s the whole idea of Live Life Local – they just want people to get involved in their community.

AX: Is it just synchronicity that you wound up getting a part in a scripted Web series at the same time you’re doing this unscripted series, or did AT&T know that you were doing the LiveLifeLocal.com show?

McPARTLIN: No, it was a little bit ironic there. The two big things I’ve been doing this summer happen to be Web-involved. Everybody’s been saying the Web is the future, the Web is the future, but nobody’s really figured it out yet, and I think AT&T is really on the cutting edge of putting a lot of money into the content. And at the end of the day, if we tell a good story [with DAYBREAK], people are going to tune in.

AX: Was making DAYBREAK pretty much like making a TV pilot?

McPARTLIN: It was exactly like making a TV pilot. It was as impressive and as high production, and everybody who was involved, the pedigree was unbelievable.

AX: Anything else you’d like to say about DAYBREAK?

McPARTLIN: I just hope people enjoy it and they can leave their feedback and check it out and let me know on Twitter @RyanMcPartlin what you think of the show.