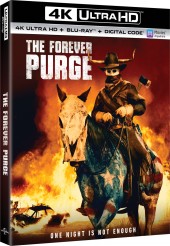 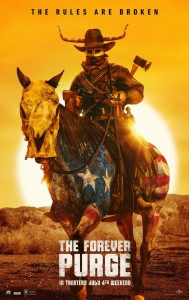 THE FOREVER PURGE is the fifth film in the PURGE franchise, which launched in 2013 (there has also been a two-season cable TV series). The movies are unapologetically political (on the progressive side) and ultra-violent, set in a dystopian alternate reality.

According to the original PURGE, the national holiday was instituted in the U.S. in 2003 by the New Founding Fathers of America (aka the NFFA). In the first film, set in 2022, the NFFA government touts its successes: unemployment is down to one percent and the economy is thriving. The government credits this to the once-yearly “purge,” during which all crime – including rape and murder – is legal for twelve hours, from sundown to sunrise. In theory, at least, this lets everyone get their aggression out so they can abide the law the rest of the time.

In practice, this results in ordinary citizens taking heavily-fortified shelter for the night, while the poor (often but not always people of color) run who can’t afford security systems or sometimes any habitation at all run from (often but not always) wealthy and heavily-armed Purgers.

Unlike the previous PURGE movies, set mainly at night in big cities and/or the suburbs, THE FOREVER PURGE is set in the largely sunlit environs of Texas, going from a grassy ranch and a small town to El Paso and the great outdoors.

We meet married couple Adela (Ana de la Reguera) and Juan (Tenoch Huerta) as they make their way covertly from Mexico to the U.S. Six months later, Adela is working as a supervisor at a meat-packing plant. Juan has a job with ranch owner Caleb Tucker (Will Patton).

Caleb’s grown son Dylan (Josh Lucas) doesn’t take kindly to the fact that Juan is better with horses than he is – and that Caleb is well aware of this. Dylan’s pregnant wife Cassidy (Cassidy Freeman) tolerates her husband’s intolerance, while Dylan’s sister Harper wishes he’d calm down. Juan’s friend, fellow immigrant and coworker T.T. (Alejandro Edda) is bemused by the whole dynamic. 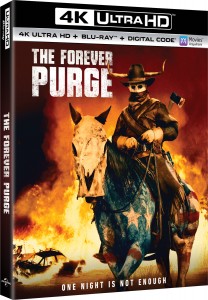 One thing everyone in the group can agree on is their dislike of the Purge. Caleb and his clan hunker down for the night behind a top-of-the-line security system. Caleb gives his employees “Purge bonuses,” which allow them to pay their way into safe haven for the duration.

The Purge is as apocalyptic as usual, but our main characters come through unscathed. Except in the morning, as corpses are collected and blood is washed off the sidewalks, traps and shootings and other mayhem continues. The Purgers have rallied round an ideology, and they’re no longer content with just one night to revel in it. The rules meant to protect people like Caleb can no longer be enforced, and people like Adela and Juan are in grave danger. Then again, even regular folks can have major survival skills.

Writer James DeMonaco, who created the PURGE franchise (scripting all five and directing the first three), isn’t shy about messaging. To paraphrase David Abramowitz, who was referring to a less-violent series, THE FOREVER PURGE is like an MSNBC segment on “Stop the Steal” conspiracy theorists with ass-kicking. Between the Purgers’ rhetoric about “taking back America,” their open racism, and dialogue about how the rich, powerful NFFA members created something they can no longer control, it doesn’t take a magic decoder to figure out what’s being discussed here.

Director Everardo Valerio Gout keeps things moving at a good clip. He doesn’t revel in the gore and weirdness and sadism in the way some other PURGE films have done, opting instead to go for a MAD MAX feel when the story allows it. This isn’t to say THE FOREVER PURGE isn’t gory and weird and sadistic, just that it’s not as extreme as it might have been.

The cast is very good, with de la Reguera a standout, and Zahn McClarnon providing staunch support as a tribal leader with a wry response to the self-proclaimed patriots.

Disc special features include a storyboard of an alternate opening scene, a deleted scene (with a good joke), a behind-the-scenes featurette, a wardrobe featurette, and the theatrical trailer.