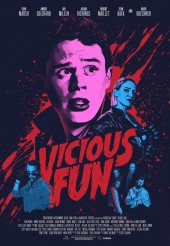 A fun riff on a variety of ‘80s horror films 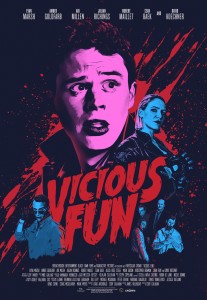 VICIOUS FUN is well-titled. It’s set in 1983 Minnesota, and is both a fairly faithful recreation of and playful tweak of the era.

Does VICIOUS FUN absolutely need to take place when people used phone booths and taxicabs a lot more often? Maybe not, but if a movie is going to pay homage to FRIDAY THE 13th, mad scientists, cannibal chefs, mild-mannered psychos and ultimate bad boyfriends, it might as well go back to a time that encompasses them all.

In the prologue, we see a murder in a car, which sets up the way VICIOUS FUN intends to play with expectations.

Joel (Evan Marsh) is introduced as a writer working for the FANGORIA-like magazine VICIOUS FANATICS. His journalistic approach – insulting a hack director he’s interviewing – won’t win him any prizes. Even so, Joel has a feel for the genre.

Joel is also what we would call today a budding incel, pining after his platonic roommate Sarah (Alexa Rose Steele). When Joel impulsively decides to follow Sarah’s date Bob (Ari Millen), he winds up getting blind drunk at a Chinese restaurant in the middle of nowhere.

Joel gets sick, passes out, comes to, and wanders into what he at first takes to be an AA meeting in the restaurant’s back room. Joel is mistaken for absent and not-yet-met new member Phil and is welcomed. Then he hears people start sharing, and realizes he’s in a support group for serial killers. Unlike AA, this gathering isn’t about conquering addiction, but rather bragging and sharing useful homicide tips.

This premise opens up a universe of possibilities. At the risk of sounding ungrateful, it’s a little disappointing that VICIOUS FUN doesn’t become even weirder than it already is. Granted, it’s pretty weird and very bloody.

Director Cody Calahan, who also came up with the story – the screenplay is by James Villeneuve – is pretty masterly when it comes to kills. He has also assembled a solid cast. Standouts are Amber Goldfarb as the group’s most unpredictable member, David Koechner as its moderator, and Millen as the multifaceted Bob.

VICIOUS FUN seems to be trying to make a point with the character of Joel, as far as how ‘80s comedies glorified behavior that now seems at best insensitive and at worst creepy. Actor Marsh expertly keeps Joel on the knife edge, embodying that type of young ‘80s protagonist, while keeping him malice-free. However, we get it so thoroughly that we wish Joel would come to his realizations quicker.

Still, Calahan and Villeneuve have a good grasp of their subject matter, and provide nostalgic horror fans with a good time while expanding some parameters.