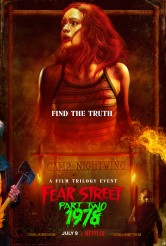 The FRIDAY THE 13th force is strong with this one 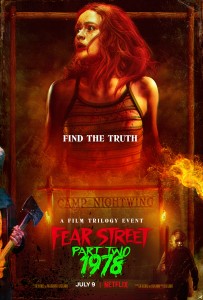 Despite the feature length of each installment, with PART TWO, FEAR STREET feels a little more like part of a miniseries than a feature film franchise. This is no doubt partly because the movies are being released a week apart, but also, since when do sequels start with actual recaps?

In PART ONE, Shadyside teen sister Deena (Kiana Madeira) and brother Josh (Benjamin Flores Jr.) learn that there’s a reason their town has regular outbreaks of serial killers: it was cursed in 1666 but the witch Sarah Fier. With Deena’s girlfriend Sam (Olivia Scott Welch) possessed by the witch, the siblings desperately seek out a survivor (played as an adult by Gillian Jacobs) of a previous massacre, which occurred in 1978 at Camp Nightwing.

Camp Nightwing is, of course, a loving tribute to Camp Crystal Lake and all those other horror sites of the late ‘70s and early ‘80s. In 1978, estranged sisters, “good girl” Cindy Berman (Emily Rudd) and rebel Ziggy (Sadie Sink), are both unhappy campers here. Peers and youthful counselors include an assortment of bullies, sex enthusiasts, misfits, and upright citizens. 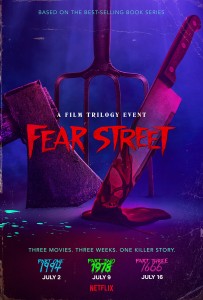 The camp’s nurse, Mary Lane (Jordana Spiro), is an understandably unhappy older woman whose daughter killed seven friends and then herself at a party years ago. Mary has some idea of what may have happened. When some bizarre, bloody events occur, Cindy and Ziggy start to piece together the clues. They may even deduce how to end the curse.

However, since FEAR STREET: PART TWO – 1978 is the middle section, and we’ve already seen that the curse is still fully active in 1994, we know that they won’t really succeed.

FEAR STREET: PART TWO has more character depth than the average ‘70s slasher. This is partly to get us more invested in the characters, and partly to round out characters we’ve met as adults in PART ONE. This gives the movie more dramatic heft, but also occasionally bogs it down a little. Screenwriters Zak Olkewicz and Leigh Janiak – as with PART ONE and PART THREE, Janiak directs here – working from a story they constructed with Phil Graziadei, based on the FEAR STREET novels by R.L. Stine – give everybody personalities, but nobody stands out as truly original creation. 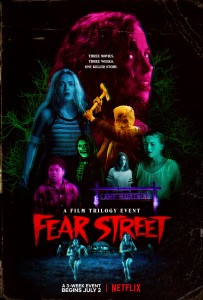 The actors, however, all give committed, distinctive performances, with Rudd and Sink delivering some touching moments as their characters navigate their shared past and conflicted present.

We also get better explanation here than in the average slasher of just how and why the maniacs can keep on coming after what ought to be death blows. On the other hand, there are aspects of the mythology that remain confusing, although all may yet be explained in FEAR STREET: PART THREE.

FEAR STREET: PART TWO – 1978 ultimately works as a standalone piece, though both its strengths and its hints make us want to see PART THREE.