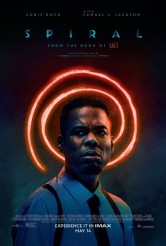 ©2021 Lionsgate
SPIRAL FROM THE BOOK OF SAW movie poster
Reviews

Movie Review: SPIRAL: FROM THE BOOK OF SAW

A SAW by any other name 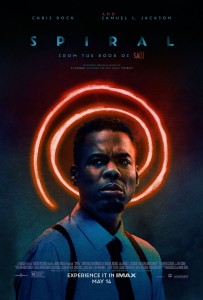 SPIRAL FROM THE BOOK OF SAW movie poster | ©2021 Lionsgate

SPIRAL: FROM THE BOOK OF SAW doesn’t have a Roman numeral in its title. Even so, it is the ninth film in the SAW film series, which began with the original SAW in 2004, directed by James Wan, and written by Leigh Whannell from a story they crafted together.

Like a lot of franchises that start with a movie that was originally intended as a standalone, the SAW films became a tight trilogy that did a great job of explaining what seemed to be loose ends in the first installment. Then it was decided to keep going, and the mythology got more and more complicated. Those who either can’t remember or never saw the earlier films may want to catch up with the very detailed synopses provided on the movies’ IMDb pages.

The basic premise of the earlier SAW films is that genius inventor John “Jigsaw” Kramer (played by Tobin Bell, who doesn’t appear here) is traumatized into vigilantism. He creates intricate traps for people who have seriously wronged others. They have the ability to save themselves, but at great cost, and usually, they don’t act in time, resulting in very gory death. Kramer is dead by SAW IV, but between his penchant for leaving audio/video messages and acquiring disciples, his brand of vengeance continued.

In SPIRAL, we’re back in the nameless, grungy city (actually the grimier parts of Toronto, Canada) that Jigsaw prowled. In the opening sequence, a Metro police detective is lured into a snare in the subway.

When the detective’s colleagues find what’s left of him, they also find a red spiral, Jigsaw’s favored symbol. There’s also a recording, with an electronically altered voice, explaining why the new killer feels the trap was appropriate.

Principled, prickly detective Ezekiel “Zeke” Banks (Chris Rock) was friends with the deceased, and demands to take lead on the case. He is put in charge by Captain Garza (Marisol Nichols), on the condition that Zeke team up with novice detective William Schenck (Max Minghella). Zeke’s dad, Marcus Banks (Samuel L. Jackson), was formerly the city’s chief of police.

There is a sense that Rock, who is a superstar comedian when not acting, may have written some of Zeke’s patter about marriage and adultery when he’s ragging on rookie William. It is misogynistic but snappy. His dramatic work here is passionate and fits well with the overall tone. Minghella is likewise in tune with the material, as is the rest of the cast.

SPIRAL is of the moment in the way that the PURGE films are. The SAW films have almost always had some topical issues percolating under the surface – heartless insurance companies, etc. – but SPIRAL has a more specific and sustained agenda that brings up more thought than usual.

This doesn’t mean that viewers who care about social justice but aren’t into hard-gore horror will take to SPIRAL. Likewise, SAW fans who don’t much care about what’s going on in the real world but love the series should be perfectly happy. Director Bousman and writers Stolberg & Goldfinger know how this should all look and feel, and perform accordingly.

In terms of continuity, we’ve lost the direct connection to the character of Jigsaw (even within this universe, how many disciples could he have had?), without ditching either the psychological or physical mechanics.

For those who do like (or at least don’t mind) some message with their mayhem, SPIRAL poses its questions perhaps a bit more forcefully than its predecessors. The film does well by both those who want to contemplate its dilemmas, and those who just want to plunge straight into the nightmare.