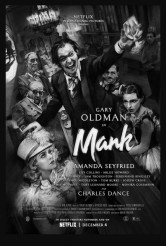 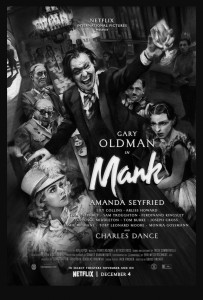 MANK not only set in the 1930s and ‘40s, it does all it can to look and feel like a product of that era. A few R-rated flourishes notwithstanding (a smattering of strong language and a pair of bare breasts), it has gorgeous black and white cinematography, helpful scene-setting supertitles telling us where and when we are (especially useful in a story that jumps back and forth in time), expository snappy banter, and a sense of weight, courtesy of the screenplay by the late Jack Fincher (father of director Fincher).

Ostensibly about screenwriter Herman J. Mankiewicz (played here by Oldman) while he was working on the script that became CITIZEN KANE, MANK turns out to be about quite a lot more. We get studio politics, which we have every reason to expect, but we also get California and national politics, complete with campaign ads where paid performers pose as regular voting folks. (The process may have gotten nastier in recent years, but it’s not new.)

In fact, the suggestion here is that Mank’s impetus for his script is his growing ire at what he sees of abuse of ordinary citizens by not only newspaper magnate William Randolph Hearst (Charles Dance), but at studio boss Louis B. Mayer (Arliss Howard). This aspect gives scope and heft to what seems at first to be a smart, quasi-inside baseball look at old Hollywood.

The big controversy around MANK as a film seems to be exactly how much credit Orson Welles (Tom Burke) deserves for CITIZEN KANE, but that comes off almost as a side matter. In MANK, we get the sense that the fabled movie stems from the protagonist’s creation, but that’s not the biggest thing that’s at stake.

MANK jumps back and forth in time. In 1940, Mankiewicz, laid up with a broken leg after a car accident, is racing to complete the script. He’s signed a contract with Welles wherein he’ll get money but no screen credit. John Houseman (Sam Troughton) anxiously acts as a go-between for the two men. In the ‘30s, Mankiewicz is known for his outsized personality as well as his writing skills. He’s something of a friend to wealthy newspaper baron Hearst, and strikes up a warm, platonic relationship with Hearst’s mistress, actress Marion Davies (Seyfried).

But the more Mankiewicz sees how Hearst and Mayer are influencing the world, the more irate he gets. He hardly sees himself as a crusading hero, but something has got to give.

Oldman conveys the joy Mankiewicz experiences in delivering exactly the right line at the right moment, along with moments of affection, rage, and self-loathing. The real Mankiewicz drank and gambled and lived pretty hard, although his maintained the loyalty of his wife Sara (Tuppence Middleton). Even allowing for what alcoholism does to someone, it’s a bit of a stretch for Oldman to play Mank in 1934, when he’s thirty-seven years old, but that’s still in keeping with the overall old-school style.

Seyfried is charming as the warmer and smarter than she looks Davies. Dance provides a shrewd Hearst, and Howard is a great showboating Mayer. Jamie McShane makes an impression as a film editor whose ambition gets the best of him.

MANK is meta at times. It’s aware it’s a movie, it’s aware we’re aware it’s a movie. When Houseman chides Mank for writing a script that jumps around in time, and Mank counters as to why this is a good thing, he might as well be talking about the film we’re watching as the one he’s devising.

This all works, because director Fincher has style to burn. He’s conscious of what’s being referenced here, but he never allows homage to overwhelm the movie. If we’re never overwhelmed by emotion, we’re intrigued and edified. Most of all, we get the sense that MANK is exactly what everyone involved intended to make.