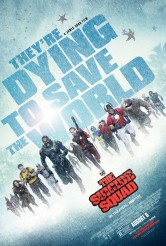 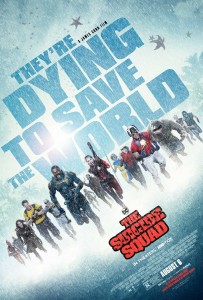 THE SUICIDE SQUAD is a surprisingly buoyant follow-up to 2016’s SUICIDE SQUAD. The earlier film gave us a batch of super-reluctant heroes, actually villains from D.C. Comics, tasked with saving the world from a supernatural menace, since Superman was dead and Batman was only one non-superpowered guy (this was before JUSTICE LEAGUE and Superman’s resurrection).

Among the novice recruits include Bloodsport (Idris Elba), a mercenary who Waller blackmails into participating; Peacemaker (John Cena), who is comically sure of his own righteousness; Ratcatcher 2 (Daniela Melchior), who has an unusual talent; and King Shark (played on set by Steve Agee, voiced by Sylvester Stallone), who is an enormous walking Great White.

We don’t wonder why the Justice League aren’t involved, as the problem doesn’t seem to require their skills. In fact, even with all the firepower involved, we wonder why Waller feels the need to draft the Suicide Squad. They’re called in to overthrow a coup on the South American island of Corto Maltese. But of course, while there has been a coup, there is something much bigger (figuratively and literally) afoot.

There really is something for practically everyone in THE SUICIDE SQUAD. To name every ride in this crazy amusement park would spoil the fun, but let’s say there are big nods to other Warner Brothers projects.

What sells THE SUICIDE SQUAD, though, is the style adopted by writer/director James Gunn. New to the DC Comics movie-verse, Gunn is gleefully gory and profane, but his tone is closer to that of his own GUARDIANS OF THE GALAXY adventures than the solemnity of the recent Superman/Batman films or the earlier SUICIDE SQUAD (that film’s director, David Ayer, has said that the released version is not his cut, but it’s hard to imagine it was as playful as this sequel is).

Gunn finds ways to almost continually surprise and delight us. He gives us a sequence that shows us how Harley experiences a fight, and a genuinely tender relationship between Melchior’s character and her best friend.

Robbie glows with irrepressible joy throughout. Elba is lower-key, but just as much a standout. Despite Bloodsport’s homicidal background, he emerges as the audience surrogate, who reacts pretty much the way we do as problems and insanities pile up. Cena demonstrates steady comedic timing, and David Dastmachian is inventive as a quiet fellow with a truly gonzo power. And who (or Who, even) better to show up as a mad doctor than Peter Capaldi?

It’s also nice to see a director who brings back favorite actors, and several of Gunn’s recurring colleagues, including Michael Rooker, Nathan Fillion, and Gunn’s brother Sean, all made the squad as well.

Having given us various incarnations of Groot, Gunn knows how to position King Shark as a much deadlier version of the same general notion. The filmmaker and the special effects department make the most of the big fellow’s destructive capabilities.

There is much more to praise here, but a lot of it is spoilerific. Arguable drawbacks include a little too much reliance on flashbacks and flashforwards, but momentum is strong overall.