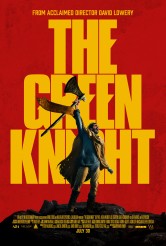 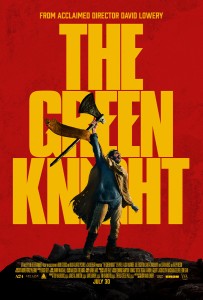 THE GREEN KNIGHT may put fantasy film buffs in mind of John Boorman’s EXCALIBUR or even Neil Jordan’s THE COMPANY OF WOLVES. Adapted from Arthurian mythology by writer/director David Lowery, THE GREEN KNIGHT is beautiful and mysterious – and more than a little trippy.

Let’s stipulate up front that the plot doesn’t fully make sense. The source material, an anonymously-written medieval poem, translated into contemporary English by J.R.R. Tolkien, has survived over time because of its striking central premise (and possibly because of its translator). Lowery has preserved this, though he’s altered or at least obscured so many other details that what used to be clear by the finale – X character has done Y in order to achieve Z result – is now extremely ambiguous.

We are told, in Old English-style rhyme, that this is definitely not a tale of King Arthur. Instead, we meet Gawain (Dev Patel), an aspiring knight of the court. The King (Sean Harris), not explicitly called Arthur although he presides over a round table, is brother to Gawain’s witch mother (Sarita Choudhury). Gawain attends the royal Christmas feast, though his mother does not; she is busy with her coven. The King asks Gawain to sit by his side, wanting to know his nephew better.

The festivities are interrupted by the arrival of the Green Knight (Ralph Ineson), a fearsome being who appears to be made of living wood. The Green Knight proposes a “game”: one of King’s knights may strike him, anything from a scratch on the cheek to a lethal blow. A year later, the knight must journey to the Green Chapel to receive an equal blow in turn.

Gawain rises to the occasion. Unable to get the Green Knight to actually fight, Gawain cuts the being’s head off. Imagine his reaction when the Green Knight retrieves his head, reattaches it and leaves, reminding Gawain of the rules that have been set.

When the following Christmas approaches, an uneasy but resolute Gawain rides off in search of the Green Chapel. His adventures include encounters with thieves, ghosts, giants, and a persistent fox. He stays for a time in a castle occupied by the Lord (Joel Edgerton) and Lady (Alicia Vikander, who also plays Gawain’s back-home lover Issel), both of whom are keenly fascinated by the young man.

THE GREEN KNIGHT has such a rich visual texture that we want to reach out and touch it. Jade Healy’s production design and Malgosia Turzanska’s costume design are marvelously imaginative and Oscar-worthy, stunningly photographed by cinematographer Andrew Droz Palermo.

Additionally, Patel brings empathy and dimension to Gawain, even though some of his actions leave much to be desired, from his initial encounter with the Green Knight (he could have just scratched the entity’s cheek, after all) to his treatment of the wise and loving Issel. The actor brings Gawain’s dilemmas to the surface, as we see his struggle between who he truly wants to be and who he currently is.

THE GREEN KNIGHT is, even in its poetic origins, meant to be enigmatic and symbolic. Lowery’s film certainly lives up to this. However, there are so very many “perhaps” aspects to the storytelling that it becomes impossible to tether various pieces to each other. Elements that are painted with deep significance don’t take on added resonance with later revelations. By the end, we’ve got so many questions that the whole feels like less than the sum of its parts.

Nevertheless, THE GREEN KNIGHT is well worth seeing. We may not wholly understand what transpires there, but it does transport us to its own magnificently fleshed-out world.