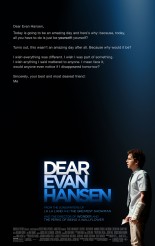 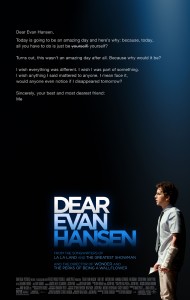 DEAR EVAN HANSEN is a new musical film, based on the stage production, which won Tony Awards for Best Musical, Best Book of a Musical, Best Original Score Written for the Theatre, and Best Performance by an Actor in a Leading Role in a Musical.

Not having seen the live version, this reviewer cannot make any comparisons, only evaluate the movie on its own terms. Steven Levenson, who wrote the stage edition, adapted the screenplay, and original composers/lyricists Benj Pasek and Justin Paul reprise their duties here.

Ben Platt, who won the aforementioned Actor Tony as Evan Hansen, recreates his role here. Evan is a high school senior struggling with anxiety, depression and anorexia, among other things. Platt has a great voice and a persuasive attitude, even if he looks a little older than seventeen.

DEAR EVAN HANSEN starts with an angsty rock ballad, as our protagonist contemplates his paralyzing self-disgust. His therapist has advised Evan to write a letter to himself – hence “Dear Evan Hansen.” Evan’s self-address musings begin with forced optimism, but devolve into anguish.

Evan has a crush on high schoolmate Zoe Murphy (Kaitlyn Dever), but barely knows her rage-filled brother Connor (Colton Ryan, also a veteran of the Broadway version). Through a convoluted set of circumstances, Connor winds up with the “Dear Evan Hansen” letter.

Then Connor commits suicide. When the letter is found with him, his mother (Amy Adams) and stepfather (Danny Pino) assume that Connor wrote the letter to someone who seems to know him well, i.e., Evan.

When the Murphys invite Evan to their home, it means so much to them to think that Connor had at least one friend – Evan – and that he at least tried to reach out, Evan doesn’t have the heart to correct them. In embellishing what Connor’s parents want to hear, Evan creates a fantasy best friendship with Connor; he also actually gets closer to Zoe.

And then, as these things do, the deception takes on a life of its own.

On the one hand, DEAR EVAN HANSEN has a pleasingly quasi-classical plot device, revolving as it does around a misunderstood missive. The score is mostly folk-rock, in the style of Stephen Schwartz. It’s well-sung by performers with strong singing chops and plenty of emotion, and the comforting lyrics have clearly struck a nerve with many theatregoers.

Standouts in the cast include Ryan, who is exuberant in imaginary flashbacks, the ever-excellent Dever, and Amandla Stenberg as a seemingly popular student who has her own issues.

But film director Stephen Chbosky appears to be a little unsure of how much he wants to open up the material. We do go outdoors, but somehow DEAR EVAN HANSEN feels very much like an interior piece, even when a song is about green trees and open skies.

Class also enters the storyline, and here the production makes a common but still distracting mistake. Evan and his mother (an on-target Julianne Moore) are meant to be struggling financially. They don’t have to live in a roach-filled apartment, but their house looks to be as big as the one owned by the better-off Murphys.

The storyline doesn’t resolve with any particular cleverness; we feel like we’re meant to get more out of the ending than we’re given. This may be one of those works that needs the power of shared space between actors and audience to fully come to life. Here, there’s a bit of a sense by the end that this is a better-than-usual very special episode of a high school drama.

Still, mental health, particularly for adolescents, is always worth examining, and if DEAR EVAN HANSEN’s gentle, encouraging songs give anybody hope, that’s good.