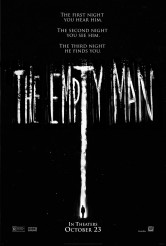 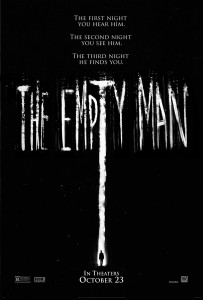 THE EMPTY MAN was prematurely buried – not the entity, the film itself. Copyright 2018, THE EMPTY MAN received a blink-and-miss-it theatrical release in October, 2020, followed by a somewhat more accessible DVD/Blu-ray rollout on January 29 of this year. It is now available on HBO and HBO Max.

The fact that THE EMPTY MAN wasn’t more heralded may or may not be due to the acquisition of its distributor, Twentieth Century Fox, by Disney. The latter doubtless had other pressing concerns around the that the movie was ready to debut.

In any case, THE EMPTY MAN is worthy of attention for several reasons. First and foremost, it is good – creepy, atmospheric, and well-acted. Second, director/writer David Prior, in adapting Cullen Bunn’s graphic novel, adroitly juggles several horror subgenres.

First, we have a prologue sequence in Bhutan’s Empty Valley in 1995. Four young hikers go into the mountains. Two of the four have an uncanny experience in a crevasse leading to a cave system. They emerge, only to be trapped in an abandoned cabin for three days by a ferocious snowstorm. Things happen.

At first, THE EMPTY MAN seems to be broadly heading in the direction of CANDYMAN and Bloody Mary myth territory, with an otherworldly figure that can be summoned by ritual.

But Prior and the movie have much more on their minds than just a strong, straight-up scare riff. While it doesn’t harp too hard on messages, and would never dream of pointing arrows of allegory, some of THE EMPTY MAN feels greatly of the moment we’re in right now (things that were true in 2018 are, alas, still with us).

This isn’t to slight the horror. Buffs will notice nods to H.P. Lovecraft, David Cronenberg, THE WICKER MAN, and even Rod Serling here that all come together to produce a satisfying chill.

There are a few wait-a-minute story aspects here that may or may not make more sense on a second viewing. Also, while Prior sensibly consigns early exposition to Lasombra’s Internet search, one poor performer is given a mouthful late in the game.

Dale is a perfect world-weary protagonist, and Ireland puts heart into her character’s worry and grief. Stephen Root makes a lasting impression as a personable nihilist.

At two hours and sixteen minutes, THE EMPTY MAN feels almost like a miniseries. It may be a little leisurely in places, but mostly the movie fills its time with potent imagery and disturbing impact.