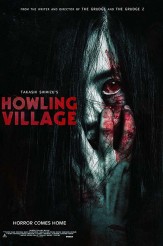 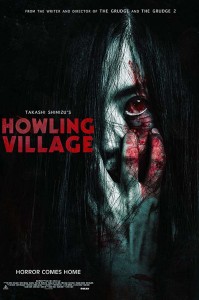 HOWLING VILLAGE (INUNAKI MURA) is directed and co-written by Takashi Shimizu, who created the popular 2002 JU-ON: THE GRUDGE, which has spawned a franchise. JU-ON: THE GRUDGE was more than a little ambiguous, and misleadingly titled (it’s about rage, not a “grudge” as the term is used in English), but it fulfilled its main purpose in scaring the daylights out of viewers.

Unfortunately, HOWLING VILLAGE has some of the same problems as JU-ON, without being especially scary. It’s creepy, has great production design, and offers some beautiful views of the Japanese countryside and architecture. It’s also got so many narrative issues that it frequently derails. This is not helped by moments of what seem to be unintentional humor.

The original title of HOWLING VILLAGE is INUNAKI MURA. There really was an Inunaki Village and tunnel, though Shimizu and co-writer Daisuke Hosaka have put their own spin on the related lore.

At the beginning, it looks like we may be in for a riff on THE BLAIR WITCH PROJECT, as bubbly teen Akina (Rinka Ōtani) and her dragged-along boyfriend Yuma (Ryŏta Bandŏ) are seen on video, taking a call in a phone booth at night, then going in search of the Howling Tunnel, which is supposed to lead to the Howling Village.

These are both notorious “spirit spots,” which are apparently tricky to locate. At the risk of being spoilerific, the phone is bright green, in a red phone booth, in what we eventually see is a highly public place, with no other phone booths nearby. How is this supposed to be hard to find?

One actually good bit is when Akina and Yuma come across a downed sign that says (in Japanese, subtitled for us), “The Constitution of Japan does not apply beyond this point.” This signals that HOWLING VILLAGE has something on its mind.

Akina finds her destination. Yuma is able to extract her, but she is not the same.

Then HOWLING VILLAGE switches to normal narrative footage and we meet Yuma’s sister Kanade (Ayaki Miyoshi), a young psychologist at a nearby hospital. She is called on to treat a little boy who is troubled by night traumas, and seeing things that aren’t there – which Kanade starts to see herself.

We also meet Kanade and Yuma’s little brother Koda, submissive mother Ayano (Reiko Takashima), and brutally disapproving father Akira (Masanobu Takashima), who is as awful to his wife as he is to Yuma.

Kanade and Yuma are both drawn separately to investigate what’s behind the myth of the Howling Village. This much makes sense. We also get why, in a culture that prizes family honor, secrecy has been handed down generationally.

At the heart of HOWLING VILLAGE is a non-supernatural matter that is a tragically common type of story all over the world. The filmmakers have commendable aims in this regard.

However, they attempt to stuff far too much coincidence and exposition into what’s happening. Additionally, there’s a plot point that would be offensive if it wasn’t so completely mishandled as to be relatively funny. An ostensibly menacing, possibly cursed wild dog is played by a German shepherd so docile that he/she won’t even growl. (Being “forced” into a cage by a villager, the dog trots along at “walkies” pace.)

By the end, HOWLING VILLAGE emerges as something of a mess with good intentions. It’s intriguing for Western audiences for its handsome Japanese vistas, and it’s not absurd enough to be a howl, but it’s not exactly good, either.