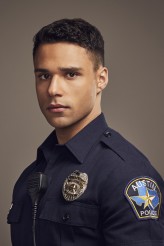 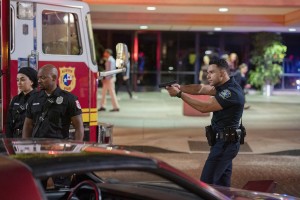 9-1-1: LONE STAR follows emergency services workers in Austin Texas. The 9-1-1 spinoff wraps up its first season on Monday, March 9. So far, the series primarily follows the firefighters of Firehouse 126, but we also see paramedics and police.

Silva has appeared on MADAM SECRETARY and in the film FLUIDITY, but 9-1-1: LONE STAR is his first series regular role.

ASSIGNMENT X: Are you from Texas?

RAFAEL SILVA: No. I was born and raised in Brazil.

AX: What brought you to the U.S.? The film industry?

SILVA: No, absolutely not. I actually started acting when I was a junior in high school. I used to be very afraid to speak in public. I figured if you were going to be afraid of something, you might as well be in the eye of the hurricane. So I started acting because I was afraid of speaking in public, and then I got over that fear, and I moved to the United States when I was thirteen. Acting was never really something that I thought of pursuing. It was just more of a savior kind of thing for me. I started acting in high school. Then I went to college, and then almost two years later, I booked this. This is my first job.

AX: Did you do a lot of stage when you were in college?

SILVA: Once. I went to BFA [Bachelor Fine Arts] acting for film and television, voiceovers and commercials. So I did once on stage and one short film.

AX: Obviously, there are more people, there’s pay, and the equipment is higher-grade, but is there a big difference in acting for the show and acting in class?

SILVA: Oh, absolutely. They tell so many stories because we were taught by acting professors, and professional actors, and they would tell us stories about being on set and what it meant to be on set. But being on set has been a complete shift to how I thought as an actor, how I approached the craft. It really has allowed me to be a lot more empowered and encouraged, to really dive into the craft, be more specific, love it even more. It’s completely different. It’s a completely different world.

AX: What is Carlos’s attitude towards his job? Do we know why he became a police officer? Or will we find out?

SILVA: You will definit 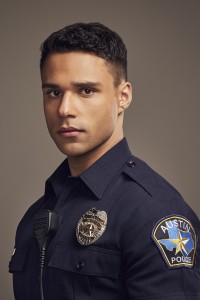 ely find out. But I can tell you one thing. Officer Carlos Reyes is very dedicated to what he does. If I can say this, it’s almost an escape for him, being a cop. He’s very put-together, and I think that’s very safe for him. He likes order, he likes control, and it’s very interesting when he loses control of things.

AX: He’s having mixed results with control in his relationship with T.K. …

SILVA: Yeah, in the first episode, that’s the idea that we were looking for, that type of relationship. What’s great about this show is the fact that two main characters, they start to have a relationship, and they just so happen to be gay, and we have Brian Michael Smith [who is a transgender man playing a transgender man] in the main cast. So the representation LGBTQ characters, I’d say that’s pretty big.

AX: And it also breaks down stereotypes about what kinds of jobs gay men want to have, and can do. That is, you don’t want to tell people they can’t do whatever they want, but on the other hand, you don’t want gay people to be shown as only doing certain types of jobs.

SILVA: Exactly. And I think the beautiful depiction of Carlos, at least in this show, in this storyline, is the fact that there are people in the police force, in the firefighter force, in the department, people who fight and give their lives to save other people’s lives, who just happen to be gay, and their sexualities don’t mean anything.

AX: Have you had to do any kind of training to play a police officer?

SILVA: Yes, I did. I do individual training, I work out, I make sure to stay really in shape. I read the Austin manual handbook to be a police officer, which is about seven hundred and eighty pages, maintaining that consistency, studying. I’m someone who loves to study. I also trained with Chick Daniel. Fox has provided a personal police officer to train me. We have met several times. The support that I receive from Fox for this role has really been amazing.

AX: Like most of the cast, you also have to line dance. How is learning line dancing in terms of the curve of difficulty? Is it harder to learn to use a handgun?

SILVA: [laughs] You know, I love dancing, so it was pretty easy. I love having fun, and every time we’re on set, we try to have fun, we try to do what we came here to do, which is have fun, portray the story, and yeah, play with each other. 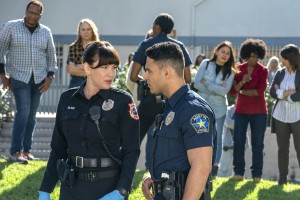 AX: It looks like there’s an episode of 9-1-1: LONE STAR that has a cyclone. Have you had to deal with wind machines and all of that?

SILVA: A lot of rain. Fox does such a phenomenal job in recreating everything that’s on the page, in terms of accidents, in terms of weather-related accidents. Fox is literally recreating the storm, the accidents, every time we’re on set. So it’s really perfect.

AX: Are you doing any kind of a Texas accent for Carlos?

SILVA: Not necessarily, no. I chose not to. I chose for him to be of Mexican descent, and he grew up, he was born and raised in Austin. Austin happens to be the very liberal, one of the blue dots in Texas, so that presence, that Southern rural presence, I don’t think he was very much exposed to.

AX: Most people tend to grow up kind of sounding like our parents, no matter where we’re from.

SILVA: Right. And I think there is the Spanish language that comes with it. I speak both Portuguese and Spanish. I think that the naturalness of speaking another language kind of comes through English, and I think that was kind of his upbringing.

AX: And what would you most like people to know about 9-1-1: LONE STAR right now?

SILVA: We have great characters. I think every single story is truly amazing and unique, but I think [co-creator/co-show runner] Tim [Minear], [co-show runner] Rashad [Raisani], [co-creator] Ryan [Murphy], [co-creator] Brad Falchuk, [director] Brad Buecker, they have really created amazing characters, strong characters, all with their complexities and histories, and it’s really humbling to be part of such a beautiful cast who can portray that so beautifully and so honestly. We’re here to have fun. I would say you’re going to see a lot of people having fun.