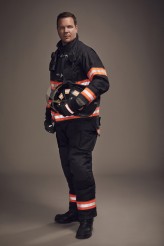 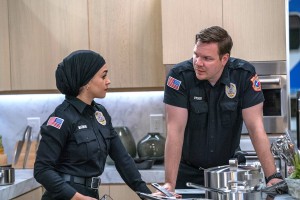 9-1-1: LONE STAR, now in its first season Monday nights on Fox, deals with the emergency services in Austin, Texas. Rob Lowe plays new fire captain Owen Strand, brought in from New York to rebuild the local fire station after an explosion has killed most of its crew.

Parrack, originally from Allen, Texas, has worked across stage (he played Lenny in a recent Broadway revival of OF MICE AND MEN), film and television. Movie credits include BATTLE: LOS ANGELES, FURY, and SUICIDE SQUAD. On TV, Parrack spent seven years playing human Louisiana native Hoyt Fortenberry on TRUE BLOOD; he’s also had arcs on THE DEUCE and RESURRECTION.

ASSIGNMENT X: You have a Texas accent in real life, but your accent on 9-1-1: LONE STAR is much stronger than your normal speaking voice. Was that something you discussed with the producers?

JIM PARRACK: No. For the audition, I read the sides, and it seemed very apparent that this was someone who, part of their identity was how proud they were of being a Texan. So I just had an instinct for that. 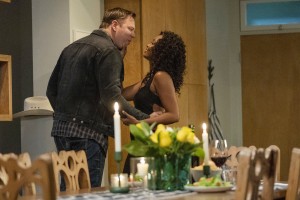 AX: So Judd leans into it, just as a matter of identity?

PARRACK: I don’t want to say it’s as deliberate as someone leaning into it. Because usually when people lean into something like that, they’re leaning away from something else. I think it’s just somebody who happens to like the way life shaped them. They like where they’re from, they like what they do, they like how they go about the business of living.

PARRACK: Oh, man. When the opportunity came, the feeling was a strong one of, this is a really good thing to get familiar with and get to act. I think I like comfort far too much to pluck it out as a life choice for myself. My admiration for these people and what they do has gone through the roof, and the kind of courage that they have, and the willingness they have to do what has to be done, is something we’ll probably only ever approximate with the acting. There’s no way [without doing it in reality] to really know what that’s like.

AX: Do the technical advisors for 9-1-1: LONE STAR show you how to carry the gear in a way so that you don’t throw your back out or strain your neck with the weight of carrying it all?

PARRACK: Probably inadvertently, when they show us the proper way to do something, like the protection of our body is factored in.

AX: Do they talk with you about the psychological aspects of the job?

PARRACK: They give specific advice, and they’ve done a good job of leaving stuff like the mentality up to us. We all have different mentalities within the cast, and so I trust that the rest of the gang is doing what they have to do to feel like firefighters, and I did my weird actor stuff that I had to do. 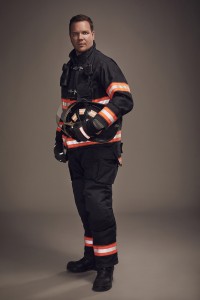 AX: When you’re involved in a physical task where there’s more than one of you on it, like a group of firefighters handling the fire hose or a ladder, is that like dance choreography?

PARRACK: It’s so intuitive. But it is like dance choreography. Apart from maybe the technicians, who’ll say, “Here’s how you hold this axe,” or this or that, or “You would go here,” the rest is us, really. And it’s a great thing for actors. We must pay attention to each other, and be connective and communicative, and then the right things happen. But if anybody’s not involved with the whole situation, if any one person is like that, the wheels come off.

PARRACK: I love it. Any built-in excuse to not be thinking about myself while I act, I welcome.

AX: Have you had any actor bonding sessions, either with the rest of the people playing your fellow firefighters, or you and Sierra Aylina McClain, who plays your wife Grace?

PARRACK: Yeah, both. We all took to each other pretty quickly, particularly the fire crew, and then Sierra, we’re just very happy that we get paired up. Right from the beginning, I could tell, she’s a really trustworthy human being, a really high-quality person, who’s also a really, really gifted actor. And if you’re doing a meaningful relationship, that’s exactly who you want to be paired up with.

AX: Grace seems to be the voice of reason on the show at the moment.

PARRACK: I think she’s definitely less impulsive and wiser than I am [as Judd].

AX: In the pilot, there’s a very moving moment where Judd breaks down in front of the wall that’s a memorial to his fallen co-workers. Is he going to be working through grief throughout the rest of this season?

PARRACK: Yeah. Well, I don’t know about the duration of it, but that’s part of what we’ve shot so far, is he’s beginning to address that stuff. I think these writers are good enough to not just make it go away. I think it needs to be resolved.

AX: Is that grief difficult to hold onto, week after week?

PARRACK: Well, to answer as honestly as I can, I’m going to have to say [laughs], I haven’t done it long enough to know the effects yet. Meaning, I might see you on the street in May and be like, “Goddamn, that really took a toll on me.” I don’t know yet. I don’t think so. I had prepared for a similar situation with another role ten years ago, dealing with PTSD, and I got comfortable with the idea of acting that a long time ago, and right or wrong, my approach to it is cause a deep emotional problem for myself, and then cover it up. That’s what it’s like, I guess, so that’s about as close as I can come. And in those scenes you’re talking about, I wasn’t able to cover it up anymore.

AX: Playing Judd, which is more difficult for you, the physical aspect, or the emotional aspect?

PARRACK: The emotional. The physical isn’t as difficult as it is uncomfortable. But it’s not hard. The emotional on top of being uncomfortable – it’s elusive sometimes, right? It’s not normal for grownups to try to experience difficult things. In fact, we spend most of our life avoiding that. So I’m grateful that I have really good training from my acting teacher, Robert Carnegie at Playhouse West, who taught me some principles that have let me grow into acting a little, and they don’t involve injuring myself in order to reach a personal place emotionally, so I’m grateful for that.

AX: 9-1-1: LONE STAR was created by Ryan Murphy, Brad Falchuk and Tim Minear. Had you worked on any of their shows before?

PARRACK: No, I never have. In fact, the only one I’ve ever seen was, I used to watch NIP/TUCK [which was created by Murphy]. I was a big fan of that.

AX: Rob Lowe told a story about how he discovered after the fact that the part on NIP/TUCK had been written for him, but his agents never showed him the script and Julian McMahon wound up in the role. Have you ever had that happen, where there was a part you wanted, and you found out later you were supposed to get it?

PARRACK: No. Not where somebody failed to do their job. I’ve had parts that I’ve wanted desperately, and they’ve gone to other people. I try to keep a pretty open heart to all that. I pray a lot. I’m like, “Put me where you want me, not where you don’t.” And so if I want it but I don’t get it, I’m like, “That’s okay, it’s not part of the plan.”

AX: Do you have any preference between film and television and stage?

PARRACK: I do, yeah. The cool thing about TV is the security over an extended period of time, and the possibility of developing a role over a long period of time. The great thing about film and theater is, there’s a beginning, middle, and end, and you know once this is complete, it’s over forever, right? And so you know everything that’s going to be asked of you, and that’s going to be useful to you. I think, from pure acting, theater is the best. My favorite medium [as a viewer] is movies, but I like that in TV, you do have some time to keep playing with things and try to evolve.

AX: Do you like the idea that, on a TV series, your character can change over time, or do you worry that you’re going to make an acting choice now that’s going to be contradicted later?

PARRACK: Yes. I had kind of resigned myself to, “I may not work as an actor again for awhile, that’s okay.” I had taken some time off to do other things. And I started to write and develop with a really strong team a movie that’s a modern telling of the Biblical parable of the prodigal son. Nothing to do with the show PRODIGAL SON, but the old parable. As soon as we get back to the hiatus for [9-1-1: LONE STAR], I’m going to make all the arrangements necessary, so that for the second hiatus I’ll be able to shoot the movie.

PARRACK: That the people you’re watching care about you and want you to be a part of the thing that we’re going on. We have a lot of discussions on set about what we entrust to the audience. We don’t want to explain things to them – we’re giving them credit, and if they watch, they’ll be a part of it. There are a lot of shows, and everybody knows it, where they instruct you while you watch instead of invite you in, and we’re not like that.