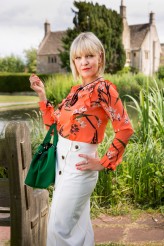 The actress talks about her title role in the U.K. series 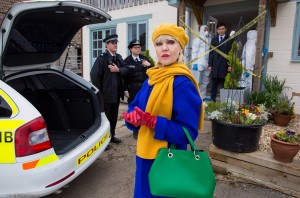 AGATHA RAISIN is based on the series of comedic murder mysteries by the late M.C. Beaton (real name Marion Chesney Gibbons). Ashley Jensen plays the title character, a well-to-do former p.r. woman who moves to the English countryside and finds herself compelled to investigate local crime. Season 3 premieres on the streaming and on-demand service Acorn TV on Monday, February 10. Seasons 1 and 2 are also available.

Jensen, originally from Annan, Scotland, was nominated for both Emmy and BAFTA Awards for her work in the series EXTRAS. In the U.S., she is probably best known for her work as series regular Christina McKinney in UGLY BETTY.

AGATHA RAISIN has an unconventional production history. Although it is now on its third season, its first season premiered in 2014. It then was out of production until 2018, when Season 2 was finally made.

ASSIGNMENT X: Can you explain the long hiatus between AGATHA RAISIN Seasons 1 and 2? 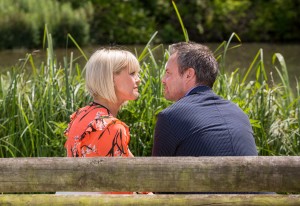 ASHLEY JENSEN: We did a pilot that was ninety minutes, “The Quiche of Death,” which everyone thought was wonderful, and then it was picked up for eight one-hour episodes, by [the British network] Sky, and then, much to everyone’s surprise, the show was canceled. No one could believe it. Everyone thought, “But this is a show that could run and run and run. We love this character, we love this band of characters, we love these stories.” But it was canceled. But then Acorn came along and looked at it and went, “We want it. We’ll have it. We’ll support it. We will do it.” So we are so grateful to Acorn, and to America, for waving our flag, and resurrecting our ship again.

AX: You were in America for a bit and had a lot of success with UGLY BETTY.

JENSEN: Yeah. I had a little boy, and I think things kind of changed a wee bit, and I was like, “Oh, I’d quite like to be near my family.” And also, in America, I think, you do shows that are twenty-two episodes, or twelve episodes, and you’re in one show. And I figured, “Oh, I’d quite like to do a few more things within that year.” A season for us [on U.K. television] is six episodes, or even four episodes, so it would enable me to do more things, and more smaller jobs that I can fit in around being a mum as well.

AX: I haven’t read the books, but I understand that your Agatha Raisin in the TV version is a bit different than she is on the page …

JENSEN: Well, she’s physically very different from me in the book. She’s from Birmingham, and I’m not, she’s a little bit older than me, she’s a different physical shape from me, she has brown hair, and dark eyes. I couldn’t be more opposite, really. But they obviously saw something in me that they thought that I could bring to the television version of this character. And I was a little trepidatious at first, because you are, because when people love a book, they have their own idea of what the character is like. And I was like, “I don’t look like Marion’s version of this character.” But I got Marion’s blessing and she has totally been behind me the whole way and said, “When it’s for television, things change. It’s twenty years later, and I think she [Jensen] actually has the essence of this character, rather than the physical appearance of the character.” 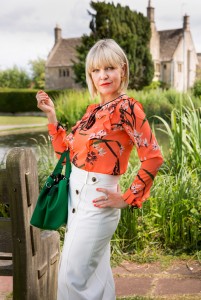 AX: What is your take on Agatha Raisin as a character?

JENSEN: Well, there are quite a lot of levels to her, really. I think that, on the surface, she’s incredibly well-groomed, very much in control of her appearance, and she doesn’t take no for an answer. Which is very different to me, because I think I’m much more of a people pleaser, and much more of an, “Are we all right? Has everybody got a seat? Has everybody got a cup of tea?” Agatha wouldn’t care about that. She would just knock on someone’s door, “Can we see you?” “No.” And then she would find a way of worming her way into a situation, and getting what she wants for her own gain, which is always fun to play.

JENSEN: Yeah, I know what you mean. I think I’m a bit more Scottish in real life, I think, and I’m a bit more rough around the edges, in every sense of the word.

AX: What would you most like people to know about this season of AGATHA RAISIN?

JENSEN: Oh, gosh. I think what’s happened with this season – every season we’ve done, we’ve cranked up everything in terms of physical comedy. It’s almost in Technicolor. We’ve got a whole medieval battle re-enactment. You do that here, don’t you, in America, with the big [Renaissance] Faire thing. So we have one of those, which was all actual re-enactors that were doing it. So that was fun. And lots of very quirky, odd murders in beautiful countrysides. I think it’s getting brighter and bolder, and more confident with each new season that goes on, and the whole ensemble cast has really come together, and we’re all bouncing off each other.