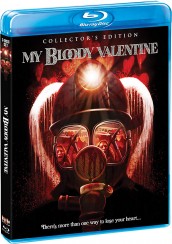 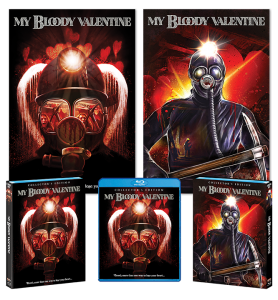 The 1981 slasher film MY BLOODY VALENTINE continues to have its fans and cult following after 39 years, but it’s also a film that was plagued by MPAA cuts upon its initial release.

During the height of the slasher craze, there was a rash reaction to overthink the extreme violence in these horror movies and the hyper-realistic practical gore and kills which fans loved. Hence, the MPAA would slice, dice and cut the movies key killing sequences to a point where they felt strangely bland and truncated.

MY BLOODY VALENTINE was hit the hardest. Watching the original theatrical version, it’s comes off as a moody and rather effective horror film, but every time someone is murdered, the scene cuts away from the gore. It’s was almost as if you were watching a heavily edited TV version of the film. Thankfully, ten years ago, the original excised footage was uncovered and reinstated in a previous Blu-ray release where the cut footage branched off the theatrical version. The quality of the new footage was poor, but at least the intent of what director George Mihalka was going for was finally seen.

Now, nearly ten years later we have Shout! Factory to thank for finally delivering the ultimate edition of MY BLOODY VALENTINE – presented in a two-disc special edition which includes a 4K transfer of the original theatrical cut and a 4K Unrated Version of the film as well. The good news: all those cut scenes have been remastered too and now flow seamlessly in this new presentation of the film. 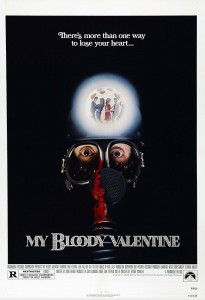 The story takes place in Valentine’s Bluff – a mining town that has a dark past that includes serial killer Harry Warden (his motif is cutting out the hearts of his victims). He survived a horrible mining accident that resulted in him going on killing spree on Valentine’s Day. He was captured and taken to a mental institution, but now decades later it appears that he’s returned and is out vengeance because the town has reinstated the long dormant Valentine’s Day party for the first time in 20 years.

There are hints that perhaps one of the miners is in fact Harry Warden – so it provides a nice mystery throughout. And while these aren’t the traditional teens led to slaughter usually found in slasher films of this era, the characters still engage in activities that lead to their demise like bringing the party to the coal mines despite warnings from the cops and crazy townies not to do so.

MY BLOODY VALENTINE stands tall above other films from the early 1980s due to its unique setting and the creation of a pretty effective and scary villain. Wearing a coal miners outfit and mask – you don’t have to do much to make Harry Warden a scary and memorable villain.

This set from Scream Factory has two discs loaded with extras. Disc 1 includes the original theatrical cut scanned in 4K and as stated before, it’s the best this film has ever looked. There are seven lengthy individual interview featurettes from the cast (Paul Kelman, Lori Hallier, Neil Affleck, Helene Udy, Rob Stein), director Mihalka and special makeup effects designer Tom Berman. Their interviews go into detail about the evolution of the film, filming and the cult following that has grown in subsequent years.

Also included is a nice featurette showcasing the differences between the theatrical and uncut version of the film. While it’s fun to watch the unrated cut and then go back and revisit the theatrical to see what was slashed so to speak, this featurette cuts to the chase. It’s apparent the special feature was completed prior to the remaster, because many of the “unrated scenes” are shown in their low-rez form.

Rounding out this disc is the standard theatrical trailer, TV spots, radio spots and photo gallery. 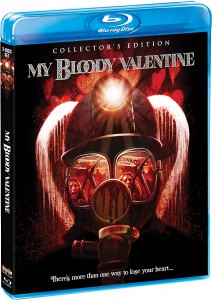 Disc 2 brings the Unrated Cut (which is what should be watched first) and it too is scanned 4K and the unrated material was rescanned as well and is seamlessly re-integrated into the film (unlike previous home entertainment versions).

There’s a new commentary from director Mihalka, a featurette from The Bay Of Blood Convention in Florida that featured the cast and the director celebrating the 35th Anniversary of the film. Also from the same convention is a featurette of Thomas Kovacs performing the theme song “The Ballad of Harry Warden” from MY BLOODY VALENTINE with Peter Cowper and Jim Murchison.

Scream Factory kicks off the year right with this excellent MY BLOODY VALENTINE Blu-ray. It’s also one of the first of many films they’ve licensed from the Paramount Pictures vaults. If this two-disc set of MY BLOODY VALENTINE is any indication, I can’t wait to see what they do with APRIL FOOL’S DAY, PET SEMATARY 2 and ESCAPE FROM L.A. which are all due later this year.