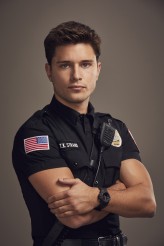 The actor talks playing a firefighter on the new series 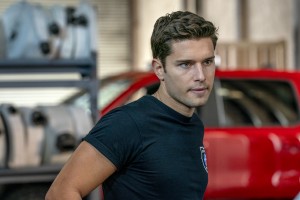 Ronen Rubinstein plays Owen’s son and fellow firefighter T.K. Strand. One of the reasons for the move to Austin is Owen’s desire to get T.K. out of New York City after the young man attempted suicide following a disastrous romantic breakup. Now T.K. is trying to maintain his hold on being clean and sober while embarking on a tentative new relationship with police officer Carlos Reyes (Rafael Silva) and fitting in with the local community of first responders.

Rubinstein, born in Israel, recently completed filming on the feature FOLLOW ME. His other film credits include BUSHWICK BEATS and CONDEMNED. Rubinstein was also a series regular on the horror series DEAD OF SUMMER.

At a Q&A session for 9-1-1: LONE STAR, Rubinstein expresses his enthusiasm for the physicality of the series. “I think a major advantage of the show is that most of the stuff that you see onscreen is practical effects. So when we get thrown into [a scene where a storm is whipping through town, causing vehicular havoc], that’s rain pouring down on us. Yeah, it’s not real rain, but when we’re thrown into these situations, it feels real. And our bodies are sensing that, and our minds go into the situation. There’s not really much that we have to fake. And usually, it’s the group together. So when you can get through something like that, that’s a big bonding experience right there. Because then you’re hyped. You’re at lunch and you’re like, ‘Whoa, we just saved someone from a car crash. And there was real rain, and we were wet’.”

Later that evening, Rubinstein makes himself available for follow-up discussion. 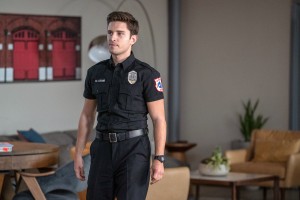 ASSIGNMENT X: Is there an aspect of playing a firefighter that you found either very enjoyable or very challenging?

RONEN RUBINSTEIN: I find it all enjoyable, even when it’s challenging. I truly look at these people [real-world first responders] as the real superheroes. When there’s crisis or there’s something awful happening in the world, we’re not calling on people with capes and tights. It’s firemen, it’s cops, it’s medics. So I’ve always had a tremendous respect for them, but it’s only elevated and grown.

AX: Do you have things where multiple actors have to handle the piece of equipment together, like a firehose?

RUBINSTEIN: Yeah, absolutely. We’ve done a massive firefighting scene, where I’m leading the hose, and Brian Michael Smith [as firefighter Paul Strickland] is behind me. It does take a couple people to hold that thing. There’s so much force coming out of that not just one person can handle it.

AX: How much have you studied or discussed with real firefighters about their reactions to emergency situations?

RUBINSTEIN: The biggest thing that I take away from firemen is, they are at a constant level of calm, and they’re very collected, and there is no panic involved. Because they can’t show the people that they are trying to save that they’re panicked or scared, or anything like that. So you have to keep a very balanced, level attitude when you approach these crazy missions.

AX: Were you excited about getting to play the son of a character being played by Rob Lowe? 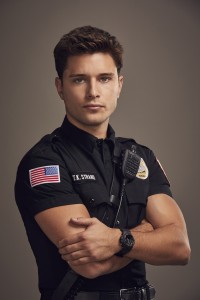 RUBINSTEIN: Of course. Any time you get to work with someone who’s been doing it for so long, and has such a career – I mean, I feel so fortunate and blessed to be in this position. Because I’m sort of fresh in this business. And not only Rob Lowe – I get to work with Liv Tyler, and I just feel extremely fortunate to be able to learn and watch them every day on set, and to be beside them. It’s been amazing. The stakes are higher, but it puts you on your A game. And it really makes you a better actor, and a better person, and a better professional. I think that’s the biggest thing I’ve taken away, is that with the responsibility that I hold of playing Rob’s son, everything has to be elevated, and I think I’ve come up to the challenge.