The co-creators chat about their new comedy aimed at parents

BREEDERS premieres its ten-episode first season on FX on Monday, March 2, and it thereafter available on FX on Hulu. The comedy about the sometimes exasperating ups and downs of parenting young children is seen through the eyes of English couple Paul, played by Martin Freeman, and Ally, played by Daisy Haggard. BREEDERS was reportedly inspired by a dream Freeman had about his real-life experiences as a father.

Freeman created BREEDERS with fellow Britons writer/executive producer Simon Blackwell (Oscar-nominated for the IN THE LOOP screenplay and an Emmy winner for his work on VEEP; other credits include HBO’s current AVENUE 5, and THE THICK OF IT, as well as creating the series TRYING AGAIN and BACK) and Blackwell’s frequent collaborator, director/executive producer Chris Addison, who is also an actor (DOCTOR WHO, TRYING AGAIN, THE THICK OF IT, SKINS).

ASSIGNMENT X: What’s your collaboration like with Chris Addison? Is one of you better at writing one kind of scenes?

AX: But he’s a co-creator with you and Martin Freeman …

BLACKWELL: But he didn’t write it. I wrote five of the scripts, and then there are five other writers who took the others.

AX: But he’s part of the creative process?

BLACKWELL: Yes, absolutely. And he’s in the writers’ room. When we have the writers’ room discussions, he’s there. He doesn’t actually go away and write a script, though, but he’s part of that creative process of coming up with the stories. 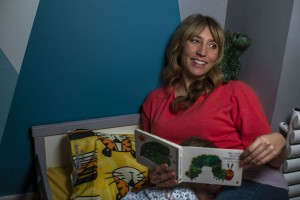 AX: So it’s like, “Perhaps this character could do this …”?

BLACKWELL: Yeah. What we tend to do in the writers’ room is that I just let everybody talk, giving anecdotes about their parenting lives, and then suddenly you think, “Oh, that could be the nub of a story, and let’s see if we can parlay that,” and then everybody’s chipping in to make that into a story.

[Addison walks up at this juncture.]

AX: Now, you were on THE THICK OF IT. Do you have to subdue your desire for creative swearing on BREEDERS, or …?

BLACKWELL: No. There’s swearing in this, but it’s not Malcolm Tucker-style swearing. It’s not that baroque swearing that Peter Capaldi did for us so well. It’s a show that’s full of cursing, but it’s a different kind of cursing.

CHRIS ADDISON: A DIFFERENT KIND OF CURSING? There’s your biography.

AX: Now, apparently Martin Freeman was part of BREEDERS from the start …

ADDISON: It started with him.

BLACKWELL: Yeah. It started with Martin. And then Daisy, she was so great, and there was such a tremendous chemistry between her and Martin, and you absolutely buy them as a loving couple. So there was – it was pretty soon that there would be no Plan B for Ally. We knew who our Ally was.

ADDISON: In the pilot, Ally was not cast when the pilot was written. But obviously, once we opened the writers’ room for Season 1, what we hope is Season 1, everybody had Ally as Daisy in their heads.

AX: Michael McKean plays Ally’s dad, Michael. He’s done a lot of comedy, and also drama, with BETTER CALL SAUL, but McKean is kind of immortal for co-creating and starring as an English rock ‘n’ roller in the mockumentary THIS IS SPINAL TAP. Is that film an institution in England?

BLACKWELL: Oh, God, yes. Everybody who loves comedy can quote every scene. We’ve loved it for years and years. I can remember the first time I saw it on the TV, and thinking for a few seconds it was a real documentary, and then to my joy, realizing what it was.

ADDISON: It’s a proper institution. One of our good colleagues, in fact, I remember, for my thirtieth birthday, he bought me the full SPINAL TAP, with the extra hour-and-a-half of deleted footage and so on. The biggest challenge of this entire show, I think, has been not quoting SPINAL TAP to Michael, just not mentioning it. 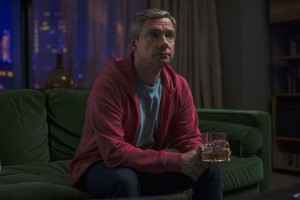 BLACKWELL: It’s part of our lexicon anyway, that you just use some of those phrases anyway, just in your everyday life, so you have to sort of bite your lip.

AX: So you don’t want to out yourselves as SPINAL TAP geeks?

ADDISON: Or you don’t want to do something that’s kind of annoying to the person.

BLACKWELL: Or make them feel uncomfortable.

ADDISON: I remember, it was like when we were on VEEP, and my world is full of SEINFELD references. I say SEINFELD things all the time, and I’d suddenly say something in front of [VEEP and SEINFELD lead] Julia [Louis-Dreyfus], or to Julia, that was actually from SEINFELD, and I’d think, “Oh, this can’t happen.” So yes, we tried to avoid it.

BLACKWELL: We wanted to see Ally’s dad, and then, when we thought of Michael, then we thought, “Okay, let’s get him across four episodes as a major plot point, and let’s have him as a substantial part of the show.”

ADDISON: So in fact, the character was always called Michael, in all drafts. Because by the time that we came to that, we already had him as our sort of Number One choice.

AX: Is he playing British in BREEDERS?

BLACKWELL: No, he’s playing American. He came over [to England], he had a brief dalliance with Ally’s mother, he left quite soon afterwards, and now he’s come back. He’s back intermittently to see Ally.

AX: BREEDERS deals with the fact that relationships between parents and young kids aren’t always idyllic. How do your kids feel about BREEDERS, if you’ve shown any of it to them?

BLACKWELL: My kids like it. My kids are grown up now, so they know some of this is from my experience of being a father, but they like it. They’re comedy fans, so they love Martin, and they love Daisy, so they’re into the show.

ADDISON: My kids have not seen this show. I was thinking about when I’m going to show it to them. Because fundamentally, most of the things Simon and I have made together over the years, over the many years, are too swear-y and curse-y for my younger children. So they’ve not seen an awful lot of the stuff that I’ve done. And I was figuring the other day when I should show them THE THICK OF IT.

BLACKWELL: [this is a joke] Well, you have to remember, we bring our children up still in the Victorian style. So on their fortieth birthday, they get to swear. It’s a ceremony.

AX: BREEDERS is a co-production between FX in the U.S. and Sky in the U.K. How is working with FX?

BLACKWELL: We’re very happy to sign on to FX.

ADDISON: Yeah. FX is a phenomenal channel who produce exceptional things, and the main feeling was, “Don’t f*** it up.”

BLACKWELL: They’ve been so creatively brilliant with us that we would want to work with them as long as possible.

ADDISON: That’s by no means the universal experience with all channels and everybody that you work with. But they’ve been incredibly supportive. And when they’ve given notes, the notes have been smart, ones that you really want to take.

AX: And what would you most like people to know about BREEDERS?

BLACKWELL: That it’s a show that shines a lot on some areas of parenting that we all know about, but we don’t always talk about.

ADDISON: I think if it’s parents watching BREEDERS, I want them to know that this show will make them realize that they are not alone.

This interview was conducted during FX’s portion of the Winter 2020 Television Critics Association (TCA) press tour.