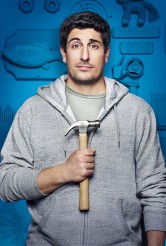 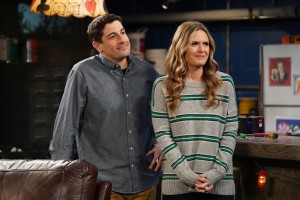 In Fox’s new comedy OUTMATCHED, on Thursday nights, Jason Biggs and Maggie Lawson play Mike and Kay. Mike and Kay are a loving married couple with four children. Three of the children are certified geniuses, which makes life a little challenging for their intellectually normal parents.

Biggs, originally from New Jersey, became famous for starring in the raunchy AMERICAN PIE feature film franchise. Biggs’s TV credits include series regular roles on TOTAL SECURITY, MAD LOVE, and ORANGE IS THE NEW BLACK, as well as voicing Leonardo on the 2012-2014 of the animated TEENAGE MUTANT NINJA TURTLES.

ASSIGNMENT X: Is OUTMATCHED your first foray into doing a multi-camera comedy?

JASON BIGGS: Actually, my first job in television was on this very network, in 1991. It was a multi-camera sitcom called DREXELL’S CLASS, with Dabney Coleman. He played my teacher. It was myself, it was Brittany Murphy, Matthew Lawrence. We did it for one season. That was my first foray. And then done some pilots, and I did some episodes of WILL & GRACE and FRASIER and other things. 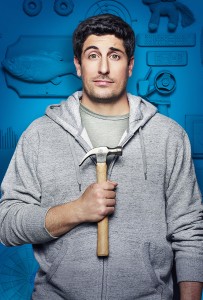 AX: Is half-hour television something you like as an actor?

BIGGS: I love it. The multi-camera, the live audience – it’s kind of a dying art, I feel like, in a way. I love that Fox is keeping it going; there are other networks that are keeping it going, but I love it. It’s a very specific type of storytelling, and for actors, it’s a very specific type of rhythm. It’s like you’re singing a song, and you have to know how to sing that song, and for people that can do it, it’s so much fun. It really is. And I come from a theater background, so having the audience, I love it.

AX: Is comedy your preferred form?

BIGGS: Yeah. I like doing drama, I do. I like doing it more as I’ve gotten older. I feel like I’ve identified more in myself that I’m willing to [reveal]. Drama for me feels like I have to be more vulnerable. Comedy for me is sort of a mask. I’ve always used comedy as sort of a way to hide stuff. It’s a coping mechanism. And so it’s easy for me to go there, and easy for me to do that. It’s much harder to do drama, because you have to be vulnerable, you have to show a lot more, I think, in order for it to work. But now as a parent, and just life has gone on, I feel like I’ve been able to tap into that a lot more. So I like doing drama now, as well. 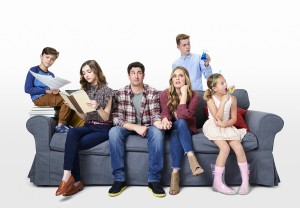 AX: How is playing the father of, and working with, four kids?

BIGGS: It’s great. I have two kids [with wife actress/artist Jenny Mollen] at home, so working with the four kids, I feel like it’s kind of a look into my possible future. It’s fun [laughs].

AX: In what way is this a look into your future?

AX: OUTMATCHED creator Lon Zimmet said that he partly created the show in response to his concerns that his own kids would be more advanced than him and his wife in some ways. Do you share any of that concern?

BIGGS: Oh, yeah, of course. They already are. I’ve got a six-year-old and a two-year-old, and I already have a hard time, for sure. It’s amazing. And that’s why I think the show works, is because we’re taking this idea that parenting is hard enough, and it’s hard to relate to your kids, there’s this generational gap, how do you connect, how do you do it? You’re always making mistakes. But then you add to it the fact that these kids are super-smart, crazy geniuses, and it just makes everything heightened.

BIGGS: A movie called THE SUBJECT that is going to maybe do festival stuff, but OUTMATCHED is it at the moment. 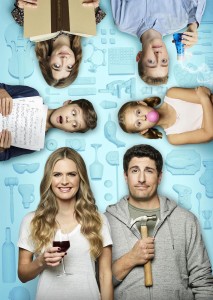 AX: And what would you most like people to know right now about OUTMATCHED?

BIGGS: That it’s really funny, but also, I think there’s a real sweet side to it. I think the relationship between Mike and Kay, Maggie and myself, is sort of the beating heart of the show, and I think people will really relate to it.

This interview was conducted at Fox’s party for the Winter 2020 Television Critics Association (TCA) press tour.