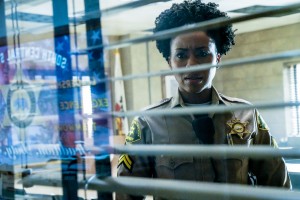 The series is created by Will Beall, but executive producers David Ayer and Chris Long had a lot of input into DEPUTY’s formation. Ayer directed the pilot and Episode 2, “Outlaws.”

Ayer, a Navy veteran who served on a nuclear submarine, is known for his work on feature films, many of which have law enforcement themes. He served as writer and director on the acclaimed LAPD drama END OF WATCH, and wrote the screenplays for TRAINING DAY (Denzel Washington won an Outstanding Actor Oscar for his performance as a highly corrupt officer), the original THE FAST AND THE FURIOUS, DARK BLUE, and S.W.A.T. Ayer also directed STREET KINGS and the police fantasy BRIGHT, and wrote and directed the WWII drama FURY and the DC Comics adaptation SUICIDE SQUAD.

During a Q&A panel for DEPUTY, Ayer explains why he sets so much of his work in Los Angeles. “I grew up in South L.A. and went to school down there, and know these neighborhoods. And there have been a few times where I’ve been back in the old neighborhoods and shooting with a camera. It’s a great neighborhood, great people. I love L.A. I’m from L.A., still a creature of the south side, knew the city well. Or at least I thought I did, because I’m starting to watch the old L.A. sort of disappear under these new buildings, and all the old L.A. getting scraped away. And so now I feel like the scribe that’s documenting it. When I shot BRIGHT, they’re ripping buildings down right next to us. And then the second we cleared the location, they started tearing stuff down. So it’s like the city’s evolving and changing, but I’ll always miss the old L.A.”

ASSIGNMENT X: As the executive producer and director of the pilot, are you the supervising director on DEPUTY? Are you around to set the tone for the other directors?

DAVID AYER: I set the look and sort of created the cocktail recipe and helped create a guide book and a look book and things like that, and then I keep an eye on the dailies and how the photography is working, and every now and then, I have an opinion. 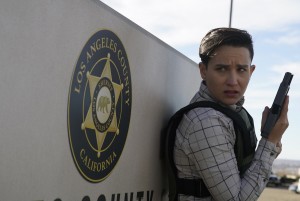 AX: Is there anything different in terms of intensity, or in terms of the way you shoot, for television, specifically with DEPUTY?

AYER: I feel like I took a little bit more chances with it. With film, it’s shots [that are projected onto] on a forty-foot screen. That small screen of television allows you to, I think, experiment a little bit more. So it does have kind of an indie movie vibe to it. But it’s unique. There’s nothing like it out there.

AX: What kinds of instructions did you leave for the other DEPUTY directors?

AYER: It’s a little bit of a challenge, and I think we actually have a budget to add palm trees every now and then, so that’s working. But it actually works very well.

AX: What is the actual jurisdiction of the Los Angeles County Sheriff?

AYER: Well, the Los Angeles Sheriff is an elected official, and he’s the senior law enforcement officer in Los Angeles County. His deputies are authorized to enforce the law anywhere within that county. Part of what they do is interdict fast boats coming into Malibu smuggling drugs. They’ll work down in the harbor. They do a lot of operations in the Angeles Crest National Forest, things like that. They patrol Compton. They patrol unincorporated East L.A. But he has the authority anywhere in the County of Los Angeles, and actually, one of the things we learn is how much power is in that role. In a disaster, he’s the senior law enforcement officer and tells the other regional and local municipalities what they have to do.

AX: In DEPUTY, the political establishment in Los Angeles doesn’t want Hollister to remain as sheriff. If you get a second season, is this going to be like 24, where everything takes place in a very short space of time, or how are you going to keep Hollister in the job over multiple seasons?

AYER: I think that becomes the fun of the show, exactly that. How do you keep him in the job, and does he want to do the job? Does the job become too much, the enemies become too powerful to fight? At what point do you sacrifice your family and your relationships in order to serve in a role that you feel is morally right?

AX: Your characters in DEPUTY are perhaps a little cleaner than some of the people in your films. Is that sort of a fun change, or do you wish you could dirty them up a little?

AYER: Well, everybody does have a bit of a dark side in this, so there is a little bit of complexity, but at the end of the day, they’re more realistic in a sense, more like normal people. So that is fun.

AX: How is working with Stephen Dorff as your DEPUTY leading man?

AYER: It’s great. He’s incredibly talented. It feels like he was born to play this role. I couldn’t imagine anybody else doing this. He’s transformed himself into that character.

AX: Hollister has a fondness for riding horses. Do you enjoy working with horses?

AYER: I like working with horses. They’re big. Don’t walk up behind them, because they kick [laughs]. They’re visual and challenging, but yes, I like horses.

AX: Can you say what else you’re working on right now?

AYER: I’m working on a feature adaptation of THE WILD BUNCH for Warner Brothers.

This interview was conducted at Fox’s party for the Winter 2020 Television Critics Association (TCA) press tour.