The performer chats about the new Fox drama series 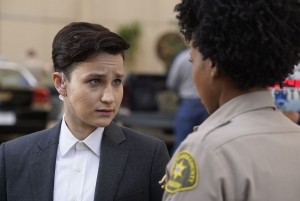 In Fox’s new Thursday-night drama DEPUTY, Stephen Dorff stars as Bill Hollister, a member of the Los Angeles County Sheriff’s Department who, due to a bureaucratic oddity, is appointed acting sheriff. The brass wants Hollister busted back down as quickly as possible.

Fortunately for Hollister, once he’s sheriff, he gets as his aide Deputy Brianna Bishop, played by Bex Taylor-Klaus. Bishop left a promising career in Washington, D.C. to follow their fiancée to Los Angeles, and puts their experience to good use in protecting their new boss.

Taylor-Klaus, who identifies as non-binary, is originally from Atlanta. They have won numerous acting awards for regular roles on THE KILLING and SCREAM: THE SERIES, as well as voice performance on VOLTRON: LEGENDARY DEFENDER MOTION COMIC. Taylor-Klaus’s other credits include arcs on HOUSE OF LIES, iZOMBIE, ARROW, and 13 REASONS WHY, and the films BLACKBIRD, DUMPLIN’, HELL FEST, and THE LAST WITCH HUNTER.

BEX TAYLOR-KLAUS: I have.

AX: So how is it playing somebody on the other side of that, who is part of law enforcement?

TAYLOR-KLAUS: Awesome. And at one point, we get a guest star, I’m not going to tell you which episode, who actually played the sheriff in one of the shows where I got interrogated by him. And now we’re on the flip side. He got to interrogate me last time, and this time, it’s my team that’s interrogating him. It’s great. I love it. It felt like it had come full circle.

AX: Were you looking to do a network show at this particular point?

TAYLOR-KLAUS: I like to work. I’m always happier with myself when I have a job, when I have something to focus on. And as much as I love my real life, because I’ve got a great real life, it is wonderful – I do like having work to dive into on the side. And so I was really looking for something that I could sink my teeth into. I wasn’t looking for network or cable or streaming or anything, I was just looking for a good job that I liked. 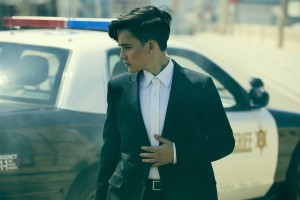 AX: A lot of the other parts you’ve had have been very physical, even though the characters maybe didn’t start out as especially physical people. You wound up having to get thrown around, and throw people around, and so forth. Was any of that helpful in this?

TAYLOR-KLAUS: Oh, yeah. I’ve been doing that my whole life. [laughs] So it’s come in handy for all my jobs. Even if it didn’t start that way, my characters always end up that way, so it makes perfect sense that I’ve ended up here.

AX: Did you do martial arts or something comparable before you started acting?

TAYLOR-KLAUS: Yeah, I’ve done various martial arts. I did taekwondo and American karate, I did crossfit, I did all sorts of things, and most recently, I’ve been doing krav maga and Brazilian jujitsu. My fiancée is very, very skilled, a jujitsu champion, and so it helps me. We get to practice.

AX: Since Bishop’s back story is that they were in politics in D.C., are they going to be helpful in Hollister navigating the political landscape in Los Angeles?

TAYLOR-KLAUS: Oh, yeah. Sheriff Hollister is not politically savvy. Lucky for him, Bishop is. Bishop is definitely an asset in so many ways, not the least of which, politics. It’s going to be a big help, and we’re going to see Bill delegating at least some of the responsibilities to Bishop when it’s just so out of his comfort zone.

AX: You are non-binary. Does Bishop identify as non-binary, or as female?

TAYLOR-KLAUS: Well, I’m not going to talk about how Bishop identifies until we get deeper into the season, because I want to give some time for that to percolate and to really get us to watch Bishop’s trajectory. We will see how Bishop’s identity tracks throughout the season.

AX: Do you feel that TV is now more open to casting non-binary actors than the business used to be?

TAYLOR-KLAUS: I do, and I am so happy about that. It’s so nice to see. Actually, there’s this trans-masc[uline] cohort that I’m part of. It’s a bunch of trans-masculine people in the industry. It’s an incomplete collection, because there are so many of us, and that is so nice to know. But it’s been really cool. Brian Michael Smith is here [at Fox’s portion of the Television Critics Association press tour] for 9-1-1: LONE STAR. He is a trans man, and he is glorious. I absolutely adore him. We worked together on a start-up project recently, and we actually met at the cohort. And we ran into each other in the hall, and it’s just so nice to be able to see other people who identify as trans thriving. 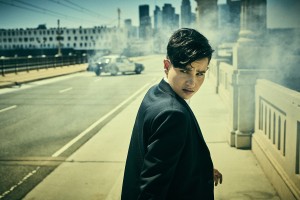 AX: Do you think there’s a particular benefit to having a character like Bishop on a show that isn’t just a drama or a comedy, but that is a procedural, where it’s about entertainment, and the character is just woven into the fabric?

TAYLOR-KLAUS: Right? Absolutely. I think it’s really important to have Deputy Bishop in a show like this. At the very least, it shows young kids who might feel like they have no place in law enforcement that they do. They can do whatever they want, regardless of how they identify.

AX: And what would you most like people to know about DEPUTY right now?

TAYLOR-KLAUS: I have definitely never done anything like this. This is really cool [laughs]. It’s honest, for better and for worse. It’s a cop show unlike any cop show you’ve ever seen in your life, and it’s worth the ride.