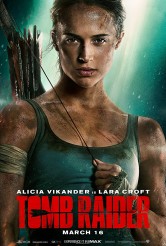 Large on scale, small on impact, TOMB RAIDER is one of those movies that makes it hard to come up with enough informative words to shape a review. It’s okay. It’s not great, it’s not awful, it’s just one of those things that you can watch with mild enjoyment, if no real excitement.

TOMB RAIDER is the origin story of Lara Croft, the adventurous archaeologist who was previously portrayed as a more experienced soul by Angelina Jolie in 2001’s LARA CROFT: TOMB RAIDER and 2003’s LARA CROFT TOMB RAIDER: THE CRADLE OF LIFE. All three films are based on a popular series of videogames. This TOMB RAIDER is said to be drawn specifically from the 2013 iteration of the game, and some shots are pay clear homage to iconic game imagery.

In the new film, Alicia Vikander plays Lara Croft as a young woman who is eking out a living on the fringes of London. It turns out she is actually heir to a vast fortune. However, Lara refuses to accept the money, since that would mean accepting that her missing father, Lord Richard Croft (Dominic West), is actually dead. Lord Croft vanished seven years ago, searching for an island off the coast of Japan that’s supposedly the resting place of a death cult queen. When Lara finds some clues as to where her father might be, she heads off to try to discover what happened to him.

One could argue – and it’s surprising that her corporate advisers (played by Kristin Scott Thomas and Derek Jacobi) don’t suggest it – that Lara could sign the documents, use the money to fund a search for her father and just give everything back to him if she finds him, but this logic would interfere with the plot.

The story moves from London to Hong Kong to an island to (spoiler alert for those ignoring the title and the premise) a tomb. There’s also a genre issue in the third act, but to discuss it would be a major spoiler. Suffice to say there’s a set-up that doesn’t fully pay off.

There are various stunts and hazards and action sequences, some superior, some just okay (how many shootouts does this kind of adventure story really need?). Since director Roar Uthaug is famed for his Norwegian disaster film THE WAVE, it shouldn’t be surprising that he stages a first-rate shipwreck. He also has a great gift in Vikander, who is full of conviction and eminently watchable. Walton Goggins as the chief baddie also invests in what he’s doing – evil though this character is, when he says he just wants to get back to his kids, we believe him. Daniel Wu has a sturdy presence as an ally, though his character starts out with more complexity than he gets as the film continues.

The screenplay by Geneva Robertson-Dworek and Alastair Siddons, from a story by Robertson-Dworek and Even Daugherty, efficiently gets Lara from Point A to Point B, shows what she’s capable of and gives her plenty of chances to run, climb and shoot a bow and arrow. The script and director Uthaug make sure that events unfold at a reasonable pace and the mostly South African locations are gorgeous. However, a lack of grace notes – human moments that make us laugh or jump or feel something that hasn’t been thoroughly foreshadowed – keeps TOMB RAIDER from having much impact. It’s competent and it’s watchable, neither must-see nor must-avoid. In short, to reiterate: the film is simply okay, no more, no less.