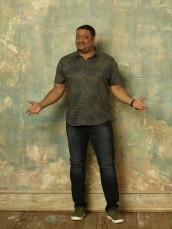 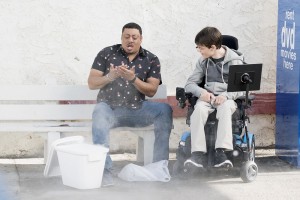 ABC’s SPEECHLESS, now in its second season on Wednesday nights, revolves around the DiMeo family. There are three kids in the family – Ray (Mason Cook), Dylan (Kyla Kenedy) and JJ (Micah Fowler) – but mom Maya’s energies are mainly spent on making sure the world treats JJ right. This is because JJ, now in high school, has cerebral palsy. He uses a wheelchair and requires someone else to voice his words for him. (Actor Fowler, who also has cerebral palsy, is able to speak on his own, but because JJ does not speak in SPEECHLESS, neither does the actor.)

Enter Kenneth, played by Cedric Yarbrough. Kenneth starts out as an employee of the high school where JJ is enrolled. Maya winds up hiring Kenneth to be JJ’s aide and mouthpiece.

In an exclusive conversation, Yarbrough talks about the specific joys of working on SPEECHLESS.

CEDRIC YARBROUGH: Micah is a joy. We work really long hours, sometimes sixteen, seventeen hours a day, and you look at him right now [he indicates Fowler, who is across the room], smiling, always this positive guy. And how can you be angry working with a gem like that? It’s a great honor to work with him, but it’s also just a lot of fun. We have a good time. I really enjoy Micah as a human being. His parents are great stock. I already like him. And I’m hoping that that translates, my real, genuine care for him translate on the show. Because my character really doesn’t know anything about being an aide, has never really worked with anyone with special needs before, but he has genuine care for this kid. So hopefully that translates.

AX: Kenneth starts out working for the high school …

YARBROUGH: He’s a groundskeeper. He takes care of the flowers and we find each other and JJ’s character is like, “All right, that’s the guy to be my voice.”

AX: Does Kenneth ever improve his relationship with Minnie Driver’s character Maya? They seem to have ongoing issues with each other …

AX: Maya spreads some of that equal-opportunity offense to the high-school principal. Does Kenneth feel any loyalty to the principal? Does he feel like he ever needs to stick up for her, or does he think the principal is responsible for her own inability to stand up for herself?

YARBROUGH: Well, yes and no. This is a doctor, so he doesn’t necessarily feel like he needs to stick up for her. But at one point, he also sticks up for Minnie’s character as well. Because we’ve all had a meeting about Maya, we all know about Maya, we all know who she is and a couple of schools that she’s done this to. So I warn her, in the show, about, “We already know who you are. You’re not scaring anybody. We all know, and the principal isn’t scared of you, either. She’s just a very sweet woman, and you’re picking on her.”

AX: Is there more détente or more warfare between Kenneth and Maya this season?

YARBROUGH: Oh, yeah, there’s more warfare, for sure. It makes me laugh. Kenneth is quite musical, and so he lets his feelings be known in a particular song in that first episode that’s pretty funny.

AX: At the start of Season 2, it seemed like Kenneth and the DiMeos might be parting company …

YARBROUGH: They explore the dynamic of the family without him. It’s a little different, it’s a little strange. A lot of that family is circled around him. When he’s out of the equation, it’s a little discombobulating, so we explore that. We ended the [first] season kind of big, with JJ going to camp. We also started this season pretty big and ambitious. We also, throughout the season, explore my love life a little bit, and JJ’s, as well.

AX: Does Kenneth need JJ in any way as much as JJ needs Kenneth?

YARBROUGH: It’s a great question and one that I hope we explore a little bit more. I’ve already pitched [SPEECHLESS creator/executive producer] Scott [Silveri] some ideas where I do help him, but I really want to do an episode where he helps me in a way that I would not have thought he could have. I think that’s where some of the gold is. But yeah, I think Kenneth likes the person who he is when he’s around JJ. We start to explore a little bit who that person is when he’s not around JJ, and if Kenneth likes that person. I really think he really likes who he has become and who he is when he’s with that family.

AX: JJ has been striving for a little more independence this season …

YARBROUGH: I think [one of Season 2’s themes is] finding independence of everyone. I think he wants to be a self-realized human being on his own, and there are certain things that he and Kenneth share, but JJ kind of has to expose all of himself, every part of himself, and I don’t have to. And we explore a little bit of that, like, “You see all of me, why are you hiding? Not just physicality, but some of your whole life. You know everything about me,” as far as JJ is concerned. “Kenneth, why don’t I know more about you?” So we learn a little more about that, talk about it at least.

AX: You were recurring on THE GOLDBERGS when SPEECHLESS came along. Are you sort of in the ABC family, where it came up that, “Okay, we like you, and we’ve got this other show, and we’d like you to come be on it”?

YARBROUGH: Oh, I wish. I wish it was like that. No. I went in and auditioned, like everyone did, and I was the first one cast for a long time. They hadn’t found Minnie and they hadn’t found Micah yet. So I was the only one cast. I really fell in love with the story, I thought it was excellent, I had another project, but I thought this one in the works. I’ve been able to do THE BOONDOCKS, I was able to do RENO 911.

AX: Who are you on THE BOONDOCKS?

AX: You also act on BOJACK HORSEMAN and a few other things. How do you manage your time?

YARBROUGH: Well, luckily there are nine of me [laughs]. No, I’ve been lucky enough that the shows that I’ve been able to be a part of are gracious to let me be on a bunch of shows. Now, doing SPEECHLESS, I’m there a lot of hours …

AX: Were you surprised or just happy with the way BOJACK HORSEMAN has developed a cult following?

YARBROUGH: I’m very happy, because I know the people that are doing it – [BOJACK creator] Raphael [Bob-Waksberg] and [producer] Lisa [Hanawalt], who animates the show – I really like them as human beings. They’re really, really great, and I’m happy for their success. Especially, it’s such an avant-garde, strange show, where so many people really like it, is great. This thing is smart. Getting shows made and having shows that people actually enjoy is a hard thing. And so when that actually happens, I’m happy for those. I’m happy for them.

AX: Do you relate at all to BOJACK HORSEMAN’s take on show business?

YARBROUGH: [laughs] No. I’m not a drug-addicted horse. Not yet. I’m not that jaded yet. Being [Officer] Meow-Meow Fuzzyface on that show, I’ve had my experiences being a cop with RENO 911!, and so when they asked me to do this character, I said, “Hey, I’ve got that voice for you.”

AX: What’s your character like on Showtime’s live-action DICE?

AX: And what would you most like to say about SPEECHLESS?

YARBROUGH: SPEECHLESS is going to make you laugh, and then will make you feel something also. It’s a very funny show, with a little bit of heart. [Season 2] is the same show, but I think we just get to delve a little deeper into who these people are. We get to figure out who this English lady [Maya] is that’s come to America. What is her deal? What’s her family’s deal? What’s Kenneth’s family’s deal? We get to learn a little bit more about JJ’s love life. So we get to delve a little deeper into everyone’s world, and it’s still extremely funny.