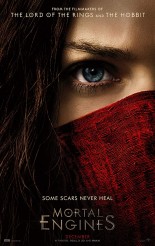 MORTAL ENGINES is such an eyeful that the visuals easily overwhelm the serviceable if fairly familiar plot. The movie, based on the novel by Philip Reeve, is advertised as being from “the producers of LORD OF THE RINGS.” This is true, and it’s also got the same writing team: Fran Walsh & Philippa Boyens & Peter Jackson. Christian Rivers, a longtime Jackson visual effects and storyboard artist, makes his feature directing debut here. MORTAL ENGINES doesn’t have the epic resonance of LORD OF THE RINGS, partly because that’s very difficult to achieve and partly because we’ve got a pretty good idea of how this all goes in the broad strokes. Even so, the film looks like Terry Gilliam decided to try his hand at MAD MAX: FURY ROAD. Everything from interiors to buildings to tire treads to airships to weird furrows in the earth is all so intricate and complicated that we often wish the film would slow down to let us see how all of the physical mechanisms fit together and work. The story and characters, however, though, are much more traditional.

The plot mechanisms work they way they often due in hero’s quest tales. About a thousand years from now, war has reshaped the oceans and continents. The “predator cities of the West” are literally mobile metropolises that roll across the land, preying on smaller but likewise rolling communities. Opposed to this, on the other side of a wall, is the “anti-traction” civilization of more traditionally grounded communities, but we won’t meet these folks for awhile.

Hester Shaw (Hera Helmar), a young woman with a scarred face, gets sucked up into the vast predatory city of London when it ingests the small town she’s riding. In London, she encounters Tom Natsworthy (Robert Sheehan), a young historian with a passion for ancient tech. To say that Hester and Tom do not hit it off at first is an understatement, but they wind up on the run together. Hester has an agenda; Tom simply wants to survive. There’s a sinister plot afoot that will make the world much worse (and partially uninhabitable).

It’s not hard to guess where this is going, but the actors all have charm and conviction. Helmar has no trouble carrying action, with Sheehan providing comedy and smarts as the less brawny of the two. Jihae Kim is splendidly charismatic and authoritative as a warrior and pilot, Hugo Weaving is smooth as the man in charge of London’s military branch, and Stephen Lang gives a nuanced performance as an unusual figure.

The characters have backgrounds, but there’s so much going on that MORTAL ENGINES doesn’t have time to give them many grace notes. This is a case where slowing the pace in a few places might have provided greater momentum. On the upside, director Rivers doesn’t hit any points too hard. When a familiar type of plot twist rears its head, we’re not expected to be astonished, just to accept that it might give someone onscreen a moment’s pause. There’s some messaging about how those who seek power will always disguise their actions as being for the public good, not a new thought, but one that resonates well just now.

It’s hard to argue with the beauty and ingenuity of Dan Hennah’s extraordinary production design. Watching the cities expand, contract and invert themselves like spiky, multi-sided Rubik’s cubes, we’re awed and delighted and ready to see more. Rivers makes sure that we see moving people amidst all of the moving parts. This provides the MORTAL ENGINES world with a sense of life and authenticity. At the same time, the shapes and movements convey whimsy along with the menace.

MORTAL ENGINES is a movie worth watching. If its storytelling were at the same level as its mesmerizing visuals, it would be a classic.