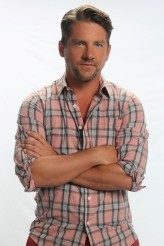 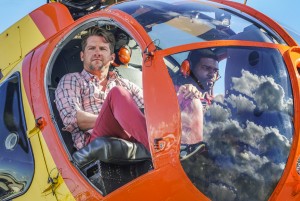 The original MAGNUM P.I., about a private investigator (played by Tom Selleck) in Hawaii, ran for eight seasons on CBS, 1980 through 1988. CBS has had a lot of success rebooting two other successful older series, HAWAII FIVE-0 and MacGYVER, both co-developed and executive produced by Peter M. Lenkov. It therefore seemed natural for the network to tap Lenkov to co-develop and executive producer a new edition of MAGNUM P.I.

In the update of MAGNUM P.I., the title hero is now an Afghanistan war veteran played by Jay Hernandez. However, some things are the same: Magnum is still living in Hawaii on the estate of the wealthy Robin Masters, and he still relies on his buddies.

Zachary Knighton plays one of Magnum’s best pals, Orville “Rick” Wright. Knighton has worked extensively in both comedy and drama, with series regular roles in HAPPY ENDINGS, WEIRD LONERS and FLASHFORWARD among his many credits.

ASSIGNMENT X: Were you a fan of the original MAGNUM P.I.?

ZACHARY KNIGHTON: Yeah, I was a huge fan. That was my favorite show when I was a kid. Actually, always, in my life, I had this idea of moving to Hawaii, and I think MAGNUM is responsible for that.

AX: Did you have any thought of, “Gee, I’d really like to play this character Rick” at some point?

KNIGHTON: No, because at the time, you didn’t think that something like that – this reboot thing is all kind of new. So it all sort of worked out. I oftentimes wish I would have been the young Han Solo. I was a little too old for that. Or the young whatever. And this thing just came around – I always loved Rick in the original, so when I got the offer I was so happy.

AX: How similar or how different is your Rick to Larry Manetti’s Rick in the original MAGNUM P.I.?

KNIGHTON: I guess similar in the sense that Larry was kind of, you would say, the mouth of the show in a weird way, and I am, too. We’re both very free-spirited, with a different style, though, I would say. I think my Rick’s a little bit more – how would I describe him? – a little faster-paced with my guy. Larry always seemed to be enjoying the beach and relaxing, and he was the carefree guy. My guy is carefree, but there’s a little bit of an edge there, kind of walks a little bit more on the criminal side of things.

AX: So your Rick is carefree less in the sense that he is mellow than that he is studiously enjoying Hawaii, while taking care of his business?

AX: Where does your Rick stand on Magnum’s subsidized lifestyle?

KNIGHTON: Well, I think Rick is equally benefiting from Robin Masters. Robin Masters set all these guys up. So he got Rick in the club scene, and T.C. the chopper business, and Magnum is set up, so I know he’s loving life. He loves the fact that he’s been brought into this place, and I think, of all the guys, seems to fit into Hawaii the most.

AX: Where is Rick from originally?

AX: And where are you from originally?

AX: Both a little different climate-wise from Hawaii …

AX: Were you looking to work in a warm climate, or …?

KNIGHTON: I told my agents to find me a job in a great place, and then this came on my desk. So, yeah, it’s a dream come true. I’m a surfer, I’m a sailor, I love everything about the ocean, so Hawaii is a perfect fit for me.

AX: Do they have you surfing in the show?

KNIGHTON: I am. I’m surfing in the vet episode [“Death is Only Temporary”]. TC [played by Stephen Hill] and I, and I don’t want to give away too many plot points, but there’s a vet dealing with PTSD and some issues, and we’re taking him surfing, so it’s a big surfing episode. I’m really excited.

KNIGHTON: I started in drama, and then moved into the half-hour world for such a long time. And that’s why I think this job is great for me is, it’s a perfect balance of the two. This character is kind of the funny guy on the show, and so for me, I get to showcase both sides of my range in this role, and that’s why I love it. It’s just a perfect fit.

AX: Are you crossing paths with the HAWAII FIVE-0 people, since it’s the same network and producers, and they also shoot in Hawaii?

KNIGHTON: We’ve had a few of them on the show. We’re doing crossovers. But we haven’t been on FIVE-0 yet. [Knighton turns to executive producer Peter Lenkov.] Maybe soon, right, Peter?

PETER LENKOV: Oh, yeah. For sure. Did he tell you about the car?

AX: Tell me about the car.

KNIGHTON: Larry Manetti, when he was on the island, he drove a 1974 Mercedes 450 SL convertible. Very beautiful car. It was in the original show, Frank Sinatra drove it in an episode, Tom Selleck drove it in an episode, and now it’s my car. And I just shipped it back to Hawaii, and that’s my real-life car while I’m making this MAGNUM P.I. So I think that’s good mojo for the show.

KNIGHTON: No. You know, this one is like pretty much takes up most of your year. I’ve got some stuff in development. I did just finish my arc on SANTA CLARITA DIET, so I’ll be back on SANTA CLARITA DIET this year as well, but it’s sort of closing out my character on that show. I think I was supposed to go back and do something bigger, but I took this job.

AX: And what would you most like people to know about MAGNUM P.I.?

KNIGHTON: I would love people to know it’s going to be fun, and if you’re looking for that nice little slice of paradise, this is going to be the perfect show to watch.