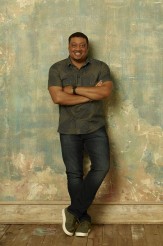 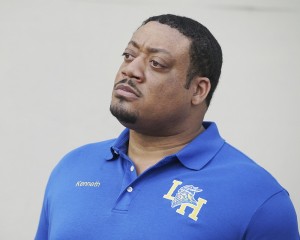 SPEECHLESS, now in its third season on ABC, is airing its Christmas episode on Friday, December 14. The half-hour comedy series has won a Television Critics Association (TCA) Award for Outstanding Achievement in Youth Programming. SPEECHLESS has also earned acclaim from many quarters for its simultaneously humorous and realistic depiction of the way every member of the DiMeo family, including teen J.J. (Micah Fowler), deals with life, including the fact that J.J. uses a wheelchair.

Cedric Yarbrough plays Kenneth Clements, J.J.’s aide. Like his character, actor Fowler uses a wheelchair; Fowler can speak, but J.J. cannot, so Kenneth speaks for him when necessary.

Season 2 ended with the DiMeos losing their home. In Season 3, the family and Kenneth travel to England to ask for a loan from mom Maya’s (Minnie Driver) long-estranged father, played by John Cleese. Yarbrough speaks of his delight at working with the comic icon, and more.

ASSIGNMENT X: What can you say about SPEECHLESS Season 3?

CEDRIC YARBROUGH: Season 3 starts where we left off Season 2, under the stars on the front lawn. And the DiMeos are out of a house, and we’re trying to figure out how to get the house back. They come back and live with me for a little while. That goes exactly how you think it’s going to go. They need to get out of my house. So what we do is, we decide to go to London to hit up Maya’s father for some money, played by John Cleese. So that’s where we start our adventure in Season 3.

AX: How did you enjoy working with John Cleese?

YARBROUGH: Oh, wonderful. He came to play. It was a little intimidating to meet a legend, and also to meet one who’s willing and ready to bat the ball back. But it was also really fun. He loves the show, loves the material, and so it was great. He has such a fun performance. I think the audience is going to really love it.

AX: You and Mr. Cleese are both fairly tall. Is it fun acting opposite somebody who’s the same height as you?

YARBROUGH: Or taller. He’s taller than I am. And it is refreshing to actually look up at an actor. I’m always looking down at somebody, somebody’s always smaller than me. So it was kind of nice to have someone to go, “Oh!” I was the shrimp in the scene. It was good.

AX: Not asking for spoilers about Season 3, but do you have a favorite scene from SPEECHLESS Season 2?

YARBROUGH: I really enjoyed our Halloween episode. It was so weird and wacky, and our makeup department did such a great job of making me into Michael Jackson. And it was so much fun, because I kept getting browner throughout the episode [laughs]. I was getting younger and browner from old Michael Jackson to young Michael Jackson. That was a real highlight for me. I’m a big fan of Michael Jackson, and so to do that, and the writers look at our Instagrams, so I’ve played Michael for Halloween before, so they incorporated it into the show, which is so much fun.

AX: Speaking of Instagram and social media in general, after the ROSEANNE kerfuffle, during which Roseanne Barr got fired for a racist tweet, did ABC come around to everybody and say, “Please watch what you say on social media”? Not that anybody at SPEECHLESS would tweet anything like that, but did the network send out any kind of general message to its personnel?

YARBROUGH: No. No, they have not. They have not come around and said, “Please don’t be racist.” I think we all kind of know, that’s kind of a given, that we treat our human beings like human beings. And I think that’s what our show, and most shows on ABC, are. We are very specific in doing FRESH OFF THE BOAT, BLACK-ISH, THE GOLDBERGS, our show. They’re very specific shows, but in those specifics is a universality of family. And so we’re very conscious of race, of disability. They have not told us to be any more careful than we would be anyway.

AX: Do you have any other projects that we should about?

YARBROUGH: Yes. I have the new animated series PARADISE PD on Netflix. That’s with Tom Kenny and Sara Chalke. And then I have a new podcast that I do, that’s with Audible, called THE HILLS OF BALDWIN.